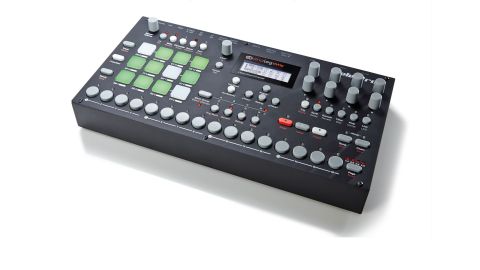 The RYTM sounds massive, it's inspiring and addictive and the sequencer is hugely versatile.

The last hybrid drum machine this writer had the pleasure of reviewing was the Dave Smith Instruments' Tempest in 2012 and since then it's remained unchallenged as the king of analogue/ digital/sample based drum machines. However, the launch of Elektron's Analog RYTM could be about to shake things up!

Out of the box, the RYTM is typically Elektron with its dark grey steel case, monochrome screen and rubberised click-able encoders. The hard plastic buttons used for general navigation and adding sequencer steps are also standard issue Elektron and build quality is tank-like.

The controls and layout will be familiar to anyone that's previously used Elektron gear (especially A4 users) and although the Elektron workflow can initially induce a little 'brain ache', it all becomes second nature after a few days of getting stuck in. Thankfully the manuals are well written too and it's really worth having these on hand to answer any questions, as there's a lot to get to grips with!

At the heart of the RYTM is an eight-voice analogue/digital sound engine (with digital noise/envelopes/LFO) mated to a 13-track sequencer (including an FX track). Each track (except the FX) has a corresponding backlit pressure sensitive rubber pad and each pad/track can currently contain one of nine 'machines' - self-contained synth engines dedicated to making a particular type of drum sound.

You can configure a pad/track to contain a single machine, a machine plus a sample, or just a sample. For example, Pad 1 (labelled BD1) uses a dual-osc machine optimised for making kick sounds and it has Classic, Hard and FM modes for creating different kick types.

Pad number 2 (SNR), plus the clap and rimshot tracks, also use dedicated dual-oscillator machines and each machine type has a specific set of parameters optimised for making that specific type of sound.

You'll also find a machine dedicated to low toms and another machine for mid and high toms (each of which use a single oscillator), whilst the open and closed hats, cymbals (ride/crash) and cowbells use six-oscillator machines.

All the machines work effortlessly, sounding authentically 808/909-ish in character and each has a useful amount of tweakable parameters.

The RYTM's flexible OS architecture also allows further machines/modes to be added in the future and I'd love to see some additional modes for the hats, although having samples available really extends the sonic palette regardless. Already there are rumours of a ring mod bass drum mode on the horizon, so let's see!

What's really great here is that through using the machine concept, Elektron has taken the headache out of creating complex analogue drums.

You want an analogue bass drum? Select the Bass Drum Machine, choose a mode (Classic, Hard or FM) and all the infrastructure is instantly ready to go to make great kicks with no digging about or scratching your head. Want a snare? Same deal, and so on. You don't have to be a master synthesist to make analogue drum sounds here, which means you can concentrate on beat making!

You might also be thinking that it's a pain having certain pads/tracks always hardwired to certain types of sound but this doesn't cause any problems and actually helps to keep things organised.

It's also cool that you can push the machines beyond their intended uses - for example, the BD Machine works as a simple two-oscillator synth and it's just about versatile enough for making basic synth basses and leads, especially in combination with the powerful multimode filter.

Returning to the pads for a second - they are pretty small and currently there's no way to set the velocity curve but they're certainly fine for bashing out beats in real time, which is their main role. Like the Tempest, the pads also light up to reflect their status but the RYTM goes one better showing different velocity levels and modes with different colour backlights.

As well as looking nice, this importantly keeps you abreast of the situation even when complex patterns are kicking off. In terms of Elektron's current product line-up, the RYTM is unique in having pads but, looking beyond these, you can still step sequence just as you would on an Octatrack or A4.

Building sequences is great fun and very addictive and patterns can be easily chained or formed into a song too, though there's no external sequencing (currently). The fact that each pad has a dedicated track makes a lot of sense as you can tap out a beat simultaneously on kick, snare and hats in real time and each part will go to its own track. This is something we always wished MPCs employed as it saves you having to split up a beat into its individual components for processing after recording.

For correcting sloppy performances, auto-quantise is available (non destructive) and it can be set as your default globally, or on a per-track basis. Events can also be quantised after recording and the onboard swing feels great, plus there's slide and accent per-step too. Patterns can have up to 64 steps (16 steps over four pages which is plenty) and the length of each track can also be set independently.

Recording in step mode is simple; just hit record and add steps using the round trigger buttons along the bottom of the front panel. A red LED will then light to denote an event or flash to denote a Parameter-Locked setting.

One of the biggest pulls of Elektron gear (including the RYTM) is Parameter-Locking, which enables you to lock parameter changes to every sequence step. Multiple parameter changes can thus be made per-step by simply holding the respective step's trigger button, selecting the parameter(s) you want to alter, turning the respective encoder(s) and then letting go of the step trigger button.

In addition, you can also Sound Lock which allows you to jump between completely different sounds on each sequence step, making for hugely complex sequences.

Rest assured, the RYTM's deepness makes it a great investment that should keep you occupied for many years and we challenge anyone to exhaust all the sound-shaping and sequencing possibilities onboard!

Sound-wise, there's much to love and it's great that each track has an audio output on the back, plus there's an audio input for processing external audio through the compressor. The RYTM excels at dark twisted electronica and 808/909 style drums but it can do more natural drums/percussion too, particularly when employing the factory/ user samples.

There's plenty of low-end extension and balls, bags of punch in the mid-range and a nicely rounded high-end, although compared to our Tempest, the RYTM is dirtier sounding (and less bright) when using the analogue side but there's not much difference when using samples.

Also, the overdrive effect really helps to bring sounds to life, Elektron's reverb and delay algorithms sound delicious and, though an onboard EQ would have been handy, you never know what might be added in the future.

Elektron's Overbridge software (which promises to fully integrate the RYTM within your DAW) makes this box an even more appealing purchase and it should appear in the next few months.

The RYTM is a powerful and accomplished drum machine that will keep most folks inspired for years. It's deep and sounds superb and we highly recommend it to anyone wanting to take beat making out of the computer.