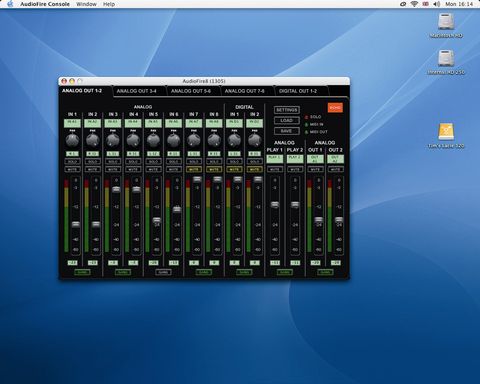 Despite having some limitations, AudioFire's a professional little device that sounds great.

We're spoilt for choice when it comes to FireWire audio interfaces these days, so new arrivals have to offer something a bit special to get noticed.

Echo have been in the soundcard game since the early days - they established a benchmark of quality with their Layla and Gina products - but this is their first foray into the world of the external FireWire box.

On first impressions, the most startling thing about the AudioFire 8 is the lack of clutter on the front panel. There's very little going on, so you don't know whether to appreciate the clean lines or start worrying that it doesn't do much.

Of course, most of the AudioFire's functionality can be accessed through software - it comes with a console program - but take a look round the back and you realise that it does actually have plenty of physical connectivity.

Nominally, the AudioFire 8 under-sells itself, as if you include the digital S/PDIF/AES I/O - as most manufacturers do in their specs - it actually has ten inputs and ten outputs.

It also has MIDI In and Out and even Word Clock In and Out for external digital synchronisation.
As you'd expect these days, it runs at 24-bit resolution and at up to 96kHz sample rate and is both PC and Mac compatible.

The two principal inputs on the front panel are of the auto-sensing universal variety, combining mic, line and instrument inputs on a single socket.

The mic inputs are clean and quiet - the depth and clarity of sound on both vocal and acoustic guitar recordings is impressive.

Cheap mic preamps always sound flat; by contrast, these have a clear three-dimensional sense to them. 'Traffic light' LEDs next to each trim pot give you a rough indication of levels, but more accurate metering is provided in the software.

A phantom power switch covers both inputs and the only other front panel control is a level pot for the headphone socket.

The other six analogue inputs are all on balanced jacks (as are the eight analogue outputs) and a pair of inserts enables the use of external processing on inputs 1 and 2. The operating level can be switched between +4 and -10dBu from within the software.

What the AudioFire 8 doesn't have is any kind of physical monitoring section - if you don't have an external mixer this has to be controlled from the software.

However, it's ideal if you want to build a mobile laptop setup and monitor through headphones. That said, the fact that the unit can't be powered over FireWire does limit its portability somewhat.