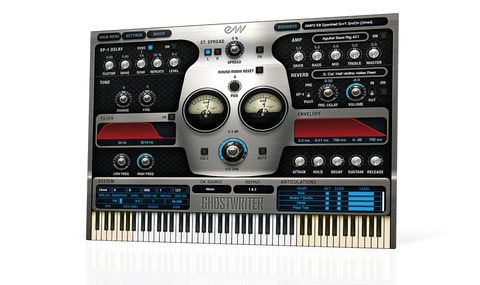 If deep, fascinating sounds, capturing all the energy and soul of the instruments from which they were elicited, appeal, then this is a must-hear.

Producer, solo artist and Porcupine Tree main man Steven Wilson has teamed up with EastWest producer and industry veteran Doug Rogers to produce this 63GB instrumental (plus a few vocals) library for the multitimbral Play engine (included), available on a pile of DVDs or a pocket USB 3 hard drive.

Comprising over 800 multisampled instrument patches, Ghostwriter is aimed at the "cinematic" composer, be they working in movies, games, TV or music. It's intended to be a source of high-quality 'alternative' bread and butter sounds, so we're talking guitars, basses, drums, keys, etc, rather than crazy synths and electronic tones.

The vibe throughout is epic, organic and big; Wilson has true insight into the tasteful use of ambience and distortion, and both are used extensively - and quite brilliantly - in most of the recordings and patches.

The latest version of the Play engine helps here, with its vast roster of convolution reverbs and a superb new amp simulation effect with 80 presets - not to mention the SSL channel strip and EP-1 Delay.

Guitars are by far the best represented category, taking in a staggering array of acoustics and electrics with plenty of keyswitched articulations to aid in creating realistic performances. The diversity of patches in the Bass section belies the fact that only three instruments were used to make them all.

Of the drums, the Mono Amp Kits are the grimy highlight, while the Keys folder is full of splendidly twisted and gutsy pianos, clavs, celestas and more. And although we wouldn't call it a headline, the folder of male and female 'Oohs' and 'Aahs' is sure to be useful for those panoramic movie moments.

Ghostwriter delivers a beautiful collection of instrumentation in an excellent interface. It's not really one for the dance music producer seeking fuel for their latest banger, but if deep, fascinating sounds, capturing all the energy and soul of the electric and acoustic instruments from which they were elicited, appeal, then this is a must-hear.