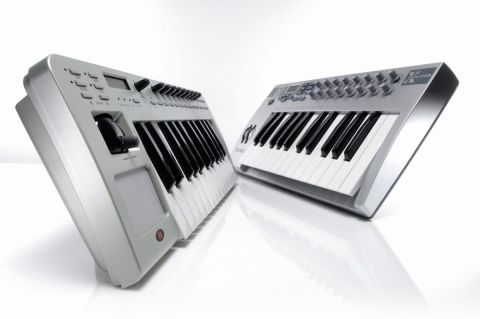 Thumbs up for rotary controllers and keyboard action, but I have niggles with build quality.

Emu's entry in the controller keyboard stakes is an undistinguished-looking, although knob-festooned contender. It's got 16 assignable knobs, which saves you time switching between multiple-page configurations - they're all there ready for tweaking.

The velocity-sensitive keyboard has a good feel and is not as flopsy as some synth keys, although the function buttons are a different story. They positively wobble in their housings and do not inspire confidence in build quality.

The Xboard uses the Performance/ Programming mode model - in the latter mode, the black-and-white keys activate various functions, such as setting the velocity curve. Also, a nifty Latch mode is on hand that keeps a loop assigned to a key on the go while you get on with playing over it.

Drivers from the supplied CD, which also carries the Proteus X LE virtual sound module and Live Lite 4 (Windows only), are required to get it running, but once loaded, operation is straightforward, whether via USB or via the single MIDI Out to another device.

It's not the most exciting of controller keyboards, although plaudits should be given for the number of knobs, and Mac owners may be aggrieved that the software isn't for them.

But as a basic input device it competes well on performance for the price. If Emu could give the buttons more solidity, then the Xboard 25 would be a very neat package indeed.