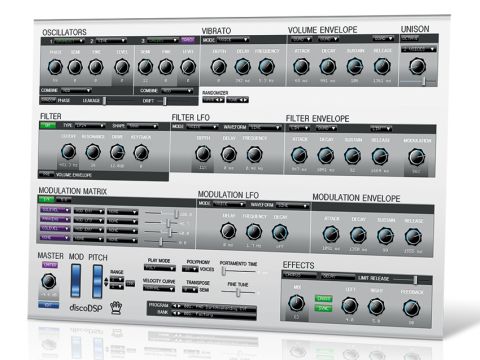 If you're a total beginner, a habitual synth-fiddler or after digital grit to complement your existing synths, try Corona out.

Not the best-known developer in the business, discoDSP has been around for some time. It hasn't released a totally new instrument in over seven years, though.

Corona - a VST/AU subtractive synth with a twist - finally breaks the silence.

Each of Corona's three oscillators can generate a VA-style waveform (saw, parabola, saw, triangle, sine, square, noise) or one chosen from a highly impressive list sourced from some of the finest synths ever made, including Moogs, Rolands and countless others. There's a vibrato section and unison option too.

The synth's stand-out feature is the multitude of ways in which the three oscillators can be combined to create novel tones. Options include addition (ie, mixing), subtraction, multiplication (ring modulation), logical operators such as AND and XOR, and more synth-esque ones like Sync, PM (phase modulation) and Broken PM. There are also modes for tweaking oscillator phase or tuning; analogue drift of internal parameters; and "leakage" of oscillators 1 and 2.

The results vary from subtle and irresistible to dramatic and borderline unusable, offering a huge variety of timbres, including standard basses, leads, some very current glitchy flavours and distinctly additive-sounding patches.

Onto the filters, and here we have seven types, including all the usual band-, low- and high-pass types, plus a 'band-smash' lo-fi filter. There's a filter LFO and envelope, too.

It's pretty standard stuff, and very easy to use. There's also a handy option to apply the filter section before the volume envelope - most useful considering the filter has a Drive knob for saturation effects.

At the bottom of the interface lurks the modulation section (matrix, LFO, envelope) and effects, which are both similarly easy to follow.

Corona does have some good presets: we found about 15 or so that we thought stood out, but out of four banks of 128, that isn't much. While there are good ones in every bank, there are also a lot of fillers - as if too many were made with the Randomizer function.

The banks also feel a little rushed, suffering from inconsistent naming conventions and, in some cases, empty spaces where a patch ought to be. Considering the interesting textures made possible by the oscillator combination system, this seems like a real waste.

Another issue - and one that's not particular to this synth - is the lack of a global effects off. The effects are OK, but there's too much delay on many presets. This means you can't audition the patch properly, particularly in a mix context.

A few of our favourite things

There are a few things that make Corona stand out, and our favourite of these is the interface. While a bit drab aesthetically, it's functionally very good.

It isn't crowded, the dropdown menus are quick to use, the mod matrix is simple and clear, and there are animated rings round the knobs indicating modulation taking place. All of this makes Corona an ideal choice for somebody getting into synth programming, as you'll easily be able to master it and dial in a multitude of interesting sounds.

Other features we like are the four-octave pitchbend range, with independent controls for up and down, and Randomizer buttons for both the waveform type and the entire oscillator section (including waveforms). Then there are the LFO shapes, all of which bring something worthwhile to Corona's synthesis party.

Corona isn't a ground-breaking synth. It can turn out some nice tones, is versatile (if not totally inspirational) and it does have a fairly distinctive sound that can cut through a mix.

It's not among the best-sounding nor most powerful synths we've used, but the oscillator combination options do open up some unique timbres, so real synth-heads might find something to explore.

All in all, then, Corona is interesting but not world-beating. Still, a few years ago, the idea of an easy-to-program synth with unique sonic potential and easy modulation controls would've been heaven. Maybe we're just spoilt these days.

Hear the discoDSP Corona in action...