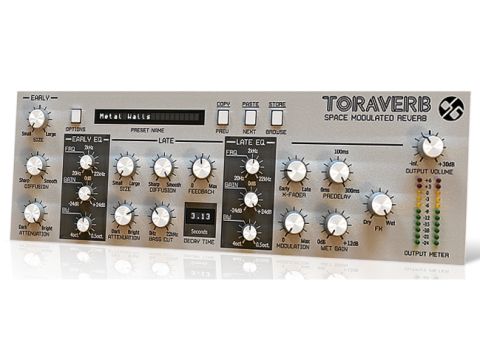 D16 Group deserves full marks for bringing us a reverb of such quality at such a ludicrously miniscule price.

Toraverb is a new addition to D16 Group's affordable SilverLine e­ffects range. Sporting the collection's now-familiar interface style, it's a sexy-looking piece of kit - at least for those who appreciate the kind of old-skool aesthetics that bring to mind a '70s Technics hi-­fi.

But just like the other SilverLine plug-ins, Toraverb's beauty isn't merely skin deep - it has a seriously f­ine sound to match.

The reverb is based around two main sections: Early and Late, with a single-band EQ section for each. The controls are deceptively basic, belying their power, but some of them eschew conventional naming, so a tour is in order.

The Early section is straightforward, with Size, Diffusion and Attenuation controls. Diffusion essentially alters the 'shape' of the reflective surfaces in the virtual room, with higher values causing the reverb tail to become smoother, while Attenuation determines the damping properties of the room's walls.

Following this section comes the ­first of the two identical EQs, each a parametric affair with a Frequency dial (20Hz-22kHz), Gain (+/-24dB) and Bandwidth ranging from 0.5 to 4 octaves. It's slightly limited, but nonetheless ­fits Toraverb's 'keep it simple' ethos.

"The reverb is based around two main sections: Early and Late, with a single-band EQ section for each."

The Late section o­ffers up the same three controls as the Early section, plus two more. These are a self-explanatory Bass Cut knob and a Feedback control, the latter determining how much energy is lost with each re­flection. A handy Decay time value is shown next, based on the settings you've dialled in, and this is followed by the second EQ.

Finally, we get the mixer section, o­ffering a balance control (X‑Fader) between early and late re­flections, a Predelay knob, a Modulation control for adding some movement to the reverb tail and, unusually, a gain control for the reverb section.

This last control is in addition to the wet/dry balance control and is incredibly useful when trying to boost the levels of the reverb without disturbing the dry signal (as merely using the dry/wet control would).

And that's about it, although we should also mention the handy Quality setting, offering four options. They range from the CPU-friendly Low quality (linear interpolation of delay lines), right up to the Highest setting (SINC32 interpolation).

Almost all of the controls are on the front panel, but one or two features are tucked away. In particular, the preset management system, which is very detailed, allowing easy cataloguing of banks.

The number of factory presets is slightly disappointing, but this is balanced by the ease of programming. Plus, the presets do cover the broader bases and provide a good starting point.

Also tucked away is the MIDI mapping section, which enables you to control the parameters using a MIDI controller, and to save presets for di­fferent hardware. And as is standard, assigning parameters is as easy as selecting one and moving the controller that you want it tied to.

So no surprises really, although we do love the ability to type preset names directly into the GUI readout - there's something satisfyingly retro about it! Once assigned, you can automate away, though we reckon Toraverb is usually best set up and left alone.

We've touched on all of the features, but what does this mean for the sound? Well, it's lush. There are no fancy options for switching from Hall to Plate to Plastic Jar - what you get is a really pleasing and potentially huge-sounding reverb. It's versatile too, for such a simple set of controls, working well on just about any type of material.

It won't cover every base imaginable, so for getting that cavernous symphonic hall sound you might want to look at convolution reverb, for example. But what it gives you for the price makes Toraverb an absolute bargain. In fact, since installing it, it's featured in every track we've done. What higher praise can we of­fer?

Listen to Toraverb doing its thing: