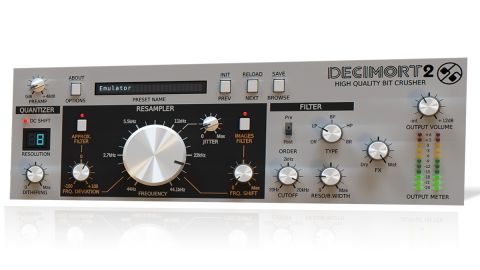 The definitive bitcrusher and sample rate reducer. You might not need it, but you should certainly want it.

Designed to emulate the sound of vintage hardware samplers, the original Decimort was a simple but effective beast, and its successor, Decimort 2 (VST/AU/AAX), is an evolution rather than a revolution.

One of the things about evolution is that it often drops features as well as adding them, and the first thing we noticed about Decimort 2 is that v1's independent left/right controls have disappeared, replaced with a unified stereo control set. It makes everything much clearer but, while we rarely used the stereo function ourselves, some longtime users might miss it.

The Quantizer comes first in the processing chain, ranging from 16-bit right down to 1-bit, and enabling everything from vintage recreation to special effects. The DC Shift button changes how the waveform behaves around 0 amplitude: engaging it slightly softens sharp transients and reduces digital harshness.

The Dithering dial removes quantisation distortion by adding white noise, resulting in a brighter and more accurate (but hissier) sound.

The Resampler is next, with its large central dial dropping the sample rate progressively from 44.1kHz to 44Hz. This is where several of the major additions are found. The first is the Approximative filter, positioned before the resampler.

Then there's the Images Filter, its Frq Shift knob effectively serving as a 'digital harshness' control by removing unpleasant upper-frequency artifacts after resampling, with a response similar to that of a tone dial.

Also new, Jitter introduces random variation to the Resampler, mimicking the dodgy action of old sampling technology. It adds crunch, from gentle all the way to '80s videogame'. Used with the Images Filter, Jitter can deliver fantastic digital distortion with no harshness at all.

Decimort's multimode filter remains unchanged. It can operate in low-pass, high-pass, band-pass and band-reject modes, and has cutoff/centre frequency and resonance/bandwidth controls, plus the option to be placed pre or post Quantizer and Resampler.

The filter sounds great, but an LFO would have made an interesting addition, and could even have been used to modulate other parameters, like Jitter and Resample. Also on our wishlist would be the option to input the left or right signal only, for even more old-school sampling authenticity.

The signal path ends at a global Dry/Wet dial, Output control and level meter. You can choose between Draft, Normal, High and Ultra-quality processing for both real-time and offline operation. Decimort's GUI has two size options.

Despite its simple controls, Decimort 2 is surprisingly versatile, as showcased by its 114 excellent presets, offering a mix of creative gems and uncannily convincing hardware emulations. This increase from the original's 42 presets reflects the enhanced range of effects offered by the Quantiser and Resampler - Jitter and Approximative Filter, mainly.

Decimort 2 is a brilliant update to arguably the definitive vintage sampler emulation. It can be used subtly or obviously as a creative effect or mixdown tool; and while it's certainly not essential, it is an eminently justifiable accessory that comes highly recommended.