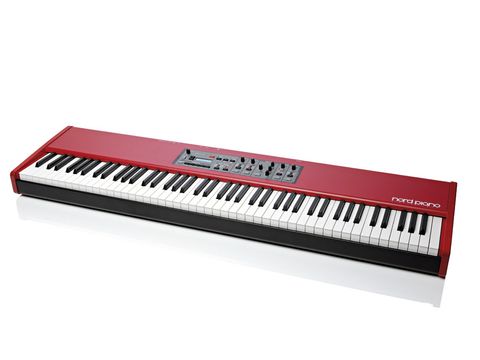 The Nord Piano isn't cheap and it's missing some dials, but it feels and sounds top notch.

Nord pianos are popping up all over the place these days and Clavia seem to have struck upon a good balance of sounds, features and playability that appeals to live performers and studio bods alike. Above all, many dig Clavia's no-nonsense or little menu diving approach.

The Nord Piano is weighty and solid, yet it's just light enough to be carried by one person out of the box or in a soft case, or by two people in a hard case.

All the controls are housed centrally and are easily accessible with either hand and the positioning of the control panel also leaves plenty of space either side on which to sit smaller keyboards, or a laptop.

Now onto the 88-note, fully-weighted keybed; we found this to be very playable indeed. It's not too heavy, nor does it suffer from any of the sponginess that we've found in several other weighted stage piano actions recently.

Fast note repeats are easy, while it's great to play for long periods of time without being fatiguing on the hands or wrists. Also, though it's never ideal playing Clavinet sounds from a weighted keyboard, the keybed is pretty playable for this duty.

Overall build quality is first class, with an all-metal case construction and wooden end cheeks, while the switchgear and dials instil confidence, giving the feel of a premium instrument.

The Nord Piano also ships with a quality three-pedal unit, offering sustain, a soft pedal and sostenuto, which allows one note to remain sustained while the others play as normal around it (much like many grand pianos). This further enhances the Nords authentic piano-like feel.

Feature-wise it's pretty familiar territory for those that have used the Nord Electro or Stage series products. The sound selection area is simply laid out around an informative screen and thankfully you'll seldom have to look at it while performing, just for deeper utility functions and MIDI setups etc.

There are a total of 120 program slots in 24 banks, housed in 500MB of RAM, while the five 'live' program locations continually scan and store all panel settings for quick recall.

As a performer's instrument, the Nord is certainly one of the best and the interface never gets in the way, though we would have preferred it if Nord had added a pitch bend and mod stick for those that would like to use the Nord Piano as a controller.

Other useful features include a +/- six semitone transpose button, and a keyboard touch setting button (that gives you four velocity curves to suit different styles).

Sound-shaping features include two effect busses, a three-band EQ unit with sweepable mid-range, an amp and compressor section and a reverb unit.

The quality of the effects is first class throughout, with an authentic depth to the wah's, phasers, reverb, flangers and auto-panning, while the amp sims have an airy crunch that really adds to the already authentic and musical samples onboard.

These are the same effects that are included in the flagship Nord Stage EX and thus, there's little to fault. Our only criticisms are the lack of a depth or amount dial for the effects (though linking the Phase1/Phase2 buttons or the Pan1/Pan2 buttons gives alternative effect depth variation) but the lack of the Nord Stage's superb analogue-style delay is sorely missed, particularly for treating the Rhodes and Clav samples.

These small issues aside, there is little to criticise. The V5 samples are what we consider to be the most authentic, playable and musical currently available and few other boards come close to the Nord Piano in terms of playability and ease of use.

Somehow the Nord Piano almost tricks you into thinking you're playing a real piano or electric piano and the sound is fantastic. In fact, in some recent recordings this reviewer chose the Nord over a Yamaha U1 upright and that says a lot about its authenticity. The Steinway, Yamaha and the new upright samples record and play brilliantly.

Not only that, but the Rhodes and Wurli Electric Pianos are beautifully sampled too (as are the Clavs, CP80 and Harpsichords) and again we feel these are perhaps the closest you can get to the real thing without using a laptop and samples.

All the highs, bark and growl are there and the new Rhodes Custom Tines and Sparkle-Top samples are stunning (and the older ones are still up there too) the velocity layers are pretty much inaudible and again, the way the samples react under the fingers is spot on.

Add to this the fact that Clavia constantly update their libraries for their users for free and the all round package becomes pretty hard to beat.

To conclude, if the subtleties and nuances of acoustic piano are a huge part of your sound on stage and in the studio, you'll find the Nord Piano a dream solution. For the most authentic-sounding and feeling stage piano currently available, you need look no further.

The Nord Piano should be firmly at the top of your list. With Clavia's great customer support and large online library of sounds, it's an investment that should reward piano-centric players for many years to come.

Now listen to our audio demos to hear a few examples of the Nord Piano's sounds: