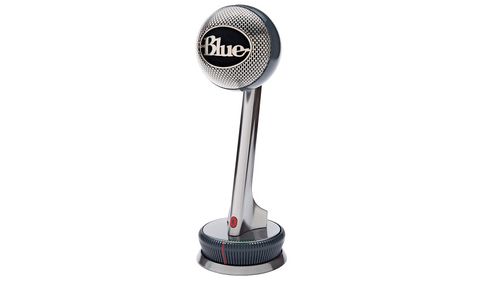 Keep one next to your computer and never be stuck when an idea strikes.

The Blue Nessie is a USB mic (with built-in audio interface) that sports a solid round base and an up and down swivelling capsule that can sit on your desktop next to your display. It's a cardioid-pattern condenser with a built-in shockmount and a zero-latency headphone output with volume control.

Requiring no drivers to be installed, the Nessie is dead easy to set up and use. There are three selectable recording modes - one captures raw audio, while the other two, designed to make recording easier for novices, apply onboard processing: the vocal setting offers de-essing and adds low-end warmth, while the instrument setting adds a touch more top-end.

We got decent results when recording acoustic guitar, but were aware that the in-built pop shield isn't great for close vocals, necessitating the use of an external pop screen or singing from about 300mm away, which captures maybe too much room ambience.

It's perhaps not the optimum mic of choice for serious multi-track recording, but the Nessie is fine for recording sound in the room, making quick demos and podcasting.

There are many reasons why having a recording mic constantly connected to your computer is a good idea, not least the ability to quickly capture musical ideas - that's the Nessie's strength. It's a practical choice for 'quick and dirty' recording.