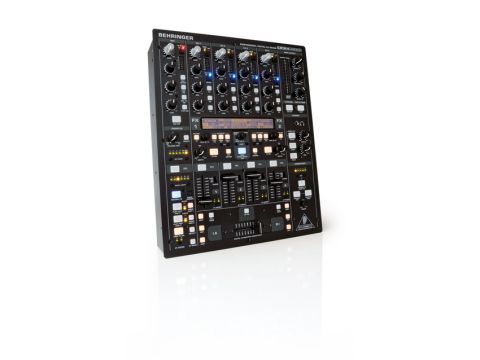 A whole lot of mixer at a ridiculous price. A bedroom classic for the next generation of DJs.

It's got loads of ins and outs!

No-one can deny that the next generation of hyrid DJ mixers is well and truly here. The big players like Korg, Pioneer and Allen & Heath have done the groundwork and laid out the blueprint, so it's about time that Behringer showed up with a similar product at a knock down price.

The DDM4000 is a digital DJ mixer with a typical four channel layout, a two bank sampler, dual effects engines plus it can also function as a full MIDI controller.

The devil is in the details though, and for anyone that cares, they can happily edit every digital detail of this mixer through the large LCD display. From EQ frequencies, fader curves, Ultramiser limiter settings, mic channel EQ and compressor and more.

The mixer has three main pulling points, the first of which is the dual effects bank. Two pairs of identical controls are found in the centre of the mixer, just below the LCD.

After a quick scan of the manual, it's relatively easy to dial up and start tweaking. The nine digital effects are nothing new in themselves, and the sound quality is nothing special, but Behringer have taken a clue from Pioneer and made them frequency selective. This splits the signal into bass, mid and high bands and sends any part of the signal to the effects.

The results are definitely worth it, no more nasty booms and peaks when using the ﬂanger and phaser, echoes and delays can be much clearer without bass, and grungier without hi end. Overall the effects are a lot of fun to play with and with BPM sync on every function, they effortlessly lock in with the groove and feel natural in the mix.

The DDM4000 makes it quick to capture and playback perfect BPM locked loops from any point in the mixers signal path, and adjust the pitch to mix them into the next track.

As well as push button start, the crossfader can be used to trigger loops which quickly became one of my favourite features. Try it with a decent stab sound and you'll know how addictive it can be.

The final big plus is the MIDI controller functionality, making this a true hybrid DJ Mixer for the next generation DJ. Around 81 of the units dials, buttons and faders can be assigned to spit out fixed MIDI CC's and Note On commands, which is perfect for Ableton Live or Traktor as they have comprehensive mapping functions.

It's a doddle to setup, and each mixer channel or control area can be individually switched to MIDI mode, and mixer channels can be muted so no audio passes through.

It's hard to knock this mixer given its price. Nothing comes anywhere close to the DDM4000 for features and tricknology. So if cash is tight or sound quality is not the highest priority, then it's a no-brainer recommendation for the hybrid DJ and live performers.