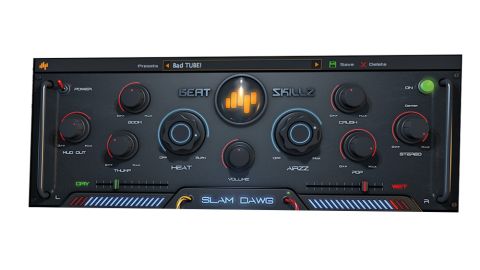 Slam Dawg is far from ideal for mastering, but it offers more than enough to earn a place in your mixing plugins folder.

Slam Dawg (VST/AU/AAX) is the first plugin from Beatskillz, a sub-brand of Beatfactory Academy, the Delhi-based outfit behind the excellent Bollywood Sounds sample libraries.

Essentially a self-contained mastering suite, Slam Dawg is billed as a one-stop-shop for club- and radio-ready masters, and promises "great mixes and beats within minutes". Designed for quick and simple operation, it offers just a single control for each of its seven processes.

Mud Out combines low-cut filtering with what sounds (and looks on an analyser) like a bell- shaped 50Hz boost of 12dB - as you raise the dial, it brings up the main sub bass frequencies while cutting off the messy lower ones. It's a blunt tool, akin to the 'Mega Bass' function on an old Sony hi-fi, but well calibrated. We wouldn't trust it on a master, but as a drum loop fattener, it's certainly interesting.

Sticking with the bottom end, Boom adds harmonics to sub bass frequencies around 60Hz, giving more presence and warmth to the bottom end (similar Waves' MaxxBass). It only goes up to 12dB at the highest setting, so it only covers a reasonably small range, but it affords fine enough control to be useful.

The Thump control is intended to bring out kick drums and bass punch around 110Hz but actually makes things a little boxy, particularly acoustic parts. A small linked cut at around 230- 270Hz could have balanced this out, we reckon.

Compression comes in the form of the Pop knob, which dials in level and punch until about 12 o'clock, after which it generates such pronounced signal pumping on four-to-the-floor material that we had to double-check it wasn't actually applying tempo-synced sidechaining! Again, we'd advise restraint on the master channel, but it is a very useful creative effect.

The Crush component is a limiter, making the signal louder as it's raised. There isn't much room for subtlety here, but it does the trick.

Widening is handled by the Stereo knob. Sonically, this is one of the weaker links in the chain. It does add width - and in a clever way, as a stereo correlation meter placed after the plugin barely twitches, even when Stereo is fully engaged - but quickly becomes a little harsh
on the ear.

The last controls, Heat and Airzz, are meant to enrich the sound, the former offering second-order harmonics for a saturation effect, the latter employing a shelving boost to the high frequencies. Both have their uses, but - yep, you guessed it - are more suited to use on mix channels and groups than the master.

Finally, separate wet and dry level sliders enable parallel processing, followed by a master output level control. The lack of adjustable gain staging along the signal path - as well as the fixed module order and 'one-knob' approach - are a clear indication of where this plugin's strengths really lie: mixing. Even the ten presets back this up, most of them being geared up for creative processing rather than mastering.

As a serious mastering tool, Slam Dawg simply doesn't cut it in terms of tweakability (or metering), and it's this criteria that we have to judge it on. Sonically, however, it really is rather good, and it's certainly worthy of a slot in your channel processing chain - and, perhaps, even as partof your mastering chain on occasion. It could be handy for quickly adding oomph to demos before sending them out, too.