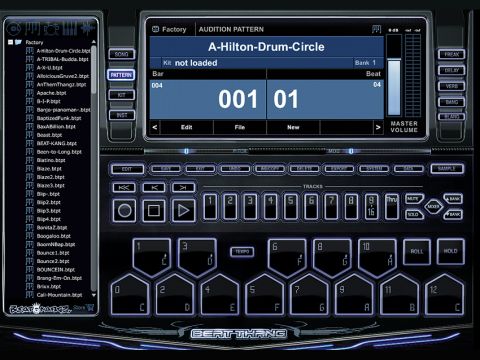 It's not the most advanced MPC-alike, but Beat Thang captures the spirit better than most and has a bright future ahead of it if development goes as planned.

Despite huge advancements in studio and software technology, Akai's MPC series samplers have remained the industry standard beat creation tools among hip-hop producers for over 20 years.

And with good reason, for although there are more flexible and affordable production tools available today, few have ever made the simple act of arranging short samples into loops as fluid or intuitive as Akai's seminal series of music production centres.

Looking to satisfy software-savvy MPC admirers is Beat Kangz Electronics' Beat Thang Virtual - it's a software sampler/sequencer aimed primarily at hip-hop producers and designed with efficiency and ease of use at the top of the agenda.

At present, Beat Thang is a standalone sampler/sequencer, meaning it can't be used as a plug-in instrument within your DAW, although a VST version is said to be in development.

Beat Thang opts for an Ensoniq ASR-X-style drum pad layout, rather than the MPC-style 4x4 grid favoured by most virtual grooveboxes. This makes perfect sense, though, because the QWERTY keyboard lines up neatly with the drum pads, keys A to K and W to U triggering samples on the corresponding pads on screen. Samples can be triggered from the QWERTY keyboard, mouse or any MIDI controller.

A large selection of preset patterns, instruments and drum kits can be loaded from Beat Thang's varied library, which includes over 500 sequenced loops and 3000 samples. The software and its library only takes up around 750MB, which is actually quite refreshing in this age of multi-gigabyte ROMplers.

Samples themselves are, of course, a major selling point of Beat Thang, and the quality is very high throughout. Well EQ'd and with carefully controlled dynamics and low-end weight, you can construct kits using samples from the library almost at random and still expect them to sit well together without the need for any additional processing. Samples can be layered on the pads, too - up to 16 deep, with velocity ranges for each (they can overlap, if you want to stack them up).

There's a wide selection of drum and percussion sounds on offer, as well as basses, guitars, synths and strings. Although there's a good variety of sounds on offer, the majority do tend towards that contemporary hip-hop sound - think more Neptunes and Jay-Z and less Pete Rock and J Dilla. For that reason, the library may be a little too squeaky clean and polished for some producers' tastes.

Beat Thang is also a sampler in the truest sense, as it enables you to capture sound directly from your audio interface inputs (eg, using a microphone), as well as import and edit audio files. The software offers a decent selection of audio- and waveform-editing tools, as well as envelopes, filters and effects, making it a self-contained production platform. There's a basic mixer onboard, and the effects comprise delay, reverb, compression and Freak, which is a multi-effect offering chorus, overdrive, phaser, distortion, vinyl simulation, filtering and more.

Because of its standalone nature, most producers will prefer to use Beat Thang to create loops that can then be exported as audio to be arranged in a DAW. This 'closed' functionality adds to the MPC-like feel of the software, making it a powerful temptation whenever the urge takes you to work on loops and build drum kits. If you want to export as individual sounds for easy mixing, though, you'll have to manually solo and render them out

If you want to make songs entirely inside the Thang, sequencing is very straightforward. Tracks 1 to 8 can each contain their own drum or instrument kit, and sequences can be recorded live, in overdub or replace mode, at a resolution of 960 PPQ. Songs can then be created by stringing together Patterns in a simple list editor.

One noticeable absence at the moment is a step or grid recording/edit mode. Editing recordings is therefore a little fiddly, and if you make a playing mistake, it's usually easier just to rerecord it instead. However, there are such niceties as quantise and swing onboard.

In general, we found putting kits together and creating loops to be a very swift and trouble-free process, and it's clear that Beat Thang was made with plenty of input and direction from producers, and plenty of inspiration from tried-and-tested hardware designs.

There are many more powerful and flexible alternatives out there, but in keeping things just the right side of simple and down to earth, Beat Kangz has succeeded in creating a solid software alternative to the MPC. At the very least, it's a good on-the-road laptop alternative, and thanks to its ergonomic design, it should win over some of those who have been put off by software instruments in the past.

In addition to the software, Beat Kangz is also releasing a hardware Beat Thang. A near-replica of the software, it'll feature two high-speed SD card interfaces (giving access to up to 32GB of samples with super-fast load times), 24-bit effects and resampling, and will integrate seamlessly with the Beat Thang software via USB.

It's designed to be lightweight and runs off a rechargeable lithium battery, which should make it very portable. Being considerably more expensive than the software (it's pitched at $999), and undoubtedly in direct competition with Akai's MPC1000, the hardware Beat Thang may have a tough job winning around hip-hop producers unless it can offer something unique (we're not sure that the 'bling' factor of the illuminated neon-blue interface alone will be enough). There's only a single stereo output on the Thang too, meaning it may lose out to the six-output MPC1000 when destined for studio use.

As for software integration, we're not convinced that many people will pay such a high price for the hardware just to use it as a controller. We'd imagine a simplified, more affordable design that operates only as a control device would make a potentially attractive proposition, though.

With the development team working closely with the user base, plans to open the effects section up to third-party developers, and a fair asking price, Beat Thang Virtual could yet become an essential tool in the modern hip-hop producer's arsenal. The lack of a plug-in version and a grid editor currently count against it quite heavily, however, so we look forward with interest to seeing how Beat Thang evolves.

Listen to some beats created in Beat Thang Virtual: