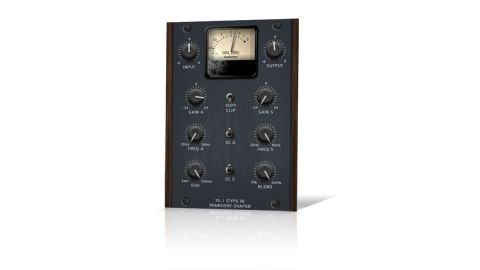 A versatile and creative transient-shaping tool, TS-1's two modes and soft clipping algorithm help it find its own niche.

In 1998, German manufacturer SPL wowed the music production industry with its Transient Designer.

Using just two knobs, it could transform flabby, punchless percussion into sharp, focused drum tracks, and badly recorded bass into smooth, usable low end. But it was expensive... and hardware.

In the intervening years, though, the meteoric rise in computer-based music-making has brought not just two software versions of Transient Designer itself, but a large number of plugin clones and many inspired evolutions of the concept, so Audiority's take on the idea has plenty of competition.

TS-1 (VST/AU/AAX) has a straightforward layout. Up to +/-6dB of input gain is available, after which the signal is processed via two main controls: Gain A (Attack) and Gain S (Sustain). Each of these offers up to +/-24dB of gain adjustment of their respective target elements.

A pair of sidechain filters, with dedicated frequency cutoff dials ranging from 20Hz to 8KHz, help target attack transients and sustain tails, and they can be quite effective, particularly for isolating sharp, treble plucks and hits.

They can also be switched from the unheard sidechain detection signal to the audible main signal, turning TS-1 into a two-band filter bank. The actual transient shaping is done using a single Size control, which affects the attack and sustain portions of the signal, operating as a kind of hold control for the attack stage.

Unlike many transient shapers, TS-1 positively encourages less-than-transparent signal processing, with a non-linear soft clip algorithm applying warm saturation to the output, starting as the signal approaches 0dB and pushed by the Output gain control.

It needs to be used carefully, though, as the signal squashing that it brings with it can easily counteract the separation of attack and sustain.

Finally, there are two distinct operational modes - Type A and Type B - each offering very different results.

Type A is the default, in which the Attack and Sustain signals are simply recombined, with the Gains controlling their respective levels.

Type B, on the other hand, treats negative gain values very differently. It doesn't just attenuate the wet signal; it inverts the control signal and amplifies it, so a negative Sustain value, for example, actually amplifies the dry attack. This results in an almost gate-like action that allows transients to be creatively isolated for a much choppier, more rhythmic vibe.

We don't have many gripes with TS-1, but when first inserted, it instantly changes the level of the sound, even with no gain applied anywhere; and it seems odd that the dry/wet Blend defaults to 50/50, leaving you a little uncertain about what's being done to the signal.

We'd also like to see dedicated input and output level meters alongside the gain reduction meter, and on/off indicators for the switches.

TS-1 is a very solid transient shaper at a very reasonable price, and its onboard saturation opens it up to far more uses than just sharpening up drums.