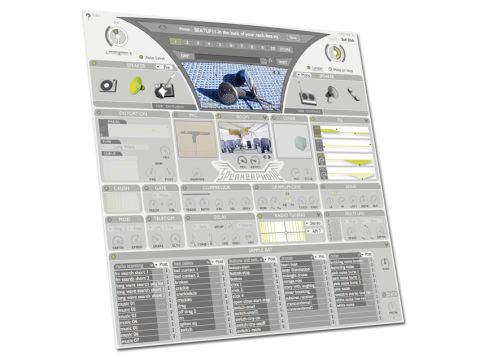 Speakerphone 2 can make any sound exciting - a must have for electronic sound sources.

Convolution allows us to 'sample' the sound of a reverberant space, like a church or a sports stadium, and apply that reverberation to sounds in the studio. The results can be stunningly realistic - with careful use, a convolution reverb can place your mix right in the middle of the Taj Mahal, Maine Road or even your bathroom.

Convolution can just as easily be used to recreate the real sound of guitar amps, hi-fi speakers, even telephones. This is where Speakerphone comes in. Speakerphone enables us to play our sounds through convolution models of hundreds of speakers of various sizes and characteristics, and add details like guitar amp distortion, too.

Speakerphone 2 requires an iLok key and is available as a 5GB download from the Audioease website or as a boxed set. New features include 20 extra guitar amp and speakers combos, this time recorded with four microphones that enable you to take greater control over the amp's sound.

These new additions concentrate on modern amps including the Fender Deluxe Hotrod, first released in 1996, and Orange Rockerverb 50 from 2004. They all sound tremendous, and if you don't want clean speaker sounds, the included guitar amp distortion module can add some grit.

If you're looking for a software replacement for a room full of guitar amps, this is the most true-to-life solution on the market bar none.

There are extra radio speakers and telephones too, but more intriguing are the additions of various microphones and 'Covers'. The microphones include both dynamic and condenser models and sound genuine to our ears, adding a subtle 'realness' to any sound played through them.

The Cover module is more unusual. The concept behind Cover is that most real world sounds are covered or obscured by objects such as a blanket, door or bottle, affecting the object's sound in many ways. In Speakerphone 2, these covers can be applied to your sounds giving them a peculiar muffled quality.

That might not seem particularly appealing, but if you hook up the new Multi LFO to the Covers module, you can adjust the 'pitch' of the cover in real time, moving the characteristics of the cover around in pitch. The sound design possibilities offered here are practically endless.

So with all these new features, what exactly would you use Speakerphone 2 for? The obvious answer is to replicate the sound of telephones, public address systems and many other real world ambiences where speakers play an important role. The built-in sample bay and library gives you myriad sounds to achieve this end.

However, useful as this is, the cleverest way for musicians to use Speakerphone 2 is to use the speaker simulations to recreate the real world 'depth' that's missing from electronic sound sources.

Synthesizer sounds can come alive when you play them through guitar or keyboard amps - Speakerphone 2 gives you these sounds without requiring a studio full of amps and mics. Throw Speakerphone 2 on your synth or guitar sound and you add extra 'air' that's more realistic than adding reverb.

One of the most striking things about using these speaker models is that they sound strange at first - familiar yet unfamiliar. It's not that there's anything wrong with Speakerphone 2's results, it's just that we've gone for so long without hearing the real sound of speakers that we're more familiar with digital simulations. That could be set to change.

Take a listen to some of Speakerphone 2's models: