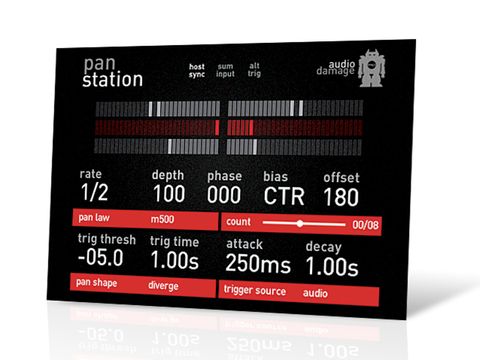 Classic autopanning with new twists, and unrivalled at the price.

For the first couple of decades of stereo recording, fast panning and volume-shifting effects required Olympic stamina, super-human timing and some very durable faders, done, as it was, by hand on the console.

So, a number of machines sprung up to manage this effect automatically, and it's on two of these that PanStation is based. It's inspired by Audio & Design's PanScan and the Drawmer M500.

Why autopan? Well, it can create a very pleasing effect - a moving sound source can quickly catch the listener's interest. More practically, autopanning can help a part fit into the stereo field. By moving around, a part can avoid clashing with others in the mix.

PanStation is driven by two LFOs - one for left, one for right. There are 11 LFO shapes, including typical sine, triangle, square and ramp/saw shapes and some less common ones, like steps, duo sine and converge/diverge. These can give drastically different results.

LFOs can be freerunning or tempo-synced, and the results dialled smoothly from tremolo to autopan using the phase Offset knob. The initial phase can be set with the Phase control, while Bias lets you apply more of the effect to the left or right channel.

For rhythmically useful results, you have two options - and you can use them both at once, if you like. First, there's straight-up host sync of the LFOs.

The other option is to reset the phase of the LFO on the fly; this can be triggered by the incoming signal exceeding the specified Threshold or via a MIDI note. We suggest trying these modes with rhythmic audio/MIDI and the LFO host sync disabled, for 'controlled chaos'.

That isn't the end of the triggering, though. An envelope is also triggered, and this controls the intensity of the effect. There are controls for attack, hold and decay. You can disable it, but it would be foolish not to explore its possibilities.

If all of this seems like hard work, there are a range of presets to get you started.

I am the law

PanStation features a number of subtler refinements that we haven't mentioned yet. One is the sum-input, enabling you to combine the left and right inputs. This is handy if the source is already panned hard left/right, as otherwise it would drop out every time PanStation panned the opposite way.

Also notable is the panning law setting, which dictates the relative volume difference between central and panned sounds. This has a definite effect on the sound levels' behaviour. It's best to adjust it in a mix context, as it becomes quickly apparent which pan law works best.

We only really have one request for an update and that is a dedicated wet/dry slider. The Depth control is effectively the same thing, but because of the way the GUI works - with individually draggable digits - you can't easily drag it through its full range of values using the mouse.

Instead, you have to use a MIDI controller or your DAW's generic plug-in display for real-time automation.

PanStation's biggest rival has to be SoundToys' PanMan - both are modern interpretations of the same type of hardware. Which should you pick?

There are a few features that only the larger PanMan includes, such as the rhythm designer and the ability to modulate the LFO rate with the incoming signal level.

But PanStation offers up a few of the same tricks, such as the trigger counter, which lets you specify how many of the trigger sources must be received before the panning is actually triggered.

While PanMan is unquestionably the more complex of the two, it's also more expensive. We ­find it quicker to get going with PanStation, thanks in part to the vastly superior and clear signal display window.

In an ideal world, we'd recommend both. However, if you aren't the biggest tinkerer then a lot of PanMan's features will go unused - so you might as well opt for PanStation.

PanStation is an excellent plug-in and produces plenty of pan for your buck. The manual explains the possibilities (including gating effects) in far more detail than we have room for here.

It's incredibly useful for creative processing, mix trouble-shooting (far more than our audio demos can show) and even for use as a glitch tool - so it has potential use for nigh-on every computer musician.

Now listen to our audio demos to hear PanStation in action: