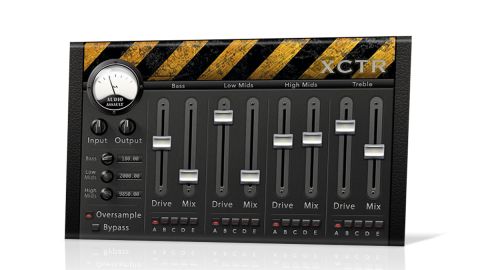 A fantastic saturation-based exciter for creative mixing purposes, and an absolute steal at the price.

There are plenty of multiband enhancers around, but every now and then, a new one comes along to get excited about. That's the case with Audio Assault's XCTR…

Since the 70s, dedicated 'exciters' have exploited all manner of psychoacoustic tricks, saturation, EQ and effects combinations to help give individual sounds more presence and make mixes stand out.

The main modern development in exciter technology, thanks to the power of software, has been to make multiband operation pretty much standard across the board.

XCTR (VST/AU/RTAS/AAX), from saturation specialist Audio Assault, is a straight-up saturation-based exciter, but with multiband functionality baked in, it combines the power of the new with the purity of the old.

XCTR is joyously easy to use. Input and Output knobs give control of the signal levels into and out of the plugin (the former ranging from full signal attenuation to heavy driving of the saturation stage), while a VU meter displays the input level.

We'd rather have slightly clearer meters for both input and output, and the system isn't ideal on groups or the mix bus, where precise metering is essential, but it's not as significant a problem on individual channels.

Next come the crossover controls for XCTR's four bands. The top end of the bass band can be set anywhere from 22-1000Hz, the low-mid from 1-4KHz and the high mid from 4-22KHz. There's also an Oversampling option (for smoother saturation) and a bypass switch.

Each band has controls for Drive, Mix (dry/wet), and disable/mute, as well as a five-mode saturation selector. These modes, which are ported wholesale from sister plugin Head Crusher, can be set independently for each band, and we're pleased to report that they sound great.

The saturation needs to be approached with caution, however, particularly at high frequencies. Even the best exciters are prone to sounding harsh at the top end, and the key to finding the right sound lies in adjusting each band's dry/wet balance; but this is even more imperative with XCTR, as the Drive control (which adds the saturation) seems to come in very strong - even at the lowest setting - and only gets stronger. Subtle just isn't an option without adjusting the mix balance.

XCTR works well on pretty much any signal type - everything from bass, kick drums and drum loops to guitars, vocals and synths can be given presence and character with it.

At the bottom end of the frequency scale, things get really interesting: unlike some other multiband exciters, this one doesn't feature bass compression trickery to tighten up the bottom end (nor should it), but it does impart some rather lovely and genuinely musical distortion. We'd probably stop short of using it for mastering purposes, though - we think it's a bit extreme for that.

XCTR is a fun exciter with far more in its locker than simply adding sheen. It can be a little harsh if pushed too hard, and we wouldn't really recommend it as a mastering tool, but as a creative mix effect, it offers saturation algorithms as good as many plugins costing four times the price.