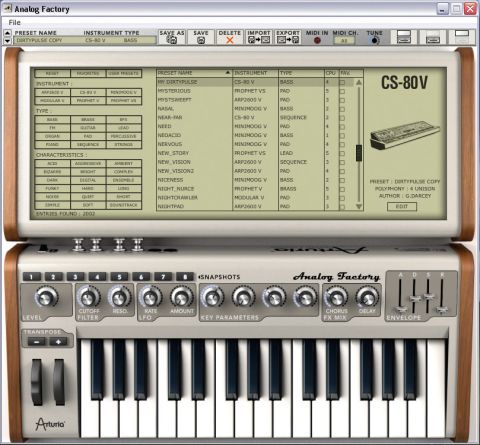 Analog Factory offers great synth sounds in an easy-to-use interface, which is all many of us want. If sound design bores you, give it a try.

There´s no denying that Arturia´s analogue synth emulations look and sound fantastic, but their power and complexity can be intimidating.

Even the most seasoned sound designer would approach something like the Moog Modular V with a degree of trepidation - getting the most out of an instrument with such scope requires patience, dedication and more than a little synth programming know-how.

However, not all of us have the time or inclination to learn our synths inside out and would rather someone else do the hard work for us.

To the rescue comes Analog Factory, a multiple-model-emulating soft synth armed with a collection of 2,000 classic synth presets. These have been created by what Arturia describes as “a selection of the most talented sound designers worldwide” and are accessed via the software´s simple two-part interface.

Half of this is taken up by the Preset Manager, which enables you to select patches either from the full list of 2,000 or by filtering the available selection by Instrument, Type and Characteristics. So if you want a bright Minimoog lead sound, you just click the appropriate labels and watch as the most suitable presets are displayed.

The rest of the interface is home to the virtual keyboard. This also features a basic bank of controls that includes an ADSR envelope, chorus and delay effects, filter cutoff and resonance knobs, and LFO rate and amount controls. It´s all very simple, even when compared to most synth ROMplers.

It should be pointed out, however, that Analog Factory is no mere sample playback engine. It uses the engines from Arturia´s classic synth emulations to generate its sounds, so you can hear the difference between the filters on a Minimoog patch and on a CS-80V patch, for example.

The Virtual Keyboard also features a row of four Key Parameter knobs - these are assigned appropriately for each preset. While they can´t be reassigned, they do give Analog Factory much more depth and flexibility than any ROMpler equivalent - it´s like having a load of specially designed synths that feature just the essential controls.

Analog Factory´s concept is certainly a good one, but the proof is in the prodding.

Once the program has been installed, cycling through the available sounds is simple. The filtering system makes it easy to pick out appropriate presets to audition, though selecting additional categories displays more search results rather than whittling them down. So, if you select Ambient and Bright in the Characteristics menu, all the ambient and all the bright patches are displayed, rather than just those that are both ambient and bright.

In terms of sound, Analog Factory is right on the money. While some of the presets are slightly non-descript affairs, there are plenty of inspirational patches that are great fun to play right from the off. A wide variety of analogue sounds is available - you´ll find acidic leads, full-bodied basses, huge pads and complex FX - and it´s clear that they´ve been carefully programmed.

Many of the sounds are extremely expressive - experienced keyboards players will be in their element - and in lots of cases, the mod wheel is tied to an appropriate control (filter cutoff, oscillator detune, etc).

Although a majority of Analog Factory´s sounds are great - and in some cases, absolutely superb - by its very nature, there are a number of limitations.

To begin with, user control of the FX section is minimal. The absence of anything but a wet/dry knob for the delay effect is a big disappointment, though of course you could add your own delay plug-in effect if you´re using Analog Factory in a host sequencer. Likewise, a glide control would make the portamento sounds a great deal more flexible.

An EQ section would be great, too, though this omission can also be ‘worked around´ with external plug-ins.

While there´s no way to create your own sounds from scratch, it is possible to save out modified presets as user patches, and you can create a list of your favourites for quick access. There´s also a bank of eight snapshot buttons for quick save and recall of different patches and settings - potentially useful for live work.

Analog Factory is no substitute for a full-on synthesizer, but it makes the current generation of synth ROMplers seem lifeless and inflexible in comparison. The price is reasonable when you consider how many presets you get and how good they sound, and even if you´re a hardcore tweaker, it´s a useful library of ready-to-use patches to have in your locker.