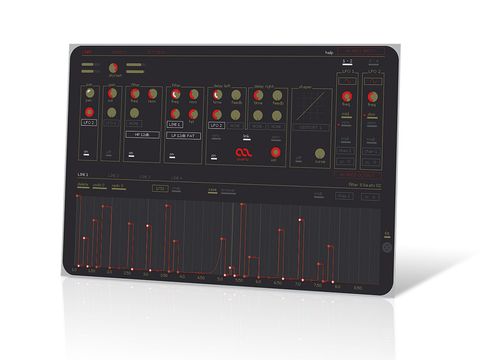 We got our first taste of Artificial Audio's output with the highly impressive spectral multieffects unit Obelisk. Now, a year on, their far-flung ideas have crystallised once more: this time into Quartz, a multieffects unit with an intuitive modulation system.

The effects modules (linked in series from left to right) are pan, gain, two multimode filters, tempo-synced stereo delay and a waveshaper. It's worth noting that each of the filter's modes (12dB low, band and high-pass) features a Fat variant, enabling pre-filter saturation and 4x oversampling.

The modules aren't that complex, but they really do combine well to generate all manner of creative effects, no matter what the source material happens to be.

The beating heart of the plug-in is its sample-accurate modulation system. There are four independent LFOs, running from 0.01Hz up to 2kHz, and from two bars down to a 32nd-note when synced, with dotted and triplet options.

More exciting are the four Modulation Lines, each of which can be bound to Quartz's main effects parameters (but not the LFO speeds, disappointingly). To get going with these, you draw in adjustable curves using up to 100 freely movable points. Each Line can cover up to 48 bars before looping, and points can be snapped to the grid.

Frustratingly, there are no dotted or triplet divisions, although Artificial Audio says that this is on their list for a future update. While the wealth of modulation possibilities makes Quartz ideal for far-out sound design, it has numerous more musical applications too.

For example, we stuck an arpeggiated synth chord sequence through the plug-in and managed to produce everything from rhythmic trance gates, through electronic percussive sequences, to dubbed-out delay patterns.

The plug-in can breathe new life into even the most mediocre of phrases - you might generate underlying swooshes by employing one of the filter or delay presets, or apply creative drumbeat variations via the rhythmic gate patches.

It's easy to take things too far, as evidenced by the motion sickness-inducing 'Stoned DJ' presets, but with judicious use, the results can be thoroughly musical.

One minor gripe is that unused controls are so dulled out that they're hard to see against the background. In fact, the colour scheme in general makes it difficult to distinguish much at a glance. Luckily, Quartz is so well laid out that these concerns fall by the wayside as soon as you've spent a little time working with it.

One of Quartz's neatest features is that it can produce MIDI data. Simply activate the MIDI send for any LFO or Modulation Line and select a channel and CC number to make the program start pumping out the relevant data.

So, if your DAW of choice has a fiddly automation system and you want to create some complex rhythmic parameter movements, you can instead opt to use Quartz as a MIDI control device, taking advantage of its many excellent preprogrammed Modulation Line patterns.

It's also a very quick method of applying the same Modulation Line patterns to multiple parameters of a plug-in or, indeed, plug-ins. External MIDI hardware can be controlled too, of course - simply route the MIDI to your interface's MIDI output.

It should be noted that certain DAWs (eg, Logic) don't support MIDI-sending effects plug-ins, but there is a workaround that's nicely described in the manual.

This plug-in would be at home in any electronic producer's sonic arsenal. The experimental aspects are all there for those looking to create new sounds from old, but it's just as adept at general delayed, gated and filtered effects. Quartz is capable of giving your tracks that extra layer of rhythmic interest and it just might push you in new creative directions.

Listen to a few audio demos of the Artificial Audio Quartz: