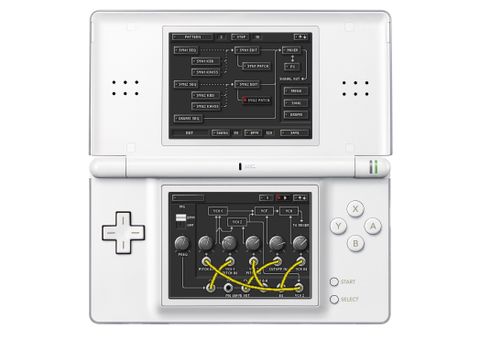 Korg DS-10 is great fun to use and sounds very impressive indeed. It could even tempt synth maniacs to buy a DS solely for the purpose of running it.

Music-making applications for handheld games consoles are nothing new, but usually they're homebrew affairs, and require a bit of tinkering to get up and running.

DS-10, however, is an official release, developed by Korg and game developers AQ Interactive, that features a cutdown emulation of the MS-20 analogue synth. It includes virtual patch cables for modulation routing, and a fairly sophisticated step sequencer.

The app's not out in Europe until October 10, but a Japanese import has been available for a little while.

The software gives you two virtual DS-10 synths and a drum machine. The DS-10 is a 2-oscillator monophonic virtual analogue, with square, sawtooth, triangle and noise waveforms. The oscillators can be detuned and synced to create a variety of tones, and a Balance knob enables you to control their relative levels.

A multimode resonant filter with low-, high- and band-pass settings is on hand, and a simple VCA section enables you to set the drive level and choose gate or envelope generator amplitude modulation, the latter being of the ADSR type.

The DS-10 also boasts a modulation generator with its own routing screen. This can be synced to the sequencer's tempo, and outputs triangle, sawtooth, square and sample+hold signals.

These can be routed to the pitch of either or both oscillators, the filter cutoff, or the overall amplitude level.

The drum machine essentially gives you four more DS-10s to play with, although they feature fewer controls than the main ones, and the parameters can't be altered in real time.

The app also includes a basic effects section with delay, flanger and chorus options. Only one of these can be active at a time, and effects can be applied to either or both synths, the drum machine or the entire mix.

The sequencer features up to 16 steps. Only one octave is visible at a time, so that the interface remains manageable. There are sequencers for note, volume, pan, the two Kaoss controllers and each of the four drum sounds.

Up to 16 patterns can be stored in a single session, and these can be strung together using the song sequencer, where playlists up to 100 patterns long can be created.

As well programming sequences into the DS-10's memory, it's also possible to construct and record your musical ideas live. The synths can be played in two ways: through the virtual keyboard, which behaves in the way you'd expect, and via the X/Y pads, which offer more flexibility.

Three Kaoss pads are available for each synth, and the X and Y axis of each can alter one of a number of parameters. The first pad is set to control pitch and gate by default, so you can play the synth with it. You can even choose which key and scale to play in from a comprehensive range of options, so that the results are always musical.

It's also possible to sync up to five consoles together using the DS's WiFi capabilities and make even more complex tracks, but each console needs its own DS-10 cart to participate.

Korg DS-10 is enormous fun to use, it sounds great, and its limitations encourage the user to push its capabilities to the limit. DS-owning synth fans should do everything in their power to track a copy down - it really is a must-have.

Listen to four tracks that were constructed using the DS-10: