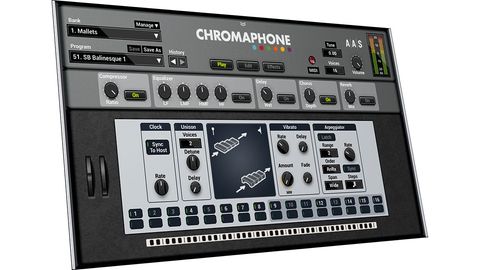 The basic premise of Chromaphone is a synthesizer based around combining acoustic resonators.

In addition to the String, Tubes, Plate, Bar and Marimba, version 2 now offers a Drumhead option which broadens the palette of sounds available far more than one addition may seem to offer. That, in combination with many other new features, makes Chromaphone 2a far more flexible synth than one might imagine.

The user interface is based around three basic views: Play, Edit and Effects. The Play page allows access to performance parameters such as detune and vibrato control. There are simple and useful Effects controls and then there is the Arpeggiator.

While those controls on the right-hand side may look simple, that row of buttons below numbered 1-16 is an integral part of it and makes it a complex and quite unusual beast.

There are the usual range, order and span (width) controls that give you basic control of the arpeggio but the upper 16 buttons allow you to break up the patterns into different rhythms and the lower buttons set the start point of the arpeggio.

With a bit of experimentation it is possible to get some great odd rhythms going, although the one thing we felt was lacking was some kind of swing control. Maybe a future feature? One other thing worth noting is that the big red MIDI light in the top panel tells you when MIDI is coming in but also functions as a MIDI panic button when clicked, and will stop a latched arpeggio. Very useful.

Moving on to the Edit page, here is where the sonic details lie. The first thing to say is that to adjust a knob you can use up and down or left and right for coarse adjustment and fine control is obtained by using the shift, command or alt key.

Then there are the modulation controls. Various parameters can be modulated by different sources and the modulation amounts are displayed as colour-coded lines around the knob being modulated. These can all have positive and negative values and are a neat way of giving you some visual feedback on what is going on.

The first module to be addressed is the Mixer. The resonators can be excited by a mallet and by the noise generator. The intensity of these two 'Exciters' can be individually set and you can also add in some direct source from either.

The mallet is pretty obvious but it's the noise option which really helps to put a lot of the acoustic details into a sound. The Noise module has five filter shapes (including a graphic EQ) and a Q and density control.

With judicious use of modulation parameters you can get some remarkably realistic noises and rattling tones from all the resonators and then well beyond the natural too. The LFO and the Envelope modules do exactly what you would expect of them.

The LFO has five waveshapes, offset and width controls and can be set manually or to sync. Envelope is either ADSR or AHD.

The Mallet module gives you control over the stiffness of the material of the mallet, allowing for some very wide-ranging changes in tonality, and you can add in some noise to the hit and effect the tone of the noise with the colour control.

All of these various control options would be nothing without the Resonator modules and it's here that the heart of the instrument lies. While the resonators can be used individually, it is the combination of them which really allows for rich and complex tones to be created.

They can be set in two modes: coupled or in parallel. Parallel, as the name suggests, simply allows them both to be excited by the same trigger signal, whereas coupled means that one is triggered and then resonates through the other.

As in the physical world, this coupling means that they have an interactive effect on each other; consequently individual resonators settings also affect the resonance of the other.

You change resonator types via a pull-down menu and below all but the tubes you have a quality control which affects the number of modes and therefore the harmonic complexity of the sound. Pitch can be adjusted both as the fundamental and via a pitch envelope.

Tonal colour is adjusted with the material and tone controls which affect the balance of high and low partials. When coupled, the further range of tones available is quite stunning, with some spectacular results, particularly in the percussive and sound design department.

The richness and depth of the bell and mallet tones is exceptional but when you start to investigate the noise elements and move away from the mallets there are a myriad of other sounds available. A very powerful textural instrument which can add a great deal of acoustic realism to the most mangled of sounds.