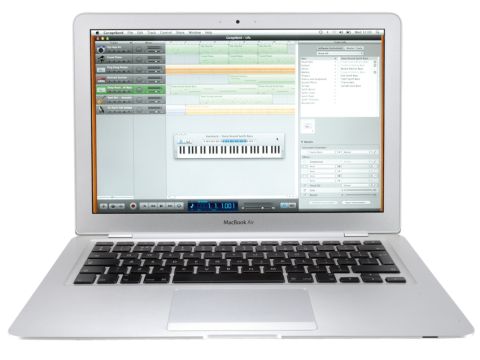 A beautifully designed laptop that´s primed for the wireless world, but serious music makers should spend £100 extra and go for the MacBook Pro.

The MacBook Air´s launch was met with a whirlwind of press interest, with the computer being hailed as the world´s thinnest laptop. Yes, it´s only 0.16" at its thinnest point, expanding to 0.4" at its thickest, and yes, it weighs only 1.36kg. But now that the hype has faded, what we really want to know is whether this could be the laptop of choice for musicians on the move.

Encased in recycling-friendly aluminium, the MacBook Air´s construction is robust yet elegant - just watch out for your wrists on its razor-sharp front edge. The display is a 13.3" widescreen LCD, and with a native resolution of 1280x800, it offers crisp imaging and plenty of on-screen manoeuvrability, including enough screen real estate to run a couple of applications side by side.

The large Multi-Touch trackpad (see boxout) and full-size keyboard are welcome features, especially since many ultra-portable laptops scrimp on these vital elements. In fact, Apple has gone one step further by adding an ambient-light sensor, la the MacBook Pro, which illuminates the keyboard and adjusts the screen brightness in dimly-lit situations, such as on-stage or in the studio.

"As alluring as the MacBook Air is, it makes more sense for music producers to get the MacBook Pro, which has three USB slots, a FireWire port, a comparatively large 200GB of storage, a speedier CPU, a higher-resolution screen, and the aforementioned SuperDrive."

For external devices, there´s a single USB slot, a micro-DVI port and a headphone socket, all tucked away in a hatch on the right-hand side. In addition, there´s a built-in microphone next to the iSight camera at the top of the display. The cooling fans, located at the rear of the underside, are extremely quiet and weren´t picked up at all by the internal mic when we tried it out with Apple´s GarageBand which is part of the preinstalled iLife ‘08 suite.

Our test machine´s Intel Core 2 Duo CPU is the 1.6GHz model, which is the slowest processor speed on Apple´s system roster at the time of writing. Nevertheless, the MacBook Air easily ran Ableton Live with Reason in slave mode, and a whole host of plug-ins to boot (although Live wouldn´t let us use the internal mic as an input). Apple´s decision to install 2GB RAM as standard is good news for those running multiple applications and a bevy of plug-ins, although there are currently no upgrade options.

We opted for the 80GB Parallel ATA hard drive, but if you stump up a further £829, you not only get a quicker 1.8GHz processor, but also a 64GB solid state drive (SSD). However, we´d have reservations about forking out this much just yet as SSD currently offers no real benefit it for musicians (although as with any fast developing technology it´s best to keep an eye on this). The 80GB drive is fairly slow, turning over at just 4200RPM, and could be too small for producers with lots of work on the go. The obvious solution to this problem would be to invest in one of the many affordable portable hard drives on the market as a companion media drive, enabling the system drive to be kept free for current projects. For those who rely on large sample banks or ROMplers, however, the 80GB drive may well not be enough - indeed, the full install of Apple´s Logic Studio takes up about 46GB.

The Apple MacBook Air features a multi-touch trackpad, with which users can ‘rotate´, ‘swipe´ and ‘pinch´ (using two or more fingers) to navigate their way around various apps. For example, it´s possible to pinch the thumb and fore finger to zoom in and out on Apple´s web browser, Safari.

More interesting than that, though, is the possibility of controlling all manner of other applications. If DAW developers embraced this technology, users could potentially tweak plug-in parameters or on-screen knobs with the rotate motion, swipe between multiple screen views, and hyper-zoom a wave file in an instant by pinching.

Apple suggests that you´ll get around five hours´ wireless use without mains power, and the completely sealed machine will need to go to a Mac-doctor once the soldered-in battery dies. With CPU-intensive apps running in tandem - such as music software - you can expect this figure to drop. While this may not affect those using the Air on-stage or in the studio with a power supply, it may hinder users who want to work in more remote locations.

Above all else, connectivity is the major issue with Apple´s beautiful machine; there´s no FireWire port, only one USB slot and no optical drive. Apple is plugging the MacBook Air as a wireless laptop, suggesting that users will be downloading all their software and content in the future, and have accordingly equipped it with a lightning-fast 802.11n Wi-Fi connection. But what if you already own software on disc? Well, then you use the Remote Disc functionality, whereby a CD or DVD can be streamed to the MacBook Air from any other wireless computer, whether Mac or PC.

Of course, if you don´t have another computer or a friend willing to let you use theirs, then this may be a major setback.

Another solution is to pay £65 for an external USB SuperDrive, but then you might as well stump up another £35 and get a MacBook Pro with internal SuperDrive. And that´s really the problem with the MacBook Air, for as far as musicians are concerned, Apple has missed a trick by not including a FireWire port or an audio-in minijack.

As alluring as the MacBook Air is, it makes more sense for music producers to get the MacBook Pro, which has three USB slots, a FireWire port, a comparatively large 200GB of storage, a speedier CPU, a higher-resolution screen, and the aforementioned SuperDrive. Oh, and the MBP now also incorporates the same Multi-Touch trackpad as the MacBook Air. Need we say more?