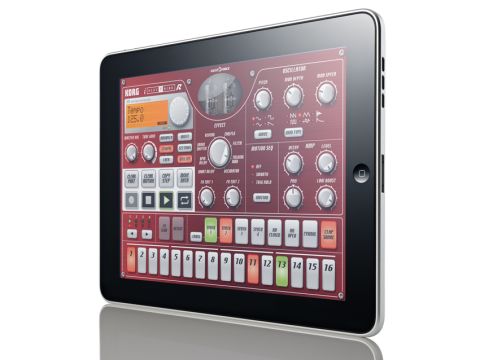 Unless you've been deliberately avoiding it, you can't have missed the hype surrounding the launch of Apple's iPad. And on May 28th, the UK finally got its collective hands on this long-awaited tablet computer.

We've got hold a 16GB Wi-Fi model to put through its paces. We know its media and gaming skills, but what does it offer us musicians and producers?

The first thing you notice about the iPad is its outstanding build quality. The case feels tough while remaining light and easily portable. We wouldn't want to throw it straight into a bag without a case to protect the glass screen, but it certainly feels very solid.

We found the LED-backlit screen to be exceptionally clear and the multi-touch easily tracks ten separate finger gestures at once (in fact, the iPad actually responds to eleven simultaneous gestures). The accelerometer ensures that the screen remains upright, but the orientation can also be locked using a sliding switch.

Firing up some music apps, the iPad's sound quality is impressive, with plenty of power for a unit of this size and bass response that's easily on a par with a MacBook. The one flaw is that Apple has made the strange decision to position the iPad's two speakers adjacent to each other by the dock connector, meaning that the sound output is effectively mixed to mono. This is most likely a space-saving measure, but true stereo speakers would have been much better.

As such, you'll need to plug in a pair of headphones or speakers to get the best results and, thankfully, the 3.5mm audio output has a low noise floor and clean digital-to-analogue conversion.

"No multi-touch controller comes close to the iPad in terms of value for money, versatility and power."

The wide variety of music apps already available for the iPad make it useable straight out of the box. As a multi-touch controller running TouchOSC the iPad is fantastic, offering most of the functionality of a dedicated device like JazzMutant's Lemur or Dexter for just a fraction of the cost.

TouchOSC alone could be the killer app necessary to win over electronic musicians. At less than a third of the price of the Dexter, no multi-touch controller comes close to the iPad in terms of value for money, versatility and power.

As far as it being a 'Lemur-killer', if you'll excuse the hyperbole, it's yet to be seen how the iPad survives in the beer-soaked, reckless arena of live performance, so no conclusions can be drawn as yet.

Apps like TouchOSC rely on Wi-Fi connections and having heard reports from the US of cripplingly unreliable reception we feared the worst, but over the course of a couple of weeks testing in a number of locations, we didn't experience any problems.

Whether it's as a result of the wireless card or (as we suspect) the iPad's version of Safari, web browsing is also lightning fast, with pages loading quicker than they do on our MacBook Pro.

And even with Wi-Fi on, battery life was even better than the claimed 10 hours. After leaving videos playing for 10 hours, we were amazed to see that the iPad still displayed 12% battery life remaining.

Apple sceptics have already picked fault with the device's specifications, citing its 1GHz processor, 256MB RAM and relatively small storage space as major weaknesses. The iPad is less powerful than a MacBook and more expensive than a Windows netbook, but these downsides are offset by the stunning multi-touch screen and the unit's ease of use. Even the iPad's major bugbear - the lack of multi-tasking allowing you to run a groovebox app while checking your mail - is being fixed in the iOS 4 update.

As to whether you'll be able to run a synth app on top of your production app, that's up to Apple and whether they'll allow multiple audio apps to share the system APIs via their draconian App Store rules. If it's a stretch too far for the A4 processor the company may force developers to remove the option so as to 'protect you' from embarrassing slow down.

The success of the iPad for musicians depends almost entirely on what developers can bring to the table. And for us, the most exciting question isn't what it can do on its own, but how it can improve our existing technology.

The iPad can be anything from a fun handheld synth to a capable multitrack DAW, but it really comes alive when you're given the chance to use it with the rest of your studio gear. The iPad could turn out to be one of the best multi-functional studio tools on the market.

It's just a shame that simple, user-friendly basics such as a USB port are missing, making any kind of 'easy' integration that little bit more hassle. That said, we predict all kinds of add-ons via that 30-pin connector and enough MIDI interfaces, old school synth editors, clones of retro gear and drum machines and innovative new music apps to keep anyone knee-deep in inspiration.

For most of us, the iPad might not be cheap enough to justify its purchase, but as more and more music-making apps become available we expect the device to gather a significant following and become more essential among forward-thinking music makers.

The real value of the iPad ultimately comes from the apps. For now the jury's out, but if you do buy one, you'll just have to hope that the software developers repay your faith in the hardware. We can't wait to see where the technology goes from here.