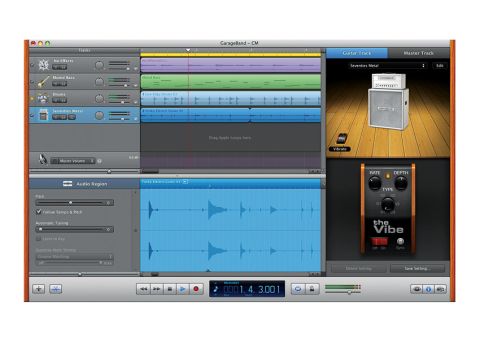 Certain elements of GarageBand could still do with a refresh, but the new features will thrill producers and players alike.

When Apple launched GarageBand back in 2004, many assumed that its future would be as a loop-based, drag-and-drop music creation tool - it was explicitly designed for beginners and came with thousands of Apple Loops, after all.

However, as the software has evolved over the past few years, it's become a go-to application not only for aspiring songwriters and other musicians who want to record themselves, but also for established artists who see it as the ideal demo-maker and scratchpad.

Even Nadine Coyle of Girls Aloud fame recently told a national newspaper that she's become "obsessed" with GarageBand - and where Girls Aloud go, who are we not to follow, right? Right.

The great news is that GarageBand is now available on its own from the Mac App Store for the bargain price of £8.99, but you can also get it as part of the iLife '11 suite (also containing iPhoto and iMovie), which costs £45. And, of course, it ships with all new Macs.

For the GarageBand '11 update, Apple has continued to take the software down the 'proper musician' path, adding several features from its pro-standard Logic and some that are exclusive to what now feels even more like Logic's friendlier baby brother.

As we shall see, the focus is on correcting bad playing and teaching you to play better in the first place.

First up, there's Flex Time, the technology that made its debut in Logic Pro 9. Put simply, this gives you hands-on control of the timing of audio, enabling you to grab and move waveform transients (the sharp 'peak' at the start of each note).

It's all beautifully simple: double-click an audio clip in the Timeline and its waveform appears in the editing pane at the bottom; then you can move the start of any note forwards or backwards, as well as adjusting its length.

GarageBand '11 analyses the file for Flex Time adjustments when you make your first edit, and a button enables you to toggle between the altered and original files.

Flex Time does a great job of sorting out minor timing errors 'naturally' (particularly on monophonic parts) while also giving you a tool that can be used creatively. What's more, given that GarageBand is an application that's often used by musicians who are still honing their chops, its inclusion here makes total sense.

The new Groove Matching functionality is cut from similar time-based cloth (and also comes from Logic): it enables you to extract the groove of one track and apply it to all the others in your project.

Simply choose and activate your Groove Track by hovering over its track icon and clicking the star that appears. The groove is then applied to all other parts, although you can deselect any that you don't want to be changed.

In practice, Groove Matching works splendidly. You're not likely to use it on every piece of music you make, but if you want a quick way of locking a bassline and rhythm guitar part to a drum track (for example), it does the job admirably well.

The final toys to have been borrowed from Logic are the seven additional guitar amps and five new stompboxes, all of which have slick graphical interfaces and can be mixed and matched. Although they're not officially labelled as such, the amps have been inspired by (among others) Marshall, Orange, Fender and Mesa Boogie, and they deliver the tone-shaping goods.

We're sure there'll be some Mac-happy axemen who'll use GarageBand exclusively as a virtual rig. We also got good results by running other sounds (organs and electric pianos in particular) through the amps and effects.

Other newbies can be found in the Learn To Play section, though there's no new functionality for lovers of Magic GarageBand. That said, we're not sure anyone really loves Magic GarageBand anyway…

Away from the main GarageBand application, the software's Learn To Play features - which were introduced in the '09 update - have been spruced up for 2011.

To begin with, there are 22 new guitar and piano video lessons (these can be freely downloaded as and when you want them) that vary in style and difficulty. Following these is just as pleasurable and rewarding as it was before, and you now have the added bonus of the How Did I Play? mode.

In true Guitar Hero/SingStar style, this feature gives you constantly updated feedback on how well (or not) you're performing the music that you're supposed to be learning. Your pitch and timing are both analysed, and the overall quality of your recital is aggregated into a percentage score that draws your eye to the bottom of the screen.

The incentive to keep practising and upping your game is provided by a graphical record of your 'scores' for each lesson.

Based on our experiences, the system does work - you do feel compelled to have 'just one more go' and beat your best score. How Did I Play? is bound to encourage more than a few kids (and plenty of adults, too) to become better pianists and guitarists, and that can only be a good thing. Well played, Apple!

So, where does that leave us? If you're a Mac-owning musician who wants an elegant and efficient multitrack recording solution, not only does GarageBand give you an easy entry point, it'll probably be all you need (providing you can get by without a dedicated mixer with aux sends).

In fact, this remains a great first DAW full stop, though it has to be said that its focus does now feel skewed towards those who want to record real audio and away from producers who work totally 'in the box' - ie, purely with virtual instruments, samples, etc.

If Apple can make tasty guitar amps and effects, we have to ask why they can't knock out some funky synths and drum machines. The addition of a few more cutting-edge Apple Loops wouldn't go amiss, either.

Still, you can get around these limitations by using third-party plug-ins and samples, and you can't really argue with what GarageBand offers. It gives you powerful technology, simply implemented and beautifully presented.

Now listen to our audio demos to hear a few examples of GarageBand's new features:

Groove Matching - Listen to a before and after example. In the after example, the drum track is the Groove Track and the piano (audio) and bass (MIDI) are locked to it. No further editing was done beyond automatic Groove Matching.

Flex Time - A before and after example of an electric piano progression.

Guitar amps - Listen to a selection of the new amps.