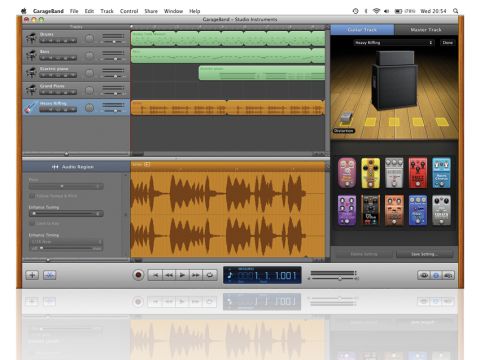 The best version of GarageBand yet, but if you only want to employ it for music production, you won't be missing out on much if you skip the '09 update.

When we recently suggested to Apple that deciding what new features to add to GarageBand must be difficult - the company must continue to give users a reason to upgrade to its Logic products, after all - the response was a nod and a wry smile.

In some ways, the software has become a victim of its own success: pros now use it to draft their tunes, and many home users find it to be so comprehensive that they simply don't need to buy anything else.

So, where to take it next? As before, the application ships with the latest version of the iLife software suite, and for the GarageBand '09 update, Apple has gone off on something of a tangent.

As we'll discover, this is good news for people who want to learn to play music, but not so great for those who use GarageBand for production purposes.

Boot the software for the first time and you're presented with an updated splash screen that lets you choose from a range of options. You can now pick from a range of project templates (eg, Songwriting Loops, Piano, Acoustic Instrument), and each of these provides a different configuration of pre-loaded tracks for you to work with.

It's a nice enough touch, but sadly, there's currently no facility for adding your own template(s).

You can also choose to enter Magic GarageBand mode, which automates the process of creating songs in a variety of styles.

This has been extended slightly since GB '08 - there's now level adjustment, an Arrangement Track, randomised selection of instruments and even a recording option - but it's still very much aimed at total novices.

Speaking of beginners, the opening splash screen also provides access to the new Learn to Play feature, and to the Lesson Store, from which you can buy Artist Lessons (more on these later).

Click through to the main GarageBand application and the first thing you'll notice is that several cosmetic changes have been made.

Your selected Software Instrument is now accompanied by a nice graphic in the Track Info section, and the Loop Browser now appears to the right of the timeline, rather than below it.

Most obviously, the software's main background colour has turned darker than the light grey of before, with the result being that GarageBand now looks very much like a baby version of Logic (which is essentially what it is). It's no more intimidating, but the '09 update does feel a touch more 'pro'.

Appearances can be deceptive, though - dig a little deeper and you realise that, from recording perspective, the GarageBand feature set has actually changed very little. One area that has been addressed, however, is that of guitar amp and effects modelling.

These types of processing were included before, but they weren't considered a standout feature. This time around, you get a dedicated Electric Guitar option when you create a new track, and choosing this puts the Track Info panel into its Guitar Track mode.

This gives you an amp graphic at the top (you can choose from five models) and a selection of ten stompboxes below.

A decent selection of presets is included, and these are named in such a way that you usually know what you're going to get before you call them up (examples include Bluesbreaker, Honky Tonk and Seattle Sound).

You can also create your own guitar rig: up to five stompboxes can be used in each preset, and both these and the amps are editable via their tidy interfaces.

The sound is pretty respectable, too - Apple confirmed to us that the technology behind the new amps and effects has come down from Logic Pro, and just that little bit more quality is audibly evident.

It's clear from the way Apple is marketing GarageBand '09 that the new features it's most proud of are those that fall under the Learn to Play banner.

Specifically, we're talking about nine Basic Lessons for both piano and guitar (one of each comes as part of the installer, and the rest can be downloaded with no further charge) and the Artist Lessons that are available from the all-new Lesson Store.

The standard piano and guitar tuition is good - though, obviously, spending plenty of time practising your instrument remains the key to learning how to play it - but it's the Artist Lessons that are the real coup.

For £3.95, you get a sumptuous high-def video guide that features a celebrity musician teaching you one of their most famous songs on either piano or guitar. The likes of Sting, Ben Folds, Fall Out Boy, OneRepublic and Norah Jones have already signed up, and Apple say that more artists are going to be working with them in the future.

The lessons feature notation, tab and chord displays, as well as a virtual keyboard/fretboard. What's more, they're brilliantly presented - the only snag is that you'll need to have an Intel processor rather than a PPC model in order to run them (and the same goes for the Basic Lessons, too).

Overall, though, Learn To Play is seriously impressive, making most other on-screen tuition look positively antiquated.

Like its predecessors, GarageBand '09 is a pleasure to use, but given that we're partly reviewing it from the perspective of an existing user who's thinking of upgrading (those who buy a new Mac will get it pre-installed anyway), we have to say that we're a little disappointed.

From a production point of view, there's simply not enough here to justify spending £69.

It feels like Apple has made a conscious decision to hold back on adding any more DAW-type functionality, presumably to entice those who are outgrowing GarageBand's features to upgrade to Logic, which is a shame.

It's also worth bearing in mind that, if you want to run GarageBand '09, you need to have OS X 10.5.6 (Leopard) installed. If you don't already own this, that's another cost (£83) you'll have to take into account.

There is a bigger picture to consider, though. GarageBand '09 ships with three other excellent apps (iMovie, iPhoto and iWeb), and we're well aware that many people use these, too.

If their new features (and there are quite a few) appeal, iLife '09 is a no-brainer; but if you don't play guitar and have no desire to learn either that instrument or the piano, upgrading to it on the strength of the GarageBand update alone would be a mistake.