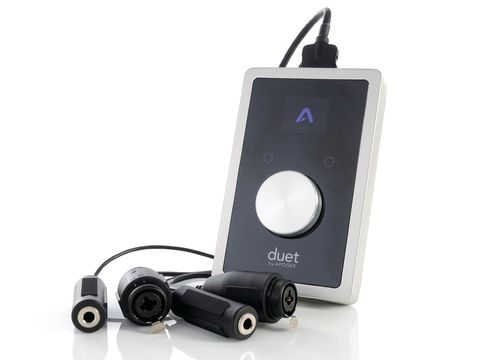 With improved sound, I/O and design, Duet is a worthy update to Apogee's original.

Duet 2 is, as its name suggests, a second-generation, dual-channel audio interface made by Apogee for the Macintosh.

While this updated release has given Apogee an opportunity to address several key features of Duet's capabilities, it has also afforded the company the chance to overhaul its design - as the original 'silver' Duet echoed the corresponding generation of MacBook Pro, so Duet 2 matches the aluminium and black plastic design of the 2011-generation laptops.

The updates are more than skin-deep, however, so let's dive in.

Interface made for two

The package contents contain the interface itself, which is of a compact desktop design, an audio break-out cable containing twin hybrid XLR/1/4" jack inputs (Duet 1 featured XLR inputs only) as well as an optional power lead (the unit is otherwise bus-powered) and the all-important USB connection cable.

Mindful of future-prooﬁng, this is the ﬁrst notable change - whereas the ﬁrst Duet offered connection via FireWire 400, the absence of this port from new Macintoshes has clearly prompted a re-think.

There's no install CD, so a quick trip to Apogee's website ensures a combined package offering the software and a ﬁrmware update for the unit is downloaded as one.

Thereafter you're up and running, ready to record and playback, with the latter now offered via an independent headphone port (notably absent from Duet 1) as well as the stereo outputs. Duet 2 uses Apogee Maestro 2 software to conﬁgure inputs, with the option to toggle between Microphone and Instrument sources, select gain levels and enable phantom power.

However, the most notable update is the audio quality of Duet 2, which is a considerable improvement over its predecessor, thanks to redesigned microphone preamps and updated converters. It's worth noting that few of Duet's rivals offer audio I/O with this quality.

Once conﬁgured through the Maestro software, many of Duet's settings can also be controlled direct from the front panel where the prominent silver knob allows you to dial values in or press to jump between input and output routings.

These settings are supported by the new full-colour display at the top, which is neatly designed.

Above the silver rotary on the left and right are two user-assignable buttons, which the Maestro software will allow you conﬁgure with a fairly extensive range of options for, including useful 'summing to mono' options for the outputs, which is useful at the mix stage.

There are cheaper audio interfaces than those provided by Apogee across their range but the ﬁrst thing to note is that if you're Mac-based, you'll struggle to ﬁnd a company whose approach is so tailored to Apple's product-range, with rock-solid integration guaranteed.

The audio quality of Duet 2 is extremely good too, blowing most of the competition away not just among the array of cheaper interfaces available but also out-performing some of those retailing for higher prices.

While we always think break-out cables don't provide the most professional-looking solution, we're aware that this is simply personal taste and that the implementation of a combined cable here makes perfect sense, allowing the Duet 2 unit to ﬁt snugly in a laptop bag.

If you can live with limited I/O, this is a great interface choice for Mac devotees who prioritise audio quality above all else.