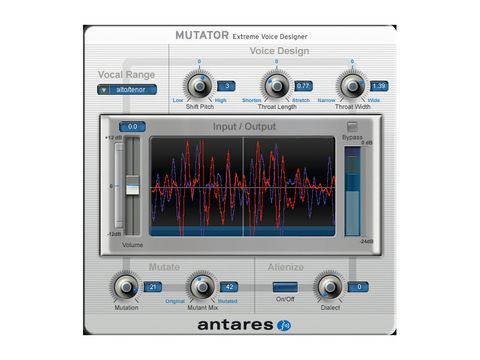 It's not the best general-purpose vocal toolkit, but Avox 2 could be a great secret weapon for the creative producer.

Antares' original Avox bundle comprised five radical vocal processing plug-ins. These are all included in Avox 2, as are five new ones.

The most notable of the original suite was probably Throat, which uses physical modelling to replicate the sound of the source vocal tract, so that its character can be tweaked and adjusted, just like a virtual instrument. You can add more breathiness, alter the perceived throat size, and tinker with the glottal waveform.

Although it's a powerful creative tool, we found it tricky to get realistic results from. You can't push it too far or the voice will sound false, but sometimes that might be appropriate.

Duo and Choir are also retained from the original set. Duo creates a copy of the input vocal and uses variations in timbre, vibrato, pitch, timing and panning to create the impression of a double-tracked recording. This sounds quite natural, and is very useful. If you want to thicken a vocal part but can't record a second take, Duo beats a standard chorus effect.

Choir works in a similar manner, generating four, eight, 16 or 32 additional virtual voices, providing the same variations as Duo. The clincher is that Choir sounds better on sources that already have multiple vocal tracks, and it works to increase the perceived number of vocalists. Again, the results are pretty good when used in moderation.

Punch is a lot like a limiter in operation, but the results sound similar to gentle compression. If you're uncomfortable with compressors, it's a great solution for evening out the dynamics while adding - you guessed it - punch.

Sybil is very much a typical de-esser - ie, a configurable, frequency-specific compressor - and it works well enough.

Avox 2 also includes Harmony Engine, Mutator, Articulator, Aspire and Warm. The most substantial of these new additions is Harmony Engine - this retails separately for £189, so to get it in the box represents great value for money.

It works a little like Duo or Choir, except this time there's more control over tuning. You can use Harmony Engine to build complex harmonic arrangements, employing up to four virtual voices on top of the original source. If you don't supply a MIDI signal, Harmony Engine enables you to select from a plethora of static presets.

This works well if you only need a very basic arrangement, but the real magic begins when you hook up a MIDI device and play in the specific harmonies you'd like the voices to follow. In fact, it's as easy as dragging and dropping chords from another MIDI part in your project onto the track that controls Harmony Engine - this way, you can create appropriate harmonies in no time at all. We'd certainly describe it as a pleasing sound, if not quite the same as recording separate takes.

Mutator is quite unlike most vocal effects you will have encountered previously. If you've ever wanted voices that sound like something from another planet, it's well worth a try.

It starts with a pitchshifter, which is accompanied by control over the throat length and width, but things really start to get freaky in the Mutate section. This provides ring modulation effects, with the interesting twist that the pitch of the signal tracks that of the input. This seems to push the voice forcibly through time and space until it gets to the point where it sounds entirely robotic. It's an interesting effect, but its practical uses might be somewhat limited.

The Alienize and Dialect controls cause Mutator to systematically reverse segments of audio, creating subtle, granular effects - or what sounds like a whole new language. It's not very good at natural alterations, but we assume that it's not meant to be!

Articulator operates like a vocoder, requiring two inputs to work to its full extent: a carrier and a modulator, here dubbed Audio and Control signals respectively. You'd typically set a vocal source as the modulator - Articulator extracts its formants and amplitude modulations before imposing them directly onto the second sound source. The result is that the carrier seems to talk or sing, mimicking the vocal input.

Without a secondary input to modulate the signal, Articulator uses an internal noise generator, which sounds a little weird, but will surely have numerous studio applications, such as the creation of some interesting 'whisper' effects, for example.

Aspire operates solely on the breathy element of a voice, without affecting harmonics in any way. You can use it as a noise removal tool, or to increase the breathiness of a vocal take. As insane as this sounds, it works rather well on some sources, usually when confined to very gentle settings.

Warm is essentially a reincarnation of Antares' now discontinued Tube plug-ins. The basic premise is simple, and nothing you won't have come across before: it's designed to emulate the subjective warmth induced by driving audio into high-end valve gear, such as expensive microphone preamps. When loud peak transients pass through such gear, they're distorted in a way that most people find pleasing to the ear.

What's really special about Warm is that the sound is exceptionally accurate when compared to that of real vintage equipment. It sounds about as close to the real deal as you're ever likely to get using software. What's more, it has an extremely low CPU overhead and, as Antares suggests, you could quite comfortably run an instance on every channel in your mix, even with a modest system.

While there are better-sounding alternatives for many of these plug-ins, a few of the options provided here are quite unusual. They're certainly all very intuitive, and there aren't any duffers, as far as we're concerned.

Avox 2 works very nicely on non-vocal sounds too, though it's worth remembering that almost every processor is designed primarily for use with monophonic material. Getting hold of the lot in one bundle is appealing, so if you're not already sorted for this kind of thing, Avox 2 is a great buy, albeit a moderately pricey one.

Listen to the Avox 2 plug-ins in action: