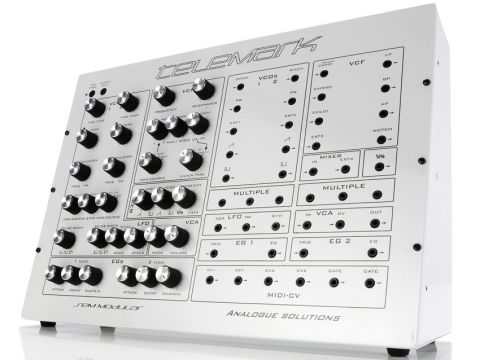 The Telemark won't be for everyone, but it fills its niche very well.

Analogue Solutions is a British company that specialises in the manufacture and modification of analogue synth-related gear. It produces a range of synths, all utilising different architectures and methodologies, some of which emulate the design of classics from the past.

The Telemark is an expanded version of the earlier Semblance synth, which in turn was manufactured as a newly recreated and MIDIfied version of the original Oberheim SEM (Synthesizer Expander Module) from 1974.

The Telemark builds on the Semblance by adding a right-hand panel full of signal patching points. This in effect turns it into a semi-modular design, and means it can be interfaced to other modules and synths very easily.

So, why resurrect a synth design from over 30 years ago? The original SEM was initially intended as an extension module for other synths. The architecture was a relatively simple two-oscillator affair, with two envelope generators, an LFO and a single filter.

While the Minimoog - the benchmark for most non-modular monophonic synths - had three oscillators and a beefy 24dB/octave low-pass filter, the Oberheim's two oscillators and 12dB/ octave filter seemed a bit lacking on paper. The SEM made a name for itself, however, partly because the filter design also allowed high-pass, band-pass and notch filtering, but also because it eventually become associated with a certain type of sonic smoothness.

The SEM was also used en masse in some early polyphonic Oberheim synths that are still highly sought-after and hugely expensive.

The Telemark is a sturdily made white metal wedge, populated on the left side of the panel by lots of knobs and a few LEDs. The right side is devoted to a series of 1/8-inch sockets designed to provide access to core points in the synth's signal path.

The back panel has a small socket for the supplied external PSU (a bit of a shame, but not a major problem), MIDI In and Thru, as well as 1/4-inch jack sockets for the main audio output and two external audio inputs. So, from the outset you get a piece of hardware that looks the part - and what's more, it's made in the UK.

Our first impression when just using the fixed architecture is that the Telemark is an easy-to-use and fine-sounding synth. Despite the relative simplicity of the envelopes and other modulation options, it is capable of a wide range of sounds.

The filter may lack the bite of steeper-cutoff designs, but the synth still transmits warmth and drive. Using the patch panel adds another dimension and offers some great options for processing external audio as well as transforming the internal palette.

The MIDI spec is basic, but does give the Telemark the ability to respond to both note on/off and velocity information for VCA and VCF sections. The patch panel allows you to route these elsewhere should you need to, and a MIDI controller can be assigned to modulation duties should you wish.

It is unusual to get so much space on a front panel, and it does make life a lot easier. Remember also that there are no sub-functions or hidden parameters as far as the synth programming goes - what you see is what you get - as the knobs are hard-wired.

While the ability to use the front-panel patches to alter the fixed architecture adds a lot to the abilities of the synth, it really comes into its own when teamed with an analogue sequencer (such as the Analogue Solutions Oberkorn 3 that I was fortunate enough to test) or bolstered with some other modular synth components for additional modulation and processing capabilities. This is perhaps missing the point, however, as the Telemark is best thought of as a simple-to-use MIDI-controlled analogue synth that can be extended as and when required.

In our experience, for certain types of sounds there's lot to be said for a functionally simple architecture, and complicated modulation options can prove a barrier to getting the job done. The biggest test for many analogue synths is what they sound like raw, be it just the oscillators in all their unfiltered glory or when passed though an envelope-controlled filter with a touch of resonance. In both of these instances, the Telemark shines.

There are no preset memories or any other kind of digital control apart from the built-in MIDI capabilities, but we see this as more of a creative plus point. MIDI-wise, the Telemark is competent, but our wish list would include the ability to control each oscillator's pitch and the two EG triggers on separate MIDI channels.

We imagine this wouldn't be too tricky to implement and could open up the possibility of providing another front-panel CV/Gate output for separate synth control. Certainly, this won't be a deal-breaker for most prospective users, but it could add great functional value.

If you're looking to buy your first synth the Telemark is probably not for you, given its lack of polyphony and particular tonal palette - but then, it isn't really aimed at the first-time buyer. Like its older sibling the Semblance, it's aimed squarely at those musicians who are looking for that Oberheim SEM module sound - not Moog, not Arp or any other.

We have always been a big fan of the SEM design and Oberheim sound, particularly as so many synths, virtual or otherwise, seem to try and emulate the Minimoog, though often unsuccessfully.

Analogue Solutions will happily provide you with one of their other synths, based on other architectures, if that's what you're looking for, but if the SEM sound is your bag, then you should seriously think about giving the Telemark a go - you won't be disappointed.

Listen to the Telemark in action: