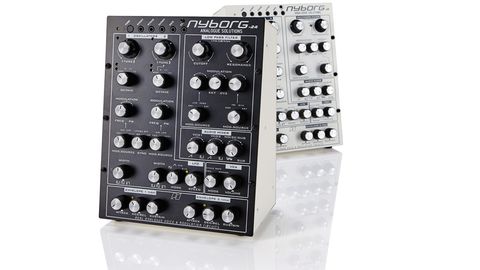 If we were in the market for a grown-up analogue monosynth, we would certainly put the Analogue Solutions Nyborg units on our short list.

Analogue Solutions has been a purveyor of home-grown and well-regarded analogue synths for over ten years.

The key thing that connects its gear is theheavy reliance on discrete electronics in its synth designs. This means they eschew the use of digital circuitry in all but the necessary nod to the modern world in the form of MIDI interfacing. This also means no CPU control of envelopes or LFOs, and not a DCO in sight. It's old-school analogue.

The unit up for testing here is the Nyborg 24.

The units arrives in a market that is seeing an ever growing number of 'real' analogue synths, from Korg's large-scale resurrections to boutique modular units - so competition is fierce.

According to Tom Carpenter, the man behind Analogue Solutions, the Nyborg 12 and 24 were created in response to the demand for smaller, lower-budget instruments, but that didn't compromise on sound. So, in many respects the Nyborg 12 is very much a trimmed-down Telemark. You lose the patching sockets and Ring Modulation option, which of course makes for less flexibility, but there are some gains, as we'll see.

The Nyborgs employ two multi-waveform, independently tunable oscillators combined with a square wave sub-oscillator and noise source. The Audio Mixer section allows you to adjust oscillator level and waveform selection (sawtooth of pulse) for each oscillator, and add the sub or noise into the mix, but sadly not both at the same time - this is perhaps an inevitable compromise on such an instrument.

There is plenty of flexibility in the VCO tuning department, including the option of turning either oscillator into an LFO-like mod source. The reasons become clearer when you turn to the modulation switches, which allow one VCO to modulate the other (and vice versa) and for them also to come under the control of an external audio source or the built-in envelopes.

In each case you can choose the modulation source to be routed to changing oscillator frequency or pulse width. Oscillator Sync is equally flexible, and even includes the possibility of VCO2 slaving to the LFO. Besides the PWM option, oscillator pulse-width can be dialled in manually for each VCO.

The filters section is where the two Nyborgs part company and, though VCOs play a massive role in any synth's overall character, it is here that you find two different classic approaches to tonal shaping. The Nyborg 24 has a four-pole 24dB/octave resonant low-pass filter, similar in design to the AS Leipzig's Moog-style transistor ladder filter. Here you get something that can dig quite heavily into the raw oscillator output, for recognisably ballsy sweeps, and a bucketful of resonance, if required.

One nice feature in the VCA section is the possibility of having the VCA triggered by a note-on or gate signal (with or without the full envelope shaping) or re-triggered by the LFO.

The final part of the sonic equation is the LFO which has triangle and square wave modulation signals. You can also route Sample and Hold or CV2 (velocity) signals to the VCF and VCOs.