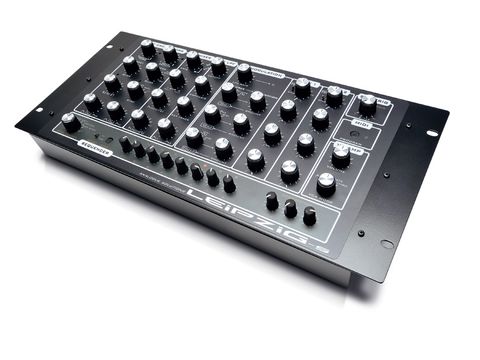 A flexible synth that excels at raw and percussive tones. The sequencer is a great addition.

Analogue Solutions has a fine array of products including the Telemark SEM clone, the Europa MIDI sequencer/drum computer, the Station X portable modular/patchable synth and the Leipzig range (rackmount Leipzig-S and Leipzig-K keyboard).

We were very impressed with the original Leipzig when we reviewed it back in mid 2008 - its good balance of features and 100% analogue sound matched to a sensible price has since gained it many fans.

Build quality is solid and the tough 5U metal case can sit on your desktop or be rackmounted. The panel labelling is printed on a tough Lexan polycarbonate sheet (as with Moog and DSI) and so should stand up to rough handling, while the switchgear/dials are sturdy.

This time, the LEDs are red and orange instead of the bright blue on the original and the Minimoog-style wood has gone. Power is supplied by a Wall Wart.

In terms of basic sound generation/operation, the Leipzig-S is largely the same as the original and sounds vintage yet modern, appealing to both camps. It's a dual discrete VCO synth and each oscillator has two waveforms (Sawtooth or Pulse) though there is still no sine/triangle option for smoother lead/bass sounds.

The VCOs sound rich and punchy, are stable, warm up time is quick and the Leipzig-S's general character lies somewhere between a Mini/Multimoog and a Korg MS20. It excels at snappy percussive tones, effects and basses, as well as the usual detuned and sync'd leads and the signal path distorts when pushed, which adds to the mojo.

Oscillator 1 and 2 differ in a number of ways. Oscillator 1 has a manual pulse width control for thinning or thickening the square wave, while Oscillator 2 has a sync dial and can be synced to Osc 1 square, the LFO square wave, or an incoming external signal.

Osc 2 can also be detuned or set free from MIDI note control by switching MIDI pitch off. This is great for atonal and drum/percussion sounds.

There are handy independent glide controls for each oscillator (like the Prophet-08) and pulse-width modulation controls where the square waves of each oscillator can be modulated by the LFO or by envelope 2 for more complex evolving textures. Unfortunately there are no legato or multi-trigger modes.

The mixer section has been updated to accommodate the new sequencer audio option but otherwise remains mostly the same as the Leipzig. The levels of Osc 1 and 2's saw and square waves can be blended, pushed hard into the VCA/filter for a more saturated sound and a sub oscillator added, while the level of the external two input signal can also be attenuated, the sequencer audio switched into the signal path and white noise added.

There's plenty to keep you going; we recommend making patch sheets for favourite settings, as there's no onboard recall. That said, we really dig the no nonsense approach to this machine - it's all about pure sound creation and exploration using your ears and no menu diving.

The Leipzig-S's 24dB low-pass filter is sonically pleasing and though the general tone is kind of Moog-esque with a nice mid range growl and sizzling top, the resonance is voiced very differently to a Moog and the low end is less deep as a result and more like an MS20 - no bad thing!

Also, the filter resonance only seems to affect the last quarter of the emphasis dial's travel but this will be updated in the next production run. It does sound musical, though, and is great for making bleeps and drum sounds such as kicks and hats.

The two envelopes are very snappy (now improved ADSR instead of the old ADS) and can also be assigned to different destinations. You could have one assigned to PWM and the other to the filter or one assigned to filter and one to the amp and more besides. Both can have the start of their cycles reset by MIDI or the sequencer.

Finally, the VCA can be controlled by either envelope, by a gate (which gives organ-like attack and decay) or when set to 'thru' mode, the VCA will drone. This is a very flexible arrangement and is easy to get to grips with. Note that MIDI implementation is very basic on the Leipzig-So don't expect deep daw integration or controller abilities.

To sum up, the Leipzig-S builds on what was already a great sounding and pretty versatile synth and could happily be your go-to mono synth for bass or leads, percussion sounds and effects, or a great box for rookie synthesists wanting ease of use with a top notch sound.

It doesn't have extensive MIDI parameter control or CV connections but it has its own character, is well built, portable and flexible and even with just a saw and square wave covers a lot of sonic territory when you add in the many cross-modulation options and sequencer for evolving sounds, filtered sequences and rhythmic patterns.

For under £800 we reckon it's a good investment and it seems others do too - the first production run has already sold out and there's a queue building for the next.