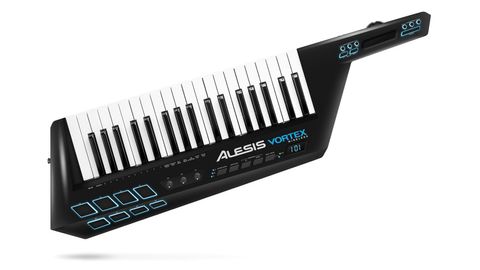 Thanks to wireless functionality, the Vortex now feels like the product it always should have been. Stand up, strap on and rock out!

The keytar's renaissance is a curious phenomenon. It can't just be a potential user base of hipster ironists that inspired Roland then Korg to create strap-on synths for the 21st century - clearly, there are plenty of people out there who sincerely love playing these things. Alesis must have come to this conclusion prior to 2012, when it launched the original Vortex, a keytar-shaped MIDI controller.

The only problem was that, although this was a device designed for the kind of exhibitionist who likes to prance around on stage with a keyboard strapped to their chest, it still required a USB cable (albeit a long one).

A Wireless version, then, makes a great deal of sense. Rocking pretty much the same specs as the original Vortex - though it comes in black rather than white - the key difference is that, once you've installed the four (included) AA batteries and plugged the (class-compliant) USB receiver dongle into your computer, you can play this thing with total freedom. And the setup process really is as simple as that: it's almost laughably easy to get up and running, in the most literal sense.

We didn't notice any difference in latency between playing it wireless and wired (the USB port is still in place), nor were there any dropouts. Alesis reckon on a range of around 200 feet, though we found it to be significantly less than this when we started going round corners and putting walls in the way. You should be able to run wirelessly for about four to six hours before you have to change batteries, though USB powering is still an option, and there also DC input, 5-pin MIDI Out and sustain pedal sockets.

Strap on the Vortex Wireless and it feels pretty good. The body may be plastic - so be wary of getting too acrobatic or you might just end up with a broken keytar hanging pitifully from your shoulder - but it feels pretty well put together.

The 37 synth-style, velocity-sensitive keys are great for soloing and benefit from aftertouch capability, while the neck-mounted ribbon controller and pitchbend wheel fall nicely under the left hand. The three knobs and eight pads feel less accessible, but they're solid and smooth nonetheless.

One notable highlight is the built-in accelerometer, which allows you to send MIDI data by tilting the Vortex. Using this, your posturing movements can have real musical meaning - it gives you a great extra level of expression.

Like many of the controls, the accelerometer is very configurable - you can calibrate the minimum and maximum positions - though there's a lot of button/key pressing involved in setting it up.

But much of this effort can be alleviated by using the Vyzex Vortex editing software, which enables you to edit any of the 23 stored patches from your computer (dedicated patches for the supplied Ableton Live Lite DAW and Sonivox Vortex I plugin synth are preloaded into the Vortex).

It probably goes without saying that the Vortex Wireless isn't going to be for everyone, but if keytar-style MIDI control is what you're after, Alesis' offering pretty much nails it. It's eminently playable and gives you all the freedom you need to look as ridiculous as you like.