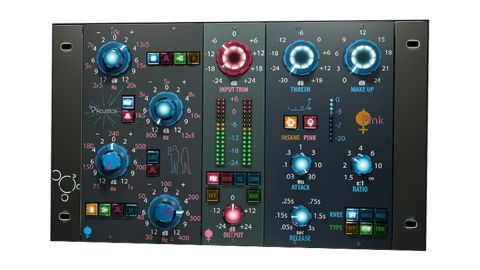 If you've got the machine to handle it, Pink will blow you away with its stunning analogue emulation and gorgeous tone.

It made its name with Nebula, the effects chameleon that loads 'sampled' models of hardware, but of late it has been putting its resources into the Acqua series of dedicated plugins, each one emulating a specific unit.

The big question is, which pieces of hardware were sampled in the process of creating Pink?

Acustica tells us it's based on modified kit and has no direct real-world counterpart. Presumably, though, some of the 'inspiration' was derived from the API 550A and 550B EQs, since Pink's four EQ bands in A mode and B mode closely resemble the three bands of those particular models, albeit with the mid band conveniently doubled up, and increased gain resolution (increments of 1dB, as opposed to the 2dB steps of the hardware).

Compared to most other plugin EQs, Pink is truly in another league.

Each band has the ability to boost its frequency range with a powerful, transparent quality that will sound instantly familiar to anyone who was buying albums before the turn of the century.

Granted, countless other EQs claim to be able to do the same, but Acustica's hardware sampling process has evidently resulted in palpable added depth and realism.

Acustica really has outdone itself with the compression effect, too. While perhaps similar to the API 2500, Pink's compressor certainly isn't an exact clone. Its Ratio control ranges from 1.5:1 to Inf:1, while the Attack time travels from 0.3ms to 30ms and the release time covers 0.05s to 3s.

It also features a switchable soft/medium/hard knee, and the choice of feed forward and feedback detector styles (the former more aggressive, the latter smoother).

One complaint levelled at Acustica's previous emulations was that while they do a good job of capturing the tonality of analogue compressors, the gain reduction action isn't well replicated. Pink ushers in a new generation of Acustica's 'Core' technology - Core8 - that's designed to improve the accuracy of compression, among other things. The result is its most punchy, compressor yet, capable of pumping and swinging in a way that can really enhance the groove and add movement to any recording.

In summary, Pink's groundbreaking channel strip emulation is a stunner. As long as you have a machine of high enough spec to cope with its demands, and the patience to put up with its slightly laggy interface, you'll find it an indispensable tool for achieving world-class compression, EQ and analogue tone.