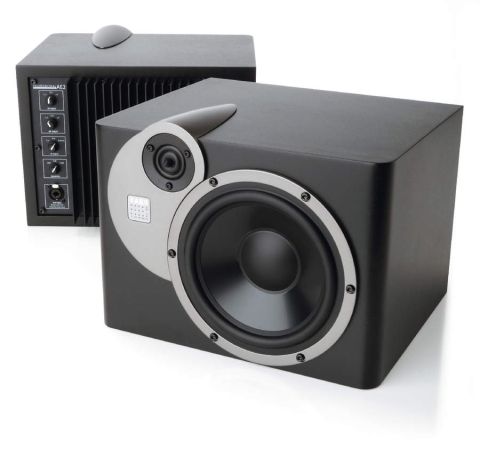 A top-quality professional monitoring system: accurate, detailed and easy to listen to.

Acoustic Energy was founded in 1987 in West London, and soon gave birth to the AE1, a professional nearﬁeld studio monitor designed with performance and longevity in mind.

The brand, now known as AE Pro are passing the torch onto another studio monitor, the AE22, which is available in both passive and active configurations.

Out of the box

Everybody has a love-hate relationship with Yamaha NS10s. They might be difficult to work with for long periods, but their mixes sound great elsewhere, so we love them.

The people at AE looked at the properties that made the NS10s so popular in the studio, and designed the AE22 with these same attributes in mind.

So what we have here is a closed-cabinet non-reﬂex speaker, with a low distortion and crossover frequency of 2KHz.

Rather interestingly, the resulting off-axis consistency is good, while the time-domain performance is very impressive.

The AE22s measure almost double the size and more than double the weight (15kg each powered speaker) of the NS10s.

The front-panel of the sturdy cabinet features rounded edges on two sides and hosts a 200mm LF driver and a contoured, metal plate incorporating both the HF driver assembly and the AE logo.

A matrix of LEDs discretely displays the status of each of the controls available on the rear-panel as well as any clipping occurring on both LF and HF power ampliﬁers.

The rear-panel is mostly occupied by a large, central heatsink, with audio inputs and controls on the left and IEC mains and power switch on the right.

Both balanced and unbalanced connections are available on a single Neutrik combo XLR/jack socket, above which are mounted four three-way rotary switches.

The sensitivity switch toggles between -3dB, 0dB and +3dB operation. The 100-watt LF and the 60-watt HF power ampliﬁers will max out with a 900mV 400Hz sinewave on the 0dB setting.

Trading in our NS10s for the AE22s on the meterbridge, we decided to also include our trusty KRK V6s alongside them.

We ended up running the AE22s quite loud from the off and not only did they handle it well, they also provided accurate, tight low-end information you don't get from KRKs or NS10s.

When we mix with the Yamahas we'd touch the cones to feel what the bottom-end was like and add the tactile information to what we were actually hearing.

The AE22s do that for you: the bottom-end isn't extended but it's so tight that that we found it really informative.

Top-end is clean, not overly crispy and just as useful as the low-end.

But where the AE22s really shine is in the midrange. It's solid, crystal clear, not tiring at all, but equally obvious when it comes to balancing vocals on a track.

These are remarkable speakers. They're not designed to impress, but rather to assess the sound and give the engineer a clear picture of what needs to be done. As a result they come highly-recommended.