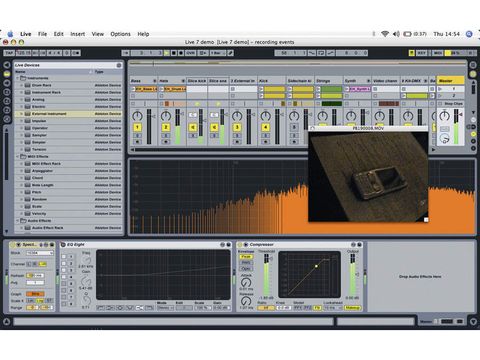 Held back from top marks simply because it misses a few important tricks. However, Live remains a uniquely creative DAW.

Let's get one thing out of the way: Live is one of our favourite programs.

We've loved it since it came to market, have championed each new version and watched it grow from a promising and original niche product into a cutting-edge powerhouse. And, until now, each update has been exceptional.

In this review, we're looking at the all-encompassing Ableton Suite, which contains Live 7 and a whole range of add-ons and soundbanks (except for the new SONiVOX Orchestral ones), but as for the all-important core app, almost nothing has changed visually - Ableton clearly think they have the interface sussed now, as it's damn near identical to 6. But what about under the bonnet?

The first major improvement we come across in Live 7 is the long-overdue inclusion of true sidechaining, which is vital to modern production.

In Compressor, it's added right at the start of the chain (ie, pre-EQ), can be taken from any channel (pre- or posteffects), gain can be applied and you can even mix the balance of the sidechain source and the material to be compressed, which is a really nice innovation. It's all fantastic to work with.

Over to the Gate and Auto-Filter and it's a similar story, with tight, useable sidechain control of both. It's also pleasing to see that the aforementioned Compressor - which was previously one of Live's weakest plug-ins - has now got brass balls.

There's a knee control, a range of modes based on vintage hardware (which respond in a range of useful and substantial ways), and a nicer display to help show what's actually going on. Top marks there, then.

The next really big addition is Drum Racks. Initially, we thought these were cool but nothing really groundbreaking; however, the more we use them the more we love them. The basic idea is of a drum machine with a matrix-style interface, but it's so much more than that.

Each drum cell gets its own channel in the Drum Rack mixer (which can be hidden or displayed in the Session view mixer at the push of a button) and can host any instrument and effects chain you like, so the Drum Rack becomes an entire custom-made bus group.

Closely linked to Drum Racks is another new and stonkingly good feature - REX support. Sure, this was probably overdue, but it's here now, and works really well. You simply drop in a REX file like any other audio file, and it picks up the chop points and displays them.

We did occasionally hear the odd tiny click at the slice points, but fortunately that doesn't matter too much, thanks to an even cooler related addition: slicing.

Slicing does exactly what it says on the tin. With REX files, it slices the audio up (according to REX slice-points or Warp Markers and beat divisions), places it in a series of Simplers in a Drum Rack-style interface and creates a MIDI file.

You then have the same control over each slice as if it were a self-contained sample. Of course, this is all non-destructive.

Now, one feature that was handy in Live 6 but extremely rudimentary was video support. Sure, you could sequence the video and even warp it, should you desire, but there was no way to export the fruits of your labours.

Well, exporting is now catered for, and, basic though it may be, you can still warp the video first. Even so, we'd like to see, at the very least, some kind of video cross-fading tool, and with the proliferation of VJs out there these days - not to mention the cool effects you can get from warping video to fit your audio - we don't think that it would be an innovation too far.

As for those export options, there are so many that at a push you could use Live as a video format conversion tool, albeit a rather unwieldy one!

The audio engine has been spruced up too. Whereas Live mixdowns previously lacked some of the professional sheen and character of competing applications, the software now uses 64-bit summing wherever signals are mixed, and there is indeed a marked difference in audio quality.

While we're on that subject, the Hi-Q sample-rate conversion has been improved so that it now lives up to its promise when pushing sampled audio well beyond its original parameters.

There's also a dithering option for all audio rendered below 32-bit, with a number of algorithms on offer, including the popular POW-r.

Finally, Hi-Quality modes are now available to Operator, Dynamic Tube and Saturator, to cut down on digital artifacts and make Live sound a little smoother and more 'analogue'.

Moving on, and Live 7 should go down in history as the time that Ableton almost listened to the requests of their users, as a whole raft of features we've been asking for have been added. First of these is the ability to change time signatures both mid-project and on the fly.

So, for example, you can link different scenes in the Session view, enabling bands to have whole sets loaded into one Live set, rather than them having to load up a new project for each song. From a live performance perspective, this is a considerable leap.

And speaking of live performance, DJs will finally be able to mix Live with 'real' decks with confidence thanks to the new tempo nudge buttons.

Not only that, but MIDI control over tempo has been enhanced, enabling the use of two controllers: one for coarse control, the other for setting the decimal portion of the tempo.

The glorious new automation track lanes will be a breath of fresh air for anybody who's ever mixed a compilation album in Live, as they enable you to keep track of multiple critical parameters simultaneously; however, once you add an automation lane, you can't alter what the previous one is displaying (though you can alter the automation), which proves a little restrictive.

Best of the rest

We haven't got space to go into all of Live's new features here, but some of the remaining highlights include easy hardware integration, allowing external instruments and effects to appear in the mixer rack as if they were plug-ins, improved MIDI timing for incoming data (and it's noticeably better too!) and even a tasty spectrum analyser with loads of useful options.

At the end of the day, this is probably the hardest Live review we've ever had to write. Despite a few persistent niggles and omissions, each version has brought genuine and material improvements to your workflow, to the point where you simply couldn't go back to using the previous one.

But we didn't get quite that same sense of progress when we first launched version 7. There's nothing groundbreaking - just stuff to allow it to catch up to the competition. And there are still gaps...

For example, with so much modern music production being based around groove quantisation, and software such as Reason pushing the boundaries of both quantisation and groove-mapping, Live is beginning to get left behind in this respect.

In version 7, we would have liked not just the ability to learn MIDI quantisation maps, but to apply them to warped audio too. And how about the ability to play tracks with tempo changes in the Session view? Oh, and there's still no scissors tool...

Then there's the question of value for money. There are three ways to buy Live 7, and we're looking at the full-on Suite here, but the standard Live 7 boxed version is still available, as is the download, which is the same but a bit cheaper and minus the Essential Instrument Collection 2.

If you already have all the plug-ins and soundbanks you need, these 'basic' options may be welcome. You could, of course, go the 'separates' route, bolting on all the Ableton add-ons to your setup, but this gets very pricey indeed if you buy more than a few.

Alternatively, you can opt for the boxed Ableton Suite that we're reviewing here, which includes all their instruments, both old and new, and plenty of sound libraries.

This option is the best deal by far, and would seem even better but for some aggressive pricing from Apple, as with the release of Logic Studio they've knocked the wind out of pretty much every major competitor when it comes to sheer bang for your buck.

Consequently, Live is now actually considerably more expensive than Logic Studio if you opt for the Suite - even the standard Live 7 package is about £50 more. And it still doesn't offer the same level of depth and versatility.

That aside, the saving grace of Live is that it remains utterly unique. So, should you upgrade? Well, ultimately, yes.

It is improved, it is worth having, and once you get used to it, it's hard to go back to 6. But it still feels more like Live 6.5.

If you don't own Live at all, though, there are at least 15 good new reasons why you're missing out and need to buy it right away, and that's on top of the fact that it was an essential purchase already.