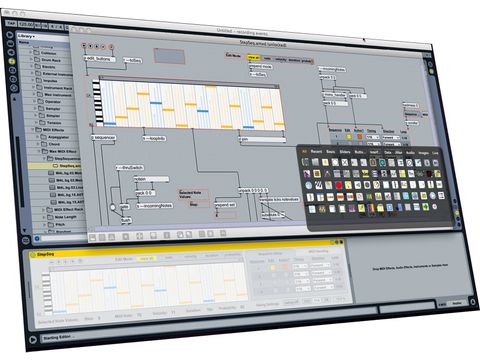 The ultimate way to add features and expansion to Ableton Live... Once you figure it all out.

January 2009 - Ableton and Cycling '74 announce Max for Live. Ableton is the Berlin-based company behind Live, probably the most popular performance software known to man (which also conveniently rocks for recording, production, DJing and remixing), and San Francisco's Cycling '74 produces the Max/MSP/Jitter tools which enable users to create their own instruments and audio/MIDI effects.

Max for Live is intended to give Live and Max users a bridge between their worlds, bringing timeline-based workflow to Max users, and giving Live users custom-built devices, expanded interface access, and new levels of hardware control.

The installation reflects the fact that you're dealing with two separate companies - you have to purchase Live 8.1 (a free upgrade if you're already using 8) and MfL from Ableton, download Live 8.1 from Ableton, then download Max from Cycling '74, then authorise it back in Live (the new content isn't visible in the Browser until you do that). There are various crossgrades available, so if you're already using Live, or Max, or some combination of both, you'll find a price that suits your current situation.

MfL doesn't work standalone - it can only be used to build devices for Live, unless you have a license for an existing version of Max. At the moment, there's no cheap/free 'runtime' playback-only version that'll let you use MfL devices without buying the full version.

If you judge MfL by appearances, you'll be rather underwhelmed - on a day-to-day level it's invisible, apart from the 'Max...' folders in the Device Browser. The content in those folders is sweet, though. There are three core devices: Loop Shifter; Step Sequence; and Buffer Shuffler, and 40 instruments and effects based on Cycling '74s famous Pluggo suite. There are also folders for Tools and, inside these, Building Blocks, which function as basic devices in their own right, or can be cannibalised for use in more ambitious projects.

"If you judge MfL by appearances, you'll be rather underwhelmed - on a day-to-day level it's invisible, apart from the 'Max...' folders in the Device Browser."

We had to root around to locate all of the Max for Live content as it's spread throughout the Live Library, like when you install a Live Pack. It's the same story with the help/tutorial material; there's the Lessons and Sets folders in the Library, the Lessons in the Help View, the Live manual, the lengthy text annotations in the Max for Live editor (the Patcher), and the Max 5 documentation.

Spreading the material across so many windows in two different products (not to mention the websites) doesn't help if you want a quick answer to a particular question - it's usually faster to hunt for answers on Google than it is to search the documentation, all of which underlines MfL's 'scientist' credentials.

The installed devices and presets are identified as Max for Live content in the Browser, and they have a new Edit button, but otherwise act like regular Live devices. You load them, MIDI map them, fiddle with the controls, and save them in racks and projects.

Highlights for us are the Step Sequencer (not much different than working with regular MIDI clips but we like the self-contained vibe of it), the Video Theremin (which is buried in the Lessons somewhere), and Max Simple Echo, a neat MIDI delay.

Some of the other tools have greater long-term potential, though. The Clip Operations lesson contains a device which can launch Session View clips, and the CS Step Sequencer (also buried in the Lessons) gives instant gratification for APC40 or Launchpad users who want to branch out with controllers.

If you don't use an Ableton-endorsed controller, don't stress, because it's possible to make MfL work with almost any hardware. There's a lesson based around the Apple Remote, the Video Theremin just needs a blue object like a pen, and owners of more complex devices like the monome, the Lemur, and the Snyderphonics Manta are going to feel right at home. Vlad Spears, who developed the Honeycomb Max patch for the Manta, is currently adapting it to run within MfL with lots more to follow.

Click the Edit button, and you're inside a device. Be careful, though, as defaults can be overwritten by mistake (we expect to be doing this a lot) so use the 'Save As...' command before you start tweaking, and be aware that when you save an edited MfL device, every instance of it within your set is updated, not just the one you're looking at.

When you're editing, leave Preview Mode on so you can hear all of your changes in real time (of course, for some geniuses/ lunatics that's an invitation to build and edit devices during live shows).

The Library content gives a good idea of what can be done with MfL - MIDI instruments, MIDI effects, audio effects, hardware controller interaction, video functionality, and so on - but for many Live users the most exciting feature is the access to the Live API (Application Programming Interface). Using this feels like you're actually modifying the Live application itself, instead of simply adding-on instruments or effects.

"The Library content gives a good idea of what can be done with MfL, but for many Live users the most exciting feature is the access to the Live API."

MfL devices can be used to observe the status of Live objects, such as tracks and clips, control the launching and playback characteristics of clips and scenes, and target mixer functions like volume, pan, and sends. This will be really cool one day, but we kept wishing there were more examples in the Library content. It's pretty frustrating, because you read about what can be done, but you can't do it immediately.

At the extreme end, MfL can bring all kinds of crazy stuff into your Live sets: OSC for one (not that crazy, we admit) - but that's nothing. Nick Rothwell has built an email-reading device and a Twitter client so now you really can check your email during your live sets. On the visual side, the tools are there to insert images and movies, but including specific Jitter performance (Jitter is the main Max video tool) depends on which Max license you have.

If it takes off, MfL will spawn an online user community of shared content, and we're sure there'll be extra 'official' content in the form of paid-for or free Live Packs. So if you're a busy pro who doesn't have time to build his/ her own devices, you'll always find somebody who will build MfL devices in exchange for cash/favours.

Max for Live might not be for you if you don't like to read manuals, you're only interested in straightforward clip-launching, you're a songwriter/ composer, a typical DJ (no offence) or a professional on a deadline, though there's no reason why you shouldn't experiment with what it can do. After all, there's never before been software that allowed us to tear into a DAW and poke around on the inside, so in a way, we're all beginners.

However, anybody who spends their time looking for a new sound, or cunning ways to optimise their performance routines will really thrive with MfL at their side. This isn't the kind of product that emerges fully formed - it'll depend on Ableton, Cycling '74, and the users to develop it further, so it wouldn't be fair to bash MfL on its initial content - although we did expect more ready-made examples. OK, so it's very clever and involved but those tutorials and help files do need reorganising, and it's crazy that the CS Sequencer, which will be one of the most searched-for items, isn't in the Library, but instead is contained within one of the lessons.

Ultimately, though, Max for Live is worth the money, even if you just want to get the included content and grab whatever other people come up with. We're sure there are a lot of NI Reaktor users who never build their own Ensembles, but have a ball using those shared online.