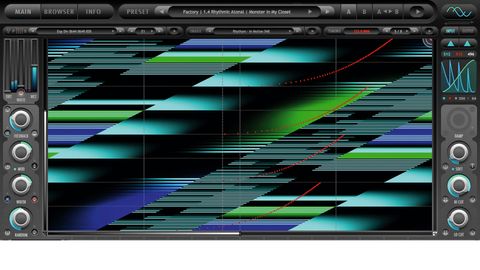 A unique and powerful technical triumph that deserves attention from sound designers and adventurous musicians, despite its highly particular sound.

In the last few years, most new instruments and signal processors tend to offer ever more intricate variations on existing hardware devices. Have we reached a point where there are no more new sounds to be had? Clearly, 2CAudio thinks not.

Kaleidoscope is an AU/VST/AAX plugin effect based on a huge bank of parallel physically modelled resonators (a type of filter), modelling the way either strings or springs resonate, and applied independently to the left and right channels.

Both model types act like filters, accentuating certain frequencies and attenuating others, causing resonant frequencies to ring over a period of decay time.

None of this is revolutionary, but the way in which it's all controlled - and the number of resonators involved at any one time (up to 512) - certainly is.

Kaleidoscope uses images to control the various types of modulation. These images (the supplied ones are pixelated abstract patterns, rather than 'pictures' in the conventional sense, though any image can be used) can be non-destructively manipulated using various front panel controls - including changing their position and rotation - and by applying specific range values to their operation, all of which affects their modulating effect on the resonators. The resonator setup then works on the input signal in a tempo- synced loop from left to right.

To visualise this, imagine pressing a key on a piano. The hammer hits the string, and while this force has no tuning, panning or complex envelope of its own, the physical properties of the strings, the cabinet and the surrounding room create musical tones with harmonics that resonate and decay in ways that have no obvious relationship to the initial strike.

Kaleidoscope operates like all of the components of a piano (or any musical instrument), but with the ability to customise those components to a great extent.

So, what does this all amount to sonically? Kaleidoscope offers two functional 'modes': signal processing and sound generation (albeit based on an input signal).

The resonators can be made to act like an additive synth, creating entirely new tones from existing ones by adding harmonics (partials). There's also a white noise generator that can be added to the input to dramatically alter the results, or even used as the sole input source.

The plugin then dynamically adjusts properties such as tuning, level, harmonics, frequency attenuation and stereo image, as governed by the input signal, tuning map (controlling the tuning of the harmonics and resonated frequencies) and resonator setup, generating everything from musical parts (shifting stereo pads, gated basslines, etc), through other-worldly atonal bleeps and rhythmic crackles, to more conventional effects like morphing delays and chorusing-style noises.

Going even further than that, by using two image maps (one for input and one for output), separate control of these properties can be taken at the input and output stages, the latter giving control of the decay time of the resonances resulting from the input image map (as does the Feedback control).

There's also an extensive range of scales (the aforementioned tuning map) available to keep the results in key with your project... or not!

A million shades of grey

There's certainly no denying that Kaleidoscope is an innovative technological triumph. Its main problem, however, is that no matter what you use it for, the overall sonic flavour remains the same.

Though an 'effect', Kaleidoscope is, in operation, more like a keyboard player and his synth than, say, a chorus or delay - a keyboard player with a very distinct style, who only ever uses a couple of patches.

In practice, this means that, much like the patterns generated by the toy that the plugin takes its name from, the results may be infinite in their variation (and theoretically infinite in their output), but they're all still... well, kaleidoscopic!

If you're involved in sound design of any description, Kaleidoscope is a wet dream. 2CAudio's boast that it may come to define the sound of the 21st century is a little over-ambitious, but it certainly unlocks endless new and rhythmic iterations of existing sounds and can only help you stand apart from the pack.

Musical experimentalists and ambient artists, too, will love what they hear, as it's something you simply won't find elsewhere.

For the majority of electronic musicians, however, while producers of techno, minimal, deep house and liquid DnB might fall in love with Kaleidoscope at first sight, it could well turn out to be a whirlwind romance that quickly grows stale.

And for everyone else, alas, the (eminently justifiable) price tag and overall homogeneity of the results place Kaleidoscope squarely in the 'futuristic indulgence' category.