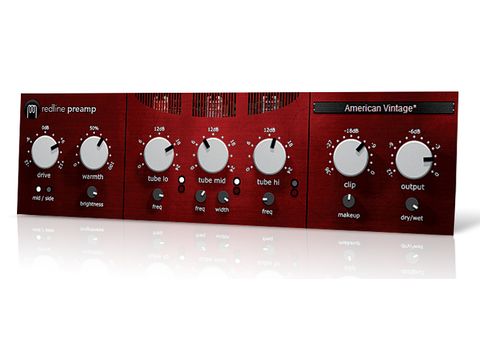 If you're already creating good mixes, try Redline Preamp - it could be just what's needed to edge them towards greatness.

Thus far, 112dB's Redline series has impressed us greatly, with Redline Reverb and Redline Equalizer both scooping five star ratings. Up next is Redline Preamp, an analogue preamp emulation that imparts "warmth, character and overall mojo" to signals.

To understand where 112dB is coming from with this plug-in, it's necessary to grasp what a preamp is and the effect it has on a sound. A preamp is an analogue device that converts a low-level electrical signal into one that's of a sufficient level to drive the equipment following it (eg, a recording device, a mixing console, amp and speakers, etc).

Preamps are largely intended to deliver a clean reproduction of the input signal - however, with analogue gear, it's inevitable that a very small amount of signal 'colouration' (typically harmonic distortion) will take place, and this becomes especially apparent when the unit is driven hard.

The character of this saturation is what endears experienced engineers to 'name' preamps such as API, Neve and SSL. Likewise, many analogue mixing desks have preamps built in, and the console channels themselves can lend similar colouring.

Redline Preamp isn't based on a particular piece of real-world equipment, so it gives you controls with which to define its character. The topology is as follows: the input signal is split into three frequency bands, then tube-style saturation is applied to each. These three are mixed and sent through an optional clipper, and the resulting signal is mixed with the dry input.

There are controls to set the overall drive amount and "warmth" (even or odd harmonics, or a combination of both), and the centre section sets the drive per band. The clipping threshold can be adjusted and any loss of level compensated for with the Makeup knob. There's optional mid or side operation, too.

Our initial impression was of being underwhelmed - it was hard to tell if Redline Preamp was working at all on many sources. The penny dropped, though, when reminding ourselves of what it emulates: preamps are not supposed to radically alter the sound. Closer listening revealed that there is indeed something subtle going on.

Many engineers will attest that differences between preamps become apparent when they're used on every track in a project, so we plonked an instance of Redline Preamp on every track in a busy mix, to simulate running the tracks through an analogue summing device or console… and Bingo!

"We plonked an instance of Redline Preamp on every track in a busy mix, to simulate running the tracks through an analogue summing device or console… and Bingo!"

Whereas the elements of the mix had previously been jostling for sonic space, the tube sim's gentle taming of errant dynamics enabled each to sit in its rightful place, giving greater cohesion. It sounded like the same mix, but smoother, easier to listen to and more 'pro'.

We also used Redline Preamp to accentuate the relevant ranges of instruments. For instance, driving the low band of a bass sound can make it more consistent across different notes. The treble band does a fine job of highlighting the 'breath' of sound sources (and we don't mean just vocals). And it's ideal for use with edgy guitar sounds: more of the harsh treble can be cut with EQ, then air, sparkle and presence 'restored' with Redline Preamp.

The mid band gives the most obvious effects, particularly on the resonance of a snare drum. And it was with percussive sounds that we most appreciated the Warmth knob: turned up, it fills out the body, while low values emphasise transient snap. Oh, and you can create obvious distortion, too, by cranking the drive dials and boosting the input with a gain plug-in.

We'd place Redline Preamp low down on the list of 'must haves' for aspiring producers - we'd recommend investing in quality compression, EQ, reverb, etc, plus a good monitoring setup. More experienced engineers, however, may find that Redline Preamp is just what they need to kick their mixes up a notch or two.

Hear what Redline Preamp can do to bass and guitar: