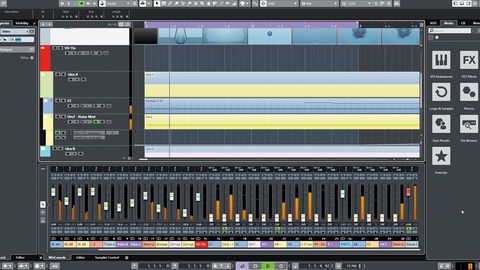 Nuendo offers lots of power to those working with picture, game audio and VR, all the while keeping Cubase users happy

Steinberg's DAW has been around for 30 years, with initial versions supporting only MIDI. Audio recording, editing and playback, as well as plugins and virtual instruments did not arrive until some time later.

It’s therefore interesting to note that its partner product Nuendo has been around for 20 years, and in many respects has set the groundwork for Cubase as we know it today. Aimed originally at the post-production audio market (and with some of the music creation features of Cubase as an optional add-on), it’s now firmly placed as a high-end, higher-priced, superset of it, and one that has embraced a range of video and game audio features that wouldn’t necessarily be required for the average ‘music-only’ user out there.

Intriguingly, Nuendo 10 follows on from Nuendo 8, making the relationship between Cubase and Nuendo versions somewhat confusing – there are features that remain Nuendo-only, while others will be tested in one DAW before making it to the other.

You can check out a review of the new Cubase 10.5 and that will concentrate on those key new features that make a Nuendo uniquely what it is.

Immersive audio capabilities have also been expanded to include support for dearVR Spatial Connect, which allows you to control Nuendo features within a VR development space. In coming years this will, I suspect, find a place for itself in mainstream music creation. For now it is an important tool for the creation of interactive and immersive audio.

Cubase 10.5 review
Steinberg’s leading DAW is now in its 30th year – is it worth the update?

There is now a field recorder audio input feature that allows you to match alternative recorded audio with events already in the project. This is specifically designed to make the process easier on larger film or TV projects.

An interesting new feature that will appeal to both audio mixers and composers is Video Cut Detection, where the program can automatically insert markers at the beginning of different video events automatically. Thankfully, version 10.2 also brings video rendering with embedded audio up-to-date, supporting MP4 and H.264. However, this remains an area that would certainly benefit from greater flexibility and support for a wider range of formats.

Alongside these changes and the new Doppler, Voice Designer and Distroyer plugins, are many that have already seen the light of day in Cubase 10. MixConsole Snapshots, ARA support and Audio Alignment (though still in need of some improvement to make it work well with a wide range of material) are all important additions – and there are many smaller tweaks throughout.

Overall this is a solid update, and one which solidifies its place as a serious player when working with video, games and immersive binaural or multi-channel audio.

However, even at its higher price point, it may prove to be enough of a draw for existing Cubase users who find themselves requiring some additional functionality.

MusicRadar verdict: Nuendo offers lots of power to those working with picture, game audio and VR, all the while keeping Cubase users happy.

"Nuendo has taken on more and more of Cubase’s functionality, while extending this with its own more advanced and sophisticated toolset for post, game audio and VR."