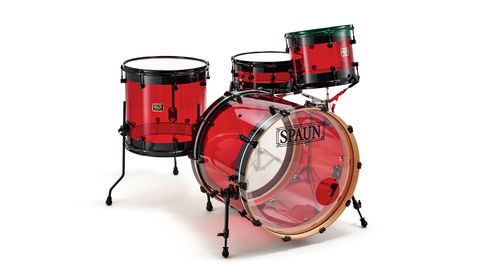 As well as being visually exciting, the combination of maple and acrylic produces a sound that straddles the warmth and tonal richness of maple and the power and focus of acrylic.

Over in LaVerne, eastern Los Angeles, Brian Spaun has been custom building eye-catching drums for one-score and two years now.

When you log on to Brian’s site you are overwhelmed by the sheer quantity and variety of kits and snares that he has knocked up over the years. The inventory is staggering. And it’s the most colourful of sites.

Yes, it’s the shiny happy Californian way, but kudos to the man for the utter back-breaking volume of his work. And bear in mind also that kits and snares are made to order. You specify what you want, put in your request, and 12 weeks later your new gear is ready to ship.

Spaun broke on to the scene in 1996, lauded for its extra-thin 8-ply maple shells with sharp and symmetrical, equal 45° ‘steeple’ bearing edges. Since then the company has had success with acrylic shells and the addition of more exotic woods to the inventory.

This month we have a hybrid kit that combines shells of maple and acrylic plastic. The review kit is (by my measurements) 22"x19", 16"x16", 12"x10" with a matching 14"x5½" snare. There was a bit of a surprise waiting when on removing a head from the bass drum shell the maple edge ring came away from the acrylic centre (on which the lugs are mounted).

The acrylic and maple sections of the shell are not glued together, which given a moment’s thought makes perfect sense.

“In fact, you can separate each shell into its three different sections when you remove the heads. I prefer this over a glued shell because wood and acrylic will expand and contract in different amounts, which can stress the very small glued joints that you are counting on to keep your drum intact. Also, glue can dry out, loosen, and fail over time.”

Brian adds, “Have I ever experienced one of my glued hybrid shells fail? No, not so far. Have I ever seen other acrylic drums that relied on glue to stay together fail? Yes I have. I have built glued hybrid shells that are at least five to seven years old that are holding up fine. I’m just not sure what they will be like 25 years from now. They may be fine, but I prefer the mechanical fit simply because I know for a fact that it cannot fail over time.”

The way this ‘mechanical’ join works is via ‘L’ channels routed into the edge of the maple and the acrylic sections in male/female fashion so that the one slots into the other. Since both the wood and plastic are the same diameter and thickness (¼"), the joint should mate smoothly.

In practice, because (as Brian infers above) the wood is organic and the plastic thin, it is inevitable that the two materials will warp minutely and thus drift slightly. So when the drums arrived there were areas of the outer shell where the plastic and the wood were seamlessly flat and areas where the acrylic or wood had bulged so there was a very slight but visible (under 1mm) ridge.

Once assembled and tensioned this is not a problem (and you only notice on close inspection). There is absolutely no danger of slipping apart, but this is the price to pay for marrying two quite different materials without a permanent bond. The maple is 8-ply, 1/3" (6mm) and covered in Black Sparkle wrap, while the 1/3" thick acrylic is deep red.

The bass drum hoops are a thicker 12-ply, 3/8" (9mm) maple. Since these are custom drums you can request any, virtually unlimited, choice of finish for the maple and choose from 13 acrylic colours.

Spaun’s acrylic is cast in the USA and the shells have a glued seam which is strengthened by a separate thin strip of acrylic, glued over the length of the seam, rather like Ludwig’s reissued Vistalites.

Other Spaun characteristics include the solid brass, small imprint, single-point mount SBR (Solid Brass Resonator) lugs. They have a two-part design with the rounded body turned from solid brass (no cavities) while the separate insert ‘floats’ so that it aligns easily and won’t cross-thread with your tension bolts.

The bolts turn smoothly and easily on the lugs - always a good sign - so the drums always tune easily. Care is taken everywhere. The bass drum maple edges are 45° but slightly smoothed over, so not terribly sharp. And the bass drum’s maple hoops have a smooth low oval outer edge, so they do not slice your fingers like on some hastily finished drums.

So what’s the hybrid idea? Is it merely a visual gimmick, constructing a hybrid shell just because it’s possible? We’re sure there is an element of that, but then again, hybrid shells are popular these days, and just as a sonic experiment it has to be worth investigating.

Spaun attests that, “It’s a way to create a new drum sound that has sonic qualities of both acrylic and maple.” The fascinating thing is that, as a custom builder, Spaun can vary the ratio of wood to acrylic and also vary which material forms the bearing edges. Thus here the main part of the inner shell is acrylic and the edges are maple ply. But it could be reversed.

Spaun informs us that maple edges make the sound a bit warmer than acrylic edges; that maple is generally a bit warmer toned and more resonant than acrylic, which is more focused, louder and attack-ier. So turning to the actual kit on review, the 19"-deep bass drum shell consists of two 3" wide, 8-ply maple outer rings with a 13" deep inner acrylic section (the 16" floor tom has an 11" acrylic middle).

So there is more acrylic than maple and the lugs are mounted on the edge of the acrylic, while the maple is undrilled but takes the bearing edges. The bass drum sound is immediately impressive. There’s a 5" offset porthole in the clear front logo head, while the batter is an Evans EMAD with external foam perimeter ring.

Otherwise the drum is undamped and you can really hear the effect of that hybrid shell. There’s a Star Wars-like cinematic ‘Pow!’, an explosion blasting right from the batter through to the resonant head, expanding out to the sides and then going still pretty quickly. Imagine a slow-motion image of the sound waves opening out like a nuclear mushroom, rising and pluming, then dying with a soft, warm yet ominous majesty.

A bit dramatic maybe, but that’s what comes to mind - a sharp explosion followed by a focused, almost gated closure.  This effect is echoed by the two toms. Most modern floor toms have adopted the 16"x14" dimension, the depth reduced to tighten the beat and lessen the rumble.

But this is a good old-fashioned 16"x16" and there’s a difference. It’s just that bit more deep and boomy. There’s a full body that complements the bass drum well, so you can play between the bass drum and floor tom and cheat a double-kick effect.

The 12"x10" also has that extra depth, this time a bit 1980s, so that at middle tuning there’s a lower, fatter tone than a modern shallower tom. This again sits with the other pair so that the trio has an expansive, quite dark but nevertheless focused classic rock power. That central broad band of acrylic does seem to hold in the kit’s sound and harness it for a concentrated but potent whole.

Against this the 14"x5½" snare drum might be thought too shallow for the kit (you can anyway order up whatever size you fancy), but we like the contrast between the deep tones of the kit and the piercing strike of the snare, doing what a rocking snare should do. It doesn’t lack for volume and can be tuned down a little so that it fattens up and slaps.

The quality of those sharply defined 45° edges and carefully cut smooth and shallow snare beds all add up to complete a satisfying set of drums.