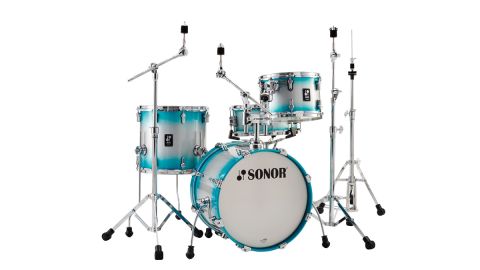 Smaller kits make increasing sense in our modern cramped world and Sonor’s AQ2 is one of the best with its lacquered maple shells and wide range of bass drum options.

Sonor has re-vamped all its drum series so they now fall into easy-to-follow brackets.

Thus the SQ1 and SQ2 drum kits are the flagship lines, while the AQ1 (entry-level) and AQ2 (intermediate level, as seen here) are the gateway products. In between are the niche ProLite and Vintage series. That’s it, easy-peasy.

The new AQ2 extends the market pioneered by the much-copied Jungle series and small-footprint SSE sets, but goes further in cleverly covering all bases. Or should that be basses, since the AQ2 is offered in five initial shell-packs with 14", 16", 18", 20" and 22" bass drums. You can almost hear Sonor’s design and marketing teams slapping one another on the back.

Although the AQ2 looks typically Sonor, it represents a major overhaul with lots of up-market features and components. As such this is not a cheap starter kit but more of a mid-priced aspirational set. Gone are the 9-ply poplar shells of the SSE to be replaced by the former Force Select maple shells.

These have a mix of three plies of Chinese maple enclosed on the outside and the inside by twin plies of Canadian maple – making seven plies in total. Snares, toms and small bass drums (14", 16") have 5.8mm-thick shells while 18" (illustrated), 20" and 22" bass drums are 7.2mm.

The AQ2’s elevated spec continues with the finish - the old plastic wraps replaced by four high-gloss lacquers plus a single Delmar White Marine Pearl wrap for the traditionalists. The review kit is in eye-popping and beautifully silky Aqua Silver Burst. It’s a stunner, but maybe not everyone’s cup of tea and the alternatives are rather more restrained Titanium Quartz, Brown Fade and Transparent Black. (In passing, note the AQ1 also now has lacquered shells which are derived from the former Essential Force shells of Asian birch.)

The AQ2’s maple shells are coupled with complementary lacquered maple bass drum hoops which add further to the up-market image. And they feel a lot tougher than some Sonor Asian wood hoops we’ve encountered in the past. The claws are probably the only giveaway to the AQ2’s intermediate status, being pressed steel rather than cast. Still, they look decent enough and have the now obligatory isolating rubber liners.

Each drum has a full complement of lugs - and these too are newly designed, although typically Sonor with the twin-mallet logo. They are cast and, as with all the hardware, radiantly chromed and polished.

The next stage of the upgrade involves a new rack tom suspension system. The unobtrusive SmartMount steel plate connects solidly with two upper lug brackets, and is well isolated by thick rubber gaskets. The design allows you to remove the batter head without having to upset the bracket, an essential improvement on earlier RIMS-style mounts which are/were a real pain when changing a head.

Supporting the Smart-Mount is the also-new CTH 4000 combination cymbal and tom holder. And if you fancy swapping out to a second mounted tom it’s easy to replace the cymbal holder with a second tom bracket. Which brings us to another cool aspect of the new series. On top of the five AQ2 shell-pack configurations Sonor is making available any of the individual drums - toms, kicks and snares - to buy singly as add-ons or to configure your own kit.

Before setting up the whole kit the 14"x6" snare beckons. It’s quite a heavy drum, with its 10 lugs and 2.3mm super-hoops. The strainer and butt - previously employed on the Force series - are Sonor’s basic models, but much stouter than most. These are all good signs since many budget snares are flimsy, the tell-tale cost-conscious component in cheaper kits. This one though has the feel of a drum twice the price. And thankfully so does the sound, with its luxurious, almost chocolatey tone, and snare-rich scrunch.

At six inches it’s a little deeper than you expect with a small-sized kit, but it makes for a warm contrast with the edgy immediacy of the other drums. Sonor has applied carefully graduated and cut snare beds with accurate 45° bearing edges, ensuring the drum is focused and easy to adjust.

Likewise the accompanying toms. With classic dimensions of 12"x8" and 14"x13" they suit the bright presence typical of maple. The sound is pure and modern with the single-ply coated heads affording good sustain and punch.

The defining constituent is, of course, the 18"x14" bass drum. It’s a diameter made popular by small group jazz greats like Elvin Jones and Roy Haynes, yet the 18" diameter kick didn’t enter the catalogues until the late 1960s. So the early bebop classics were mostly cut on 20s, and 18" has only since become a go-to for small group jazzers. It does not have to mean jazz exclusively though.

First impressions - you lose the ultra-tight bonk of the jungle/drum’n’bass 16", but don’t quite achieve the full-fat roundness of a 20". In fact, this drum turns out to be quite hard, abrupt and knocky, especially given the clear single-ply Remo Powerstroke 3-style UT batter. Alternative head trials beckon; perhaps an Aquarian Super Kick or Remo FeltTone?

It’s small enough that you don’t need a lot of (or any) damping, but inserting a small towel considerably warms and deepens the pitch. With miking-up and judicious EQ-ing, an 18" can be versatile, emphasising the deeper frequencies or the higher, pushier regions. With the tighter, harder sounds of the digital world, a drum like this can surely fit into multiple styles.

The key point really is that Sonor offers the option of five AQ2 bass drum sizes - from 14" to 22". And with their quality, thin-ish Canadian maple shells and maple wood hoops (not steel) they are all offered at an affordable price, not the small fortune that an 1 8" late-’60s Ludwig Jazzette would set you back. It’s a really smart move for the modern scene. Way to go, Sonor.

Since this is a moving-up kit, the hardware is sold separately. The HS LT 2000 package seen here is Sonor’s entry-level series but is, like the drums, heavier than expected. It’s an update on the HS200 reviewed back in August 2015. Although single- (not double-) braced there is a fair amount of steel involved and this set is definitely no pushover. In tune with the current trend, the tripod bases of the cymbal/snare stands are redesigned so that they can work as standard triangular tripods, or you can push them down so they become trendy flat-based stands. Particularly appropriate with this small-sized Bop kit.

Design-wise there are few frills, but all the components do their job well enough. The bass pedal has a typical single chain over a circular cam drive. It has a newly-smooth and good-sized hinged-heel footboard and a full stabilising baseplate. Which the hi-hat does not - it has a classic wire frame stabiliser instead. It also has a direct chain pull with no adjustment, although it hardly matters as the tension feels right.

As for the snare stand, this has a welcome continuous (non-ratcheted) basket angle adjustment where the cymbal stand tilters have fine-toothed ratchets. All the stands have monster rubber feet, stable enough for the firmest of players.