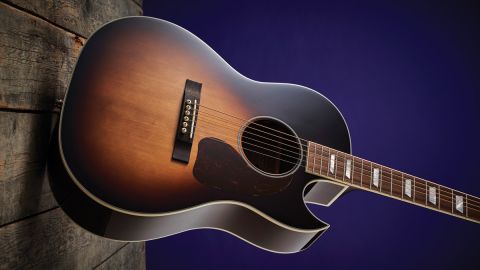 In 2007, the line was discontinued by CF Martin & Co. For four years, Sigma faded into virtual anonymity, but in 2011 it was picked up by German company AMI Musical Instruments and brought back into production, only this time in China (prior to this they’d been made in Japan and Korea).

Sigma is now a strong, reputable brand in the marketplace and offers a good variety of instruments. It’s not the acoustic bass, mandolin or ukulele we’ll be reviewing though, but one of the latest in its line of steel-strung SG series guitars.

The sigma LGMC-SG100F model has the aura of a smart, chic guitar with an urban edge. Visually, its most distinctive feature is the Florentine cutaway, which looks like a teardrop, or a speech bubble for a graphic novel. It is elegant and has something of a rococo flourish to it.

The solid sitka spruce top features a sunburst hue - not your fiery red type, this one has a creamy ochre tinge giving it a slightly austere edge, so this guitar may not be for the Little Richards out there.

Like the top, the dark mahogany back and sides of the guitar have been lacquered to the nth degree with a high gloss, which contrasts well with the more subdued matt of the neck (also made from mahogany).

The guitar comes with a useful allen key for adjusting the truss rod to your bespoke string height, though, given the gloss, a mini fire extinguisher wouldn’t go amiss.

The spruce top features a very necessary tortoise-shell pickguard for such a highly burnished instrument. Like art and Lutherie’s Roadhouse Tennessee Red we reviewed a couple of months ago this guitar also has smart white binding (an industry standard plastic composite) looping around the top and back and circling the sound-hole, emphasising its clear-cut edges.

On the tuning head, ivoroid knobs have such a clean, unembellished design you’d think they were made from real ivory (not cotton fibres dissolved in nitric acid). The reverse of the headstock reveals open- geared grover nickel machinery - a fitting juxtaposition of design elements all neatly packed at the top of what is a well designed and considered instrument.

The sigma LGMC-SG100F has a bright, responsive sound (the hard bone/ compensated saddle transmits sound instantly to the soundboard), which contrasts well with my sublime, gravelly, cold-infused, baritone vocals. Move over Richard Hawley. The guitar’s chordal playing sound is percussive without too much buzz.

It does a particularly good job of Tchaikovsky’s choral work, ‘the crown of Roses’: the tenor and bass parts show the guitar to have hidden depths in the lower melodious range, while the top end has some sweet tones that could add dulcet murmurings to your solo playing.

The strings are at the optimum height, so the action is swift and the smaller body (compared to an 000 or jumbo size) makes it a snug instrument to play. Our left hand handles the neck with ease and the trapezium shaped mother of pearl fingerboard markers decorate the micarta fingerboard (in all the standard places) making it easy to navigate.

It’s worth noting that if there is a + sign after the code on the box the fingerboard will be made of micarta - if not it will be rosewood, owing to changeover due to cites.

Comparing the Sigma with an instrument with similar specs for front back and sides - in this case a Blueridge BR-43 000, the Sigma shines. Not only does the cutaway give it a distinct advantage - the action, tone and playability are all of a markedly superior nature. With both guitars pitching in the same price range, it’s pretty obvious which one you’d go for. While the Blueridge is obviously a larger bodied instrument, the sigma packs a high punch that leaves the other low and dry.

The harmonics and resonance at the top end of the Sigma are something we’ve not heard before. Immediately after the 16th fret on the top e string, where the fingerboard meets the body - the reverberations take on a sustain-cum-chorus effect, even when playing staccato.

After stopping the note you can still hear the harmonics - as if echoing in the far-off depths of a cave. It’s a slightly eerie effect and in no way detrimental to the sound unless you need absolute silence between breaks in the music.

Unlike many other acoustic fingerboards, this one does not continue infinitely into the sound hole. In fact it finishes a good two to three centimetres before the sound-hole and immediately in-line with the innermost edge of the Florentine cutaway. This is some carefully-considered design and a leading reason why it feels so easy to play at the top end. Any awkward left-hand stretching is left at the wayside and it feels like you could be playing at the seventh, or even the fifth fret.

There’s no nut for straps at the neck-body join so you’ll need to take a strap around the neck. In terms of acoustic performance, the Sigma provides enough versatility of tone to capture most repertoire with convincing aplomb - from fingerstyle, to easy jazz and blues. With electronics in place as well the sigma can take this repertoire further afield.

The Fishman Sonitone electronics are discretely placed inside the soundhole. There are two easy-to-use dials - one for volume and one for tone (though it’s probably worth noting that the tonal change was very subtle at the volume we were playing it - bedroom level).

The amplified sound quality is good, though we do detect a slight muffled translation of the sound through the ACUS amplifier. Whether it is the electronics or the amplifier causing this it is hard to tell. We will admit though that since reviewing the Hughes and Kettner acoustic amplifier
my view of acoustic amps has changed quite significantly.

Frustratingly, the guitar doesn’t come with a gig bag, though Sigma does offer hard and soft cases on their website, so it’d be worth getting one if you’re thinking of purchasing. If you do, Sigma is currently urging artists to send video-links of you and your instrument in performance. The current page on the website showcases a wide variety of singer-songwriters, along with a smattering of ensemble recordings too. It’s a positive exercise and some of the recordings are of superb quality - so why not join the fray?

The Sigma LGMC-SG100F’s high quality, unfussy finish and strong tone make it worth the pounds for a mid-range guitar. If you don’t want the cutaway, Sigma offers the LGM-SG2+, though visually it’s not as exciting and probably wouldn’t be worth the motorcycle shot in Sigma’s collection brochure.

With only three years to go till Sigma’s big 50, you might wonder what it has in store for the future: if they are developing models with dynamic new bracing, ultra light-weight tops, or memory foam necks. Probably not the latter: Sigma has produced a guitar here which is perfect for gigging, playing at home, but probably not for busking.