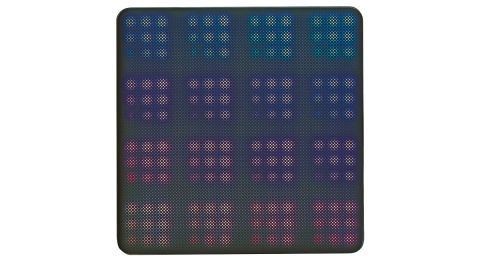 London-based company Roli has risen to prominence over the past few years with its Seaboard range; a unique take on the traditional piano format that offers string-like expression via Multidimensional Polyphonic Expression (MPE) technology.

Its latest product, Blocks, is an attempt to incorporate the same technology into a more affordable package.

So what is Blocks? Roli calls it a ‘modular music studio’. The ‘modular’ part of this tagline refers to the three hardware elements that can be purchased and used in a mix-and-match manner. The central element is the Lightpad Block, a rectangular, rubber-topped control surface incorporating MPE technology so it can be played using a variety of expressive gestures. This can be supplemented by the Live and Loop Blocks, which are button-based controllers - the former handles Scale, Arp and Chord modes for the instrument controlled by the Lightpad, while the second offers an assortment of controls for transport, BPM and quantise settings.

The ‘studio’ element of Blocks comes in the form of an iOS app, Noise. Noise is a free app available whether you own the hardware or not. It offers preset drums and instruments with more available to purchase in-app, including signature packs from Steve Aoki and RZA. Owning Blocks hardware unlocks a number of extra sound packs too.

Unfortunately, as a self-contained ecosystem, Blocks’ reliance on Noise is its downfall. Noise is, if we’re being generous, a mixed bag. On the positive side, the actual sounds it contains are strong; the instruments are powered by Roli’s impressive Equator sound engine, while the sampled drum kits are punchy, characterful and well produced. Playing a single preset instrument using the Lightpad’s MPE surface is fun and expressive, allowing various preset sonic parameters to be manipulated via pressure, slide, velocity and aftertouch gestures.

The app’s Scale, Chord and Arp modes are nicely implemented, particularly when used in conjunction with the Live block, which makes a neat tool for inspiring melodic patterns. Beyond that, though, Noise begins to feel painfully limited.

Each of the Blocks hardware elements is wireless, connecting to a computer or iOS device via Bluetooth. Every element is equipped with magnetic metal connectors, allowing the Blocks to ‘snap’ together. This connection isn’t strong enough to keep multiple Blocks together firmly when being held by hand, but it will keep them in place together on a desktop. These connectors also allow several to be charged from a single USB connection to a central Lightpad. Dashboard can also interface with the Blocks over USB, which allows it to be used with non-Bluetooth equipped systems.

Projects are constricted to a set division of one drum kit and three instruments, and while each of these slots can be filled by any preset, there’s nothing in the way of customisation. There’s no way to mix and match sounds within a drum kit, for example, and while sounds can be tweaked by dragging a finger around the Lightpad interface, none of these parameters are labelled and there’s no way to tailor drum sounds for yourself.

Moreover, at the time of writing, there are countless ‘serious’ music making features missing. There’s no audio/project export and no inter-app audio or audiobus support, meaning that the only way to get your creations out of the app is to share your work online with other users via the Noise website or record from your device’s headphone jack (assuming it still has one!)

There’s no overdubbing either. Recorded a beat loop but decided you’d like to add another element over the top? Your only option is to start from scratch and attempt to ‘finger drum’ the whole thing in one go. Further still, Noise has no way to edit loop lengths, no pattern copy/paste, no mixer, no mute, no solo, no sync capabilities, no built-in effects... the list goes on. The result is a system that feels more like a technology demo than something designed for actual music makers.

Fortunately, the arrival of Dashboard - currently in public beta - does address this somewhat. Dashboard is a desktop application allowing the hardware to be configured as a general MIDI controller. It contains a variety of pre-made set-ups configuring the Lightpad as a playing surface, drum pad, fader bank and even a couple of basic video games. Users can create setups using C++ coding too.

While this opens up the potential of the Blocks hardware considerably, Dashboard merely controls the MIDI messages outputted via the hardware, meaning that users still need to set up mapping themselves in their chosen plugin or DAW. While there are some applications that already accept MPE MIDI - Bitwig, Kontakt and Omnisphere to name a few - even in these situations, setup is hardly ‘plug-and-play’. In most scenarios a fair amount of assignment and customisation is required. It’s worth noting too that with Dashboard the Loop and Live Blocks merely offer on/off buttons, and none of their Noise functionality is carried over unless users set this up in software for themselves.

Max or Reaktor ‘power users’ or C++ coders are likely to be the ones who get the most out of Dashboard. The average producer, however, is still underserved - Noise is too shallow to appeal to all but the most inexperienced music maker, while Dashboard lacks the immediacy to hold the attention of casual users.

Does this mean Blocks is a write off? Not necessarily. The idea of a portable, accessible MPE controller is definitely appealing, and when controlling purposed-built sounds, the Lightpad is a great controller.  It needs to be unshackled from the weak framework of Noise, and possibly from iOS reliance altogether. If Roli bundled Blocks with a desktop version of Equator, or FXpansion Strobe, and threw in some third-party mappings, then it could be a great control system. As it is, it feels like an interesting proposition wasted by confused implementation.