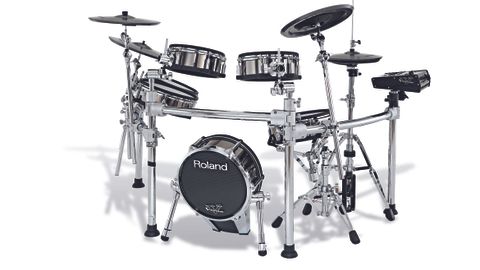 For this kind of money one would expect some pretty groundbreaking stuff. Thankfully, Roland hasn’t failed to deliver with the endlessly customisable TD-50. It’s absolutely brimming with new features and edges ever closer to the realism of an acoustic kit.

Japanese technology giant Roland has been a front runner in the production of electronic and digital instruments since the early ’70s.

Despite a host of new e-instruments hitting the market across 2016, including a saxophone and a cajon, it’s the company’s new flagship V-kit electronic drum set that us drummers have been itching to get our hands on.

With an impressive list of new features, the TD-50 promises big steps forward from the previous TD-30 model. Despite a non-stop schedule for the only kit in the UK at the time of writing, we’ve managed to get one into the Rhythm testing studio for a few days. Let’s take a look.

For review we have the TD-50KV with the brand new KD-A22 bass drum option. Designed to replace the batter head of your existing 22" bass drum, the Kick Drum Attachment (KD-A) features a thick, dense pad just above its centre which sits over a triggered mesh head. The remaining surface features a solid cover, giving it a rugged feel that also protects the internal electronics.

Rounding out the package is one CY-14C crash and one CY-15R crash ride cymbal pad (the latter was once used as Roland’s top ride trigger) and, of course, Roland’s steel rack system which has been raised slightly to accommodate a 22" bass equipped with the KD-A22. All of this will set you back a wallet-wrenching £7,259. The KV is also available with a KD-140-BC bass drum pad if the A22 isn’t your bag.

The smaller (and considerably more budget-friendly) standard TD-50K set-up is supplied with a KD-120BK pad, the new digital snare and ride, and then three 10" tom pads, smaller 12" and 13" cymbal pads and the smaller VH-11 hi-hats. The TD-50 module is also available as a standalone purchase for £2,279.

Probably the most noteworthy aspect of the TD-50 launch is the brand new digital ride and snare pads which now plug into the kit’s module via USB. The 18" CY-18DR not only feels more like a real ride cymbal thanks to its size and weight, but is also designed to respond more realistically thanks to multiple sensors on its surface.

The bell section is now effectively a separate pad which enables it to react to a much wider range of dynamic levels. The cymbal is also mutable merely by resting your hand on its bow. The 14" PD-140DS snare pad uses the same digital technology to perform much more realistically than any previous model – combining more typical piezo-electronic sensors with new electrostatic technology.

The snare shell is actually made from steel rather than plastic which gives it the essence of a real drum. Not only does it look and feel considerably more like a snare drum but it’s possible to achieve a wealth of different sounds depending on the positioning and the velocity of each stick strike. It also has a clever automatic cross-stick recognition feature, but more on that when we get hands on.

The module itself plays host to 50 kit presets which utilise Roland’s brand new Prismatic Sound Modelling engine, leaving room for another 50 custom user kits. Gone is the old TD-30 processor; the new kit has been treated to a more powerful, upgraded processor which enables it to perform an array of neat features. Namely, with the TD-50 it’s finally possible to import your own samples via the in-built SD card slot.

These can be allocated as a primary sample, triggered by a chosen pad, or blended with other samples using the new ‘sub-instrument’ menu. How about adding more punch to your floor toms with a subtle kick sample? Or maybe layering some tambourine on your snare drum or hi-hats?

You can even set a ‘blend point’ for the secondary sample, meaning it will only be heard at a certain velocity – a feature that some may recognise from Roland’s SPD-SX sample pad.

The SD slot can also be used to play full tracks or loops, controlled directly from the ‘song’ menu. It’s then possible to record a drum take to your chosen track, which is automatically saved to the external card. The recorded drum track can then be exported as MIDI – a very smart feature. What’s more, you can now save your custom kit creations and recall them on another module, meaning drummers can share or trade kits with other users.

The saved kits retain all of your customisations, including any imported samples. Other noteworthy features of the TD-50 include balanced left and right XLR master outputs in addition to the standard ¼" jack outputs (meaning no more DI boxes for stage or studio use), a new routing engine which allows, among other things, the kit mixer to control only the headphone monitor mix without altering the front-of-house mix, 10-channel USB audio that allows multi-track recording straight to a computer, and kit chains have been replaced with ‘Set Lists’ and users can name and save up to 32 separate lists.

A new menu layout means general navigation is a little easier and also accommodates the increased functionality well. The new page up and down buttons to the right of the LCD display combine with the standard F1-3 buttons along the top to open up access to multiple banks of tabs and sub-menus, each crammed with a frightening number of possibilities.

Within the mix settings alone it’s possible to access multi-FX (up to three), compression and EQ. Within these options, each trigger can be altered completely independently.

New ‘R’-dials situated under the display relate to particular parameters on screen at any given time, meaning less button pushing. Each dial is surrounded by a funky LED ring which can be colour-coded from kit to kit. Useful for grouping kits by category, or just having your own private disco.

Despite a wealth of kit presets, the new instrument samples are limited. Roland’s European Drum Product Manager Jules Tabberer-Stewart explains that they have chosen quality over quantity for their new sounds and are in no rush to push out more.

This means less choice than we’re used to (ie: just two ride cymbals and two hi-hats), but a much higher level of customisation, including shell depth, head and muffling options, microphone positioning, cymbal size/thickness and even ping level/type. The new transient menu also allows for deeper customisation of individual instruments and samples.

Playability has been undoubtedly improved by the larger sizes of the 14" snare pad and 18" ride in particular. The new digital technology brings not only an extended range of dynamics, but also a more familiar, dare I say, acoustic feel to the table.

Having a wider range of sounds available under-stick makes it seem more like the sound is being drawn from the drum rather than a computer. This is assisted by no noticeable latency through the module, making my time at the the kit an incredibly satisfying experience.

Is it just like playing an acoustic kit, I hear you ask? No, not yet. But it’s a damn sight closer than it has been in the past. The triple-ply mesh head of the PD-140DS feels plenty durable and if you’ve checked out any TD-50 demo videos featuring Michael Schack, you’ll know they can stand up to a sound thrashing.

When detecting a hand on the drum the PD-140DS automatically switches to prevent any mis-triggering, too. Ghost notes are still playable with the fingers, which is a nice touch.

The CY-18DR ride is almost as impressive as the snare but, in comparison, lacks the same level of distinct tonal reactions. In its defence, the pad reacts far more realistically than anything else we’ve tried, but it still has a little way to go before reaching the realms of a ‘real’ cymbal.

The additional sensitivity of the ride cymbal bell is especially welcomed and brings it ever closer to that end goal. Gone are the days of having to attack the bell to elicit the correct sound, and by tinkering with the trigger settings, it’s possible to fine-tune the dynamic range and personalise it to individual playing styles.

The KD-A22 attachment is a great concept and, combined with the larger pad sizes elsewhere on the kit, really gives the TD-50KV more credibility as a ‘proper drum kit’, especially suited to those drummers who might intend to use one live.

The kick attachment plays well and offers a fairly realistic response. It still produces a fair thud from the kick drum, so perhaps not right if your TD-50 is being used as a practice kit, although only using the TD-50 for practice would be doing the potential of this kit a massive injustice.