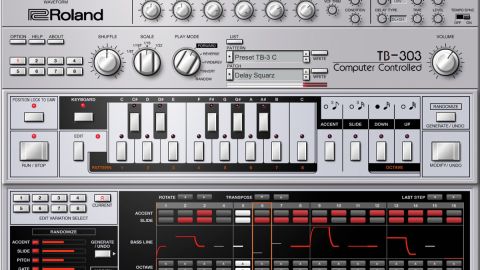 The definitive software 303 emulation is easy to sequence and sounds great, but the subscription could be a turn-off.

It took Roland an age to finally get into the virtual instrument market, but over the last couple of years, the company has nailed it with the Legendary Series of plugins.

Available only by subscribing to the Roland Cloud service, this gradually expanding library of classic synths and boxes reborn in software form - TR-808 and 909, SH-101, Juno-106, Jupiter-8, JV-1080, D-50 and more - has put the Japanese giant at the top of the Roland emulation game, previously dominated in its absence by Propellerhead, AudioRealism and D16, amongst others.

The latest in the Legendary Series is one that many dance producers have had on their wishlist since the Cloud first appeared: the TB-303 Bass Line. Launched on ‘303 Day’ (3 March 2019) to celebrate the 35th anniversary of the original synth, TB-303 Software Bass Line is built on the same ACB (Analog Circuit Behaviour) modelling as its stablemates. If you’re already a Roland Cloud subscriber, waste no more time reading this review and go get it, cos it’s flat-out wicked. If not, pricing is £18.50 per month, £185 for a year, £325 for two years, or £745 for five years of membership. That gets you not only TB-303 Software Bass Line and its many Legendary Series siblings, but also the Aira System-1 and System-8, and a ton of ROMplers drawing on a wealth of sampled Roland gear.

Designed to generate a very specific kind of sound (see A brief history of the Roland TB-303), the synth itself is as simple as they come. A single oscillator, with a choice of saw or square waveforms, feeds into a 24dB/octave low-pass filter, with six knobs governing Tuning (up to an octave either way), the level/filter boost applied to Accented steps (see below), and the Cutoff, Resonance, envelope Decay and (very quirky) Modulation of the filter. And that’s it! It’s not really possible to make the 303 sound ‘bad’, which is a huge part of its charm and one of the main reasons for its success and longevity.

Clicking the Panel button, however, pops out extra Software-only controls, including VCF Trim (extending or shortening the filter cutoff range) and Condition, which dials in subtle tuning and filter fluctuations to artificially ‘age’ the synth. It also houses two simple effects modules: Drive and Delay, with a couple of adjustable parameters each - Tone/Depth and Time/(wet) Level. Drive offers five distortion algorithms and a Compressor option, while Delay lets you choose between two Delays, two Chorus types, Flanger and Delay+Chorus. They all sound good enough for some easy glamourising.

While you can trigger TB-303 Software via MIDI, this is a synth that was absolutely built to be sequenced. In the old days, that meant setting note pitches, accents and slides one step at a time via a fiddly button-operated ‘workflow’, but the plugin modernises things with a far more practical step-sequencing interface, and a choice of five playback styles (Forward, Reverse, Fwd/Rev, Invert and Random).

The global timing is still set by the Scale and Shuffle knobs, but note editing is done graphically. Either select a step, then click a key on the six-octave keyboard below to set its note, or drag the note bars directly up and down in the display, which - very weirdly until you get used to it - scales its range based on the highest and lowest notes in the sequence. Slides and Accents are activated using the buttons at the top, the latter represented visually by note-linking curves; the pattern length is adjustable from 1-16 steps; and Transpose and Rotate buttons enable vertical and horizontal shifting of the entire pattern.

A brief history of the Roland TB-303

The battery-powered and totally analogue Transistor Bass 303 was launched in 1981, alongside the TR-606 drum machine, to provide ‘realistic’ bassline accompaniments for guitarists. Sounding nothing whatsoever like a real bass player, and being less than intuitive to program, it only sold around 10,000 units and was discontinued in 1984.

Three years later, Chicago-based group Phuture (featuring the legendary DJ Pierre) got their hands on a 303 and set dance music careering down a new path with the release of the seminal Acid Tracks. Acid house was born and suddenly the 303 was a must-have instrument for every DJ and electronic producer in the States, then the UK and Europe. Indeed, for many, it’s remained equally indispensable ever since, commanding silly prices on the second hand market to this day, despite the introduction of the impressive TB-03 remake in 2016.

In 1996, Propellerhead famously changed the music software game with the watershed release of their ReBirth RB-338 application, emulating two 303s, along with an 808 and a 909. Since then, there have been a few other software versions of the mighty silver box, but Roland’s is the most authentic yet, as you’d expect.

A variable Randomisation system generates complete patterns (snapping notes to a user- defined scale if required) and variations on existing ones at a click; and patterns can be dragged directly out from the plugin to the host DAW as MIDI or audio clips. It’s a perfectly effective setup, although we’re genuinely a little sad to see that the original step-by-step system, which, with its linear, old-school approach, could engender very different results, isn’t an option.

In terms of preset management, TB-303 Software can address up to 64 Banks of up to 64 independently loaded Patterns and Patches each, with eight variations per pattern switched via MIDI or the buttons at the top left of the interface. That’s a lot of sounds and riffs accessible from directly within the plugin itself.

Head in the Cloud

If you’ve never used a 303 before, note that it serves up a limited range of very identifiable sounds. Think Chicago/acid house and techno - aggressive, rolling basslines and screaming, filter-swept leads. Its magic lies in its ‘playability’: bash out a pattern, map the six main synthesis knobs to your MIDI controller (automatically, if it’s a Roland TB-3 or TB-03) and go wild with the envelope, filter and pitch. It’s as much fun as you’ll ever have with a synth, and we can happily report that Roland’s virtual take sounds as close to the real thing as we’ve heard in software.

Yes, it’s an issue that you can’t just buy TB-303 Software outright, but Roland’s Loyalty Program does let you choose one instrument for each year you subscribe, so full ‘ownership’ is eventually possible. Want the 303 sound in your DAW, with easier sequencing than the original? This is one of the best ways to get it.