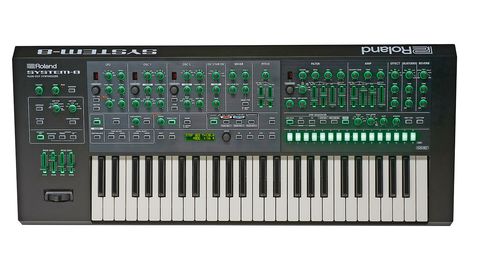 The System-8 covers a vast sonic territory with superb flexibility – from vintage Roland tones to futuristic sounds, it truly delivers.

From the TR-8 and TB-3 to the System-1 and now the System-8, Roland’s ACB (Analog Circuit Behaviour) technology definitely delivers the goods, capturing the essence of Roland’s classic analogues.

Whilst the System-1 sounded great using its own engine, it also gave us the first glimpse of Roland’s tasty Plug-Outs (which could reside both in the synth and on your computer).

Designed by the AIRA team (a separate division within Roland), the System-8 can be viewed as the System-1’s big brother and then some!

It’s an eight-voice, ACB polysynth with its own powerful native engine, accompanied by the Plug-Out slots into which you can place your choice of any three Plug-Outs from the Roland Content Store. The S-8 ships with Plug-Out versions of the Jupiter-8 and Juno-106, arguably Roland’s two most-loved polys. We’ve already heard these engines, (albeit at lower resolution/polyphony) in the Boutique JP-08 and JU-06 modules.

Built into an all-black plastic case that closely follows the form-factor, profile and build of the JD-XA ‘Crossover’ synth, the S-8 looks sleek and feels solid, yet it’s very portable and manageable for one person. Like other AIRA products, the main control panel is black brushed aluminum (non-reflective), and all dials and sliders are backlit with green surrounds - great for dark studios or on stage.

The backlighting system can be dimmed to taste (unlike on the ’XA), and the panel has been cleverly designed so that only the controls relevant to the engine or Plug-Out being used are lit (so you know where your sound or plug-out is set). All dials feel tight and solid with little-to-no wobble, and the rubberised backlit selector buttons feel great in use too (all this is in line with other AIRA products). If you wish to personalise your S-8 further, Roland also offers wood and aluminium side panels for an extra £49.99.

Roland is once again using their 49-note synth-action keybed from the JD-XA (with slightly shorter keys), which feels positive and fast to play but with a nice amount of resistance. However, unlike the XA, there’s no aftertouch, so for real-time modulation you’ll have to use the mod-bender or the control pedal input. Assigning the mod-bender is straightforward, and the four sliders directly above control the amount of pitch or filter change applied by the pitchbend or mod lever.

One notable here is that there’s no dedicated ‘Mod LFO’ as on the JD-XA, so you can’t have independent LFO, filter or amp speeds/settings for the mod lever. The pitchbend range slider has no markings for semitones on the panel so (for example), it’s hard to accurately set pitchbend range for +2 or -5, (+2 actually translates to around 44 on the parameter display). Otherwise, the interface is excellent, patch selection is easy using the bank and number buttons, and it’s all very intuitive with little menu diving.

The native S-8 engine has the widest range of tweakable parameters on offer, and it’s a serious powerhouse synth even without the Plug-Out options. It’s duo-timbral and has two main modes (Patch and Performance), with the main engine for the S-8 and Plug-Outs running at 2-channel, 32-bit float, 44.1 to 192kHz. A Patch is a single mono/unison/poly sound, and a Performance allows splitting, layering, and switching between any two sounds. Performance mode doesn’t currently store sound tweaks, though, so if you select a bass from the S-8 engine and a pad from the Juno Plug-Out then tweak the settings and save the performance, those tweaks aren’t kept. Hopefully this will be solved soon.

Roland’s Plug-Out system allows you to purchase and import new engines into the three Plug-Out slots via your DAW (an SD card slot allows you to store extra patches too, but not upload plug-outs). The improved Jupiter-8 and Juno-106 engines really do have the key inherent characteristics of the original synths. The Jupiter-8 emulation is certainly a very powerful synth, and it can sound close to the original, it’s the Juno Plug-Out that really stands out in terms of authenticity and vibe. Both now have polyphony up to eight notes, matching the original Jupiter and expanding on the original Juno. Having owned a Juno-106, We honestly wouldn’t spend the money on a vintage 106 again - the S-8’s take on it is so close to the original and sounds wonderful, without the reliability headaches. Even the Juno’s spectacular chorus sounds spot on, right down to the tweakable noise, and can really transform the Juno’s basic sounds. Our review unit shipped with the SH-101 plug-out in slot 3 (which we loved when we reviewed the System-1) but you could also add the excellent Promars, SH-2 or System 100, turning the S-8 into a completely different synth.

The System-8’s MIDI-syncable and super-accurate LFO goes into the audio range and can be sent to filter, amp and pitch simultaneously via three dedicated dials. While there’s only one global LFO, that one LFO does have two ‘variation modes’, with Variation 2 adding a second ‘stealth LFO’ to modulate the first, and Variation 3 adding a resonant pulse LFO. There are also six wave types on offer, including random and sample and hold, so you get plenty from your one modulating oscillator.

As for the main oscillators, the S-8 engine offers a versatile setup capable of a huge range of tones, from future-electronic to classic vintage, and it all sounds precise yet warm and musical. There are three ACB oscillators available, and Oscs 1 and 2 are identical, except that the first has cross-modulation, compared to Osc 2’s ring mod and sync.

Under ‘Variation 1’, each oscillator has six standard waveforms, Saw, Square, Tri, and ‘Super’ versions of each. Variation 2, has a batch of six more unusual waves including NoiseSaw (a more gritty dual saw-type sound), Logic (introduces aliasing at extreme settings), FM and FM+Sync, (it’s very easy to dial in classic linear FM-like sounds), Vowel and Cowbell. These are all indispensable additions to the S-8’s sonic arsenal.

The Colour dial (per-oscillator) controls the defining character of each wave type (PWM, shape etc) and can be modulated by the pitch, amp or filter envelopes, or via Osc 3 or the LFO. That’s a very impressive complement of sonic power, and all without entering a menu! Osc3/Sub really helps to thicken and underpin sounds (it becomes the famous Juno-106 sub when using the Juno Plug-Out) and offers sine and triangle waves at various pitches.

The filter system is similarly versatile, with three variations. These can sound very analogue or future- digital, but always musical. Variation one houses a self-oscillating LPF/HPF (each with 12, 18 and 24dB slopes); these modes sound great all-round for pads, brass, leads, basses and FX (and the LPF produces great kicks using the self-oscillating resonance).

Variation two houses six SideBand filter variations, which allow you to highlight or remove areas within your sound. Sending the LFO to the filter, then band-tweaking via resonance works particularly well here. System-1’s Low-Pass Filter is also present, plus there’s keytracking, amount to envelope, and a separate High-Pass Filter with a high cutoff resolution. There’s loads of filtering to get your teeth into, and some really unique textures are possible, especially with the SideBand filters.

No synth is complete without envelopes, and the System-8’s are punchy and tight, suitable for anything from slow fading pads to super-snappy drums. There’s an ADSR for the filter and the amp (both are velocity sensitive), and also a two-stage pitch envelope for detailed time-based pitch-sculpting. A mod envelope would have been great, but then the sequencer does record knob tweaks with or without notes, so there is a way to live without one.

The sequencer, by the way, (step or real-time) is a very intuitive scratchpad and ideas generator, and it’s polyphonic as well, so if you want to record up to eight single lines or a mixture of chords and singles lines, the S-8 makes that childsplay. There are various scale and quantise values, shuffle, first/last step, key trigger and playback modes including random and invert, plus forward/reverse settings (although it misses keyboard-led transposition and a click track).

As the S-8 is two-part multitimbral, you can only use or address two sounds simultaneously, whether internally or over MIDI... but then again, the S-8 is more synth than workstation. Nevertheless, four parts (a part per engine) would have been ideal.

For a final touch, there are three blocks of simple but great-sounding effects. The first block features overdrive, distortion, bitcrusher, metal and fuzz; while the second block features great delay and modulation effects such as chorus and flanging; and the third showcases reverbs. The effects are all of excellent quality and musical throughout, though the reverb is fairly metallic without shaving the tops in the menu system. You can also record your FX tweaks into the sequencer, too, which is great.

To conclude, based on this excellent native engine alone, the System-8 is well worth the price of admission. Throw in the Juno, Jupiter, the audio interface/CV capabilities, the sequencer, a decent vocoder (plus audio inputs with dedicated FX) and it’s hard not to be impressed!