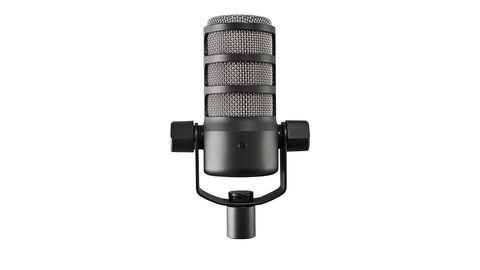 A well-made, robust dynamic mic. its design and frequency curve are best on speech, but it also works as an instrument mic.

Podcasting is on the up, big time, and that means demand is growing not only for affordable but also functionally specific hardware.

The recent launch of its Rødecaster Pro all-in-one production studio shows Australian microphone manufacturer Røde is taking this market very seriously, so it should come as no surprise that it is also extending its established broadcast mic range (Broadcaster, Procaster and Podcaster mics) with a new podcast-specific model.

The PodMic is a mid-size end fire dynamic cardioid mic. The grille styling is reminiscent of both its Procaster and Podcaster mics, and the classic Electrovoice RE-20, so looks instantly at home in a broadcast environment. The body-mounted swing clip is designed for table-top stands as well as studio boom arms or regular mic stands. There’s also an internal integrated pop shield. At around 17cm long, the mic is big enough to have some physical presence but also small enough that if you had a few dotted around the table top they wouldn’t get in the way. At just under 1kg it’s also nice and chunky. There’s no included table-top stand, which is a shame. However, Røde’s own metal base stand would add a modest £20 to your bill.

As expected, PodMic is designed primarily for speech and, as mentioned, the capsule grille has an integrated pop shield. Dynamic mics are far less sensitive to plosives than condensers, so it’s not something that you might deem necessary. However, preventing plosives early on, particularly if trying to avoid time-consuming post production, is wise. With regular speech a few inches away from the grille we had no obvious problems with plosives. Move in a bit closer or right up to grille and a few pops did sneak in. Nevertheless, these were not dominating and would likely go unnoticed. Our efforts to overload the capsule with ever more exaggerated plosives weren’t really successful either - good news.

Sonically, we found the PodMic quite interesting. The cardioid pickup pattern is reasonably tight, which is ideal for multiple mic setups. Mid-range articulation is good and the mic doesn’t sound overly bright in the higher frequencies. There isn’t a massive proximity effect, which means you need to get in quite close to achieve a richer, deeper voice sound. These findings pretty much match Røde’s frequency plot, which also reveals an obvious scoop in the low mid frequencies.

Overall we thought the response of the mic was ideally suited to broadcast, delivering a ready made sound that shouldn’t need much tweaking. We also tried the mic on some other instruments. The tailored response isn’t ideal, but still, the restrained proximity effect and low mid scoop actually handled a boomy close-miked acoustic guitar pretty well.

So, any negatives? The swing clip, although nicely engineered, doesn’t provide much clearance at the socket end of the mic. So if you try and orientate the clip in line with the mic there isn’t enough room for a regular XLR plug. This can make adjusting the mic less slick than it could be. Nevertheless, overall the PodMic is a well- conceived (and executed) mic that captures podcast and broadcast-ready audio with minimum fuss.