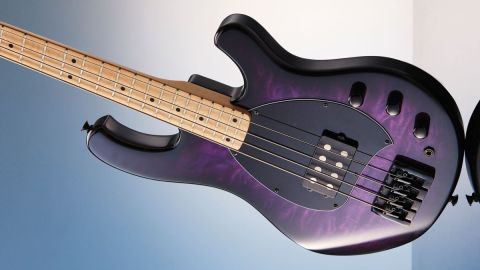 We fully appreciate that this may well irritate anyone who voted for Brexit last year, but there is something rather splendid about the fact that it makes legal and economic sense for an Italian bassist to come to the UK for the manufacture of a signature instrument.

As the clock ticks down towards our departure from the EU, let’s enjoy the fruits of that union while we can. The backstory behind this and the other Retrovibe basses is that the brand, founded in 2010, continues as its own range but is now manufactured by Stephen Chown and his team - hence the rather lengthy title of the instrument. We’ll refer to it as the 504 for the purposes of this review, though.

For £480, you’re getting a lot of spec. Active and evidently influenced by the classic Stingray design, the 504 comes with a single robust humbucker, a slim neck and a total weight of only 3.8kg. Four bolts anchor the neck solidly enough, while the 24 frets are cleanly dressed, the maple fingerboard feels well-finished and the body is portable but solid.

Of course, an Indian-made bass at this price point doesn’t look or feel luxurious, but that’s not what we’re after. For this much outlay, what you want is a reliable, well-constructed instrument, ideally with zero flaws, that you can use as a backup or starter instrument without worrying too much about someone stepping on it backstage.

As you’re probably sick of us saying every month, in the current golden age of affordable basses we can expect a near-perfect instrument for around the £500 mark; if we’d been writing this 20 years ago (or God help us, 30 years ago) there would have been a strong chance of this bass being a bit of a plank. Fortunately, there’s not a thing wrong with the 504 that we can detect, although many of the parts inevitably feel standard.

Plug in and relax; this is a simple bass to play and enjoy. One volume, two EQ controls, no switches, no faffing about. Much as we genuinely love the £5000 barn-door instruments loaded with 800 microswitches that we review on a regular basis, sometimes it’s nice to settle down with a bass that doesn’t require three hours’ intensive study to operate.

There are no helpful detentes on the controls, but as Ronnie Scott said, you can’t have everything - where would you put it? - so you’ll have to figure out the flat tone yourself. Once you’ve found it, you’ll be chuffed with the 504’s chunky, hollow, woody tone that makes you feel as if there’s loads of potential.

The instrument doesn’t have a mid boost, obviously, so you’ll need to dig in hard if you find your sound obscured in your band; keep a thick pick handy. Roll on the top end and there’s a crispy, zippy sound waiting for you; at the other end, a warm dose of bass will thicken up the tone nicely.

The 504’s secret weapon is its neck, a super-playable feature that lovers of narrow nut-widths will relish. It’s only 38mm here, allowing you to hammer-on those blues-box fills like a master or mistress of legato and throw the horns to the crowd with your picking hand, should you so desire. Bassists of the slap persuasion may prefer a wider string spacing and should therefore be warned, but if you like your bass necks compact, try the 504 at all costs.

The (deep breath) Retrovibe EVO Davie504 Signature Bass by Chowny hits exactly the right balance. It’s a classic template, made affordably, that plays effortlessly - and it won’t break anybody’s bank. The 504 may be affordable, but any bass which makes you feel like a better player than you actually are is priceless, if you ask me.