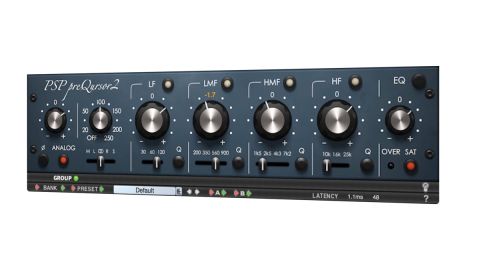 A superb musical EQ with bags of analogue soul and an uncanny ability to bring out the best in ‘live’ instruments and mixes.

Originally part of the sQuad bundle, PSP Audioware’s PSP preQursor2 (VST/AU/RTAS/AAX) is a ground-up rebuild of its vintage-style EQ plugin, featuring a new “Advanced Analog Modelling” engine, and adding in mid/side processing, a steeper Q option for each channel, and an input saturation stage.

Despite its skeumorphic UI, PSP preQursor2 is an original design and not based on any particular hardware model. sQuad doesn’t appear to exist any more, so preQursor2 is now sold as an individual plugin, although owners of v1 should find a free update on their PSP Account page.

PSP preQursor2 is designed to deliver ‘musical’ - as opposed to ‘surgical’ - equalisation. While a surgical EQ is geared up for extremely narrow, precisely positioned cuts and boosts, preQursor2 is all about the gentle shaping of frequency response curves in order to sweeten acoustic guitars, drums, vocals, full mixes and other spectrally sensitive material in a ‘broad strokes’ kind of way.

It does this via four adjustable bell-shaped frequency bands (plus a high-pass filter), which are relatively gentle when boosting and more sharply notch-like when cutting (up to 15dB for both). Each band centres on one of a strategically selected set of fixed frequencies, with low-resonance peaks ensuring that the continuation between bands when boosting is ringing- and artefact-free.

The original preQursor incorporated output overdrive. As well as retaining this, the sequel puts a separate preamp circuit on the input and builds saturation modelling into the EQ filters themselves. Both are activated by clicking the Analog button, and twisting the Analog Drive knob increases the amount. This is extremely subtle preamp saturation of the kind you can’t always easily hear. The Group button lets you link any number of preQursor2 plugins in a project, so that adjustments to the Analog Drive switch or knob in any one instance are mirrored in all others. Using this, you can bring that cohesive analogue console feel to a mix, and globally bypass/amplify/attenuate it with ease. Even stacked up like this, though, it remains decidedly polite. The output distortion is far more obvious. Activating the Sat button switches in a soft clipper that levels the output signal just below 0dB for wonderfully warm-to-crunchy limiting.

With its simple, classy look, preQursor2 is as easy on the eye as it claims to be on the ear. The photorealistic GUI follows the standard PSP layout, handling Bank and Preset saving and loading, A-B comparison, and launching of the PDF manual in the bottom bar, with all main controls housed in the ‘fascia’ above.

At the far left and right ends are the saturation controls, which are covered in Saturation station. Next in from the left is the high-pass filter, which steps up through ten frequencies, from 20-250Hz; and above that is the expanded channel processing switch, with which preQursor2 can be put to work on just the Left, Right, Mid or Sides channel, as well as the default Stereo option.

The EQ frequencies of the four main bands - Low, Low Mid, High Mid and High - are set with the notched sliders below, which step from 30-120Hz, 200-900Hz, 1.5-7.2kHz and 10-25kHz respectively. By default, the bells are indeed very shallow when boosting, but they get progressively narrower as the gain is increased (or decreased), aiding in the sort of intuitive tonal sculpting described above.

The new High Q mode (activated by clicking the Q button for each band) sharpens the peaks and notches up considerably, bringing a new element of targeting and focus to preQursor2 that can only be beneficial in terms of versatility.

preQursor was already one of PSP’s best EQs for ‘real’ instrumentation and the mix bus, and v2 is a meaningful evolution of it. We’d be lying if we said the overall improvement in sound quality brought by the new engine was night and day (it doesn’t need to be - it already sounded magnificent), but the extra saturation, High Q mode and M/S processing certainly enable it to do things it couldn’t before.