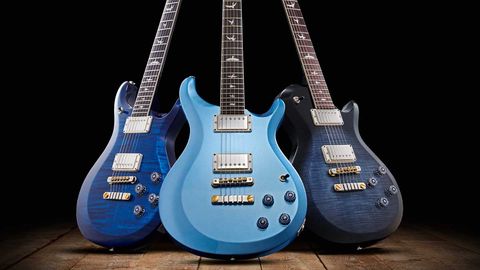 This trio of S2 McCarty 594s are super-playable, versatile and incredible value for the money. The Thinline is the pick of the litter, but whichever you choose is going to reward you with a premium performance.

NAMM 2020 was such a relentless cavalcade of awesome new gear that it was hard to keep track of it, so it really is saying something that one of our stand-out recollections from Anaheim was of PRS's trio of McCarty S2 594s.

The McCarty S2 594s were our best guitars of the show on the rationale that they brought PRS's boutique, top-end quality within the reach of more players, exemplifying "PRS strengths in building, with its commitment to delivering those qualities at accessible prices for more players than ever."

Not to say that the McCarty S2 594s were cheap per se. Starting at £1,649 for the S2 594 Thinline, with the S2 594 Singlecut and double-cut McCarty S2 584 priced £1,849, these are not guitars for beginners, but they are genuine US-built PRS guitars costing around half the price of the Core models, and similar to other US production line instruments from the likes of Fender and Gibson.

There's a lot of spec here, so where's best to start? Well, how about a quick explainer as to the name. The McCarty is named for Ted McCarty, the visionary former Gibson president who was a huge influence on Paul Reed Smith, and the 594 designation derives from the guitars' 24.594-inch (625mm) scale length. The regular McCarty, lest we forget, is 25 on the nose.

As to the S2? Well the S is for Stevensville, the location of PRS’s USA factory; and it is S2 because this is the more affordable second production line.

Right, to the guitars...

Let's turn our attention to the S2 McCarty 594's bridge first. Here we see PRS eschew the more commonly sighted vibrato or PRS Stoptail design for a typically inventive twist on the Gibson tune-o-matic setup, with a separate bridge and open-slotted tailpiece holding the fort here.

The bridge has wide-topped brass saddles and is nickel-plated cast zinc. The tailpiece is cast aluminium. Unplated brass is used for saddles, saddle screws, studs, and thumbwheels.

• PRS McCarty 594
The Core model 594 is simply one of the most highly-tuned instruments money can buy. Dynamic, expressive - it purrs, it roars. Not for the first time do we find ourselves cursing Mr Smith and his team for their continual quest for a better tonal experience.

• PRS McCarty SC 594
We guarantee that the monetary investment in this PRS will be rewarded with tone, playability and jealous gazes aplenty!


This build is exclusive to Core 594 models and these 2020 S2 594s. Because there's no vibrato, PRS can go full-on vintage here and choose some non-locking Kluson-style tuners. These have got slightly shorter string posts than of those on the Core 2020 McCarty.

Another key difference is found in this S2 594's controls layout, which takes a Gibson-esque approach in positioning a three-way toggle selector on the bass-side horn with two volume and two tone controls within easy reach of the picking hand.

Production of some parts is outsourced to Asia. Originally designed for the SE Hollowbody, the pickups are designed by PRS and manufactured in Indonesia. This, as we'll get to soon, is no big deal; they sound exceptional.

These S2 models all share a nitro-over-celluse (CAB) finish that PRS has rolled out across its US-line (only the DGT and Private Stock models will be finished with regular nitro).

The S2 McCarty Singlecut 594 is the big beast of the 2020 S2 McCarty models. It's the heavyweight (3.8kg/8.36lbs), the muscle, and there are no prizes for guessing the influence behind it.

The Singlecut's body is 3mm deeper than the S2 McCarty 594, and with both sharing a 13mm maple cap, that switches up the mahogany/maple ratio in favour of the former, and we'd expect that to play out in the Singlecut's tone.

As for tweaking that tone, once again we see the move away from the PRS "diamond" arrangement of controls in favour of a Gibson-style lineup. The lampshade knobs are pure PRS, though.

Indeed, the Singlecut shares much of the build and appointments of the S2 McCarty 594 and the Thinline. All three guitars here use the same circuit, with Alpha or Jin Sung 500kohms audio taper pots. The wiring is modern-style. There are no treble-bleed caps on the volume controls but there is a pull-switch on the tone control for a coil-split.

Measuring some 43mm deep, the Thinline is – as the name suggests – the thinnest build here. While it shares a similar chamfering to the other S2 models, with no recesses for controls, there  is no maple cap. This is all mahogany. A play for the SG market? Quite possibly. It's a similar recipe.

Like the SG, the three-way toggle switch is billeted close by its quartet of controls (two volume, two tone with coil-splits).

Weighing just 2.9kg/6.38lbs, the Thinline immediately ingratiates itself to the lower back – but will it win over the heart?

As it transpires, yes. The Thinline is outstanding. But then all three S2 models have abundant charm.

It's thematically apt that the svelte, maple-free Thinline body is matched by a Pattern Thin neck profile that's super-speedy, measuring just 21mm deep at the 1st fret, with a mild taper seeing it widen to 23mm at the 12th (slightly less tapered than the Pattern profile as seen on the Core McCarty 2020 model).

While this is not quit in sharp contrast to the Pattern Vintage neck of the Singlecut and S2 594, both have a clubbier feel, with those necks measuring a hair over 22.5mm at the 1st fret and bang-on 25 at the 12th. It is all a matter of preference, of course; both neck profiles are comfortable, and this trio are playable.

Tone-wise, all three reference guitars far beyond their years, all three have that honeyed quality to their voice, but the coil-splitting and controls offer a wide range of tones that make putting these S2s into any one box. Sure, the Singlecut turns the clock back to the Les Paul stylistically, and it's raw humbucking voice has that thick, warm voice, and that fundamental integrity in the sustain.

As we said earlier, don't underestimate the 58/15 ‘S’ humbuckers just because they're not US-made. They'll still blow your mind. But with the single-coil mode you can access all kinds of in-between voicings. There's a P-90 quality to them that makes them ideal for old rock 'n' roll and blues.

Being able to mix, say, the neck's single-coil with the full humbucker of the bridge is a huge deal. There's so much to experiment with here before you start tweaking your amp or look to the pedalboard for inspiration.

The S2 594, meanwhile, parks itself on the Core McCarty's lawn. The single-coil tones are a little less treble-forward than the Core model but have a lovely musical clarity. It translates well when the humbuckers are engaged – it's a warm, organic and supple tone, but with plenty of definition.

Where the Thinline pokes through the mix is in that midrange. It trims some of the fat off the bass response and softens the high-end. A little overdriven crunch reveals some classic SG behaviour – that bite, the growl, the effervescent. But while it certainly references the SG, there is less in the neck.

Its proportions are of a piece with PRS. In many respects it reminds us of the Mira. Like the Mira, it doesn't have the fancy-pants maple top, though there are birds on the fingerboard, classing it up a bit.

But there's more oomph here than the Mira, and there's more to the Thinline than just being a riff on the SG. It's a rock 'n' roll machine in its own right, with just enough attitude to be heard over its maple-topped siblings.

Maybe that is part of its appeal; it wears the metallic blue finish well. But whichever you dress up this trio of S2 McCarty 594s, they are testament to PRS's ability to downsize without attenuating the awesome feel and tone of its instruments, and it is putting more and more pro-quality instruments within reach of the average player. Hey, we called it in January, back at NAMM. These are show-stoppers.

MusicRadar verdict: This trio of S2 McCarty 594s are super-playable, versatile and incredible value for the money. The Thinline is the pick of the litter, but whichever you choose is going to reward you with a premium performance.

The Thinline's circuit and controls are the same as on the other S2 McCarty 594s but the three-way toggle switch is moved down by the tone and volume controls.

The 58/15 ‘S’ humbuckers were originally intended for the SE Hollowbody range but we should celebrate their wider release as they are among the best PRS has designed.

No vibrato, no locking tuners. Instead we have these vintage-style  tuners with faux-bone keys.

The Singlecut offers a lot of that hefty LP vibe but with the coil-split you will find some off-the-map tones.

The heel is neatly constructed. The S2 necks are three-piece affairs.

The level of engineering on the bridge and tailpiece is stunning, with "raw brass" saddles, screws and thumbwheels.

The switching options make for happy tone-hunting. You'll find a lot of joy mixing and matching the single-coil and humbucker tones.