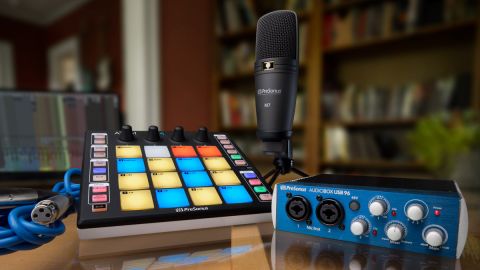 This bundle from PreSonus looks, on the face of it, to be aimed primarily at beat makers, but actually contains just about everything you need for music production, and is especially geared towards those new to this most glorious of pastimes.

Starting with Atom, this compact and sturdy, 16-pad grid controller has been around for a while, and has deep integration with PreSonus’s own Studio One DAW; you get a cut down version of that (Artist) bundled with it.

Artist is one of the most filled ‘lite’ versions of a DAW that we have come across, giving you a very good flavour of the full Studio One, a DAW that really does deserve more praise and profile than it gets.

We should also mention the other software thrown in at this point – Ableton Live Lite and a library of samples – but really Atom’s deeper integration understandably lies with Presonus’s own DAW.

And while you can control other software with Atom – it will easily trigger Live’s clips, scenes and Drum Rack, for example – its pairing with One is so deep that you can even use it for playing melodies (it has a Push-style keyboard option) as well as the more obvious beat-making options.

Next up we have the AudioBox USB 96 bus-powered audio interface, which again impresses with build quality, and will easily handle your basic audio (and MIDI) connectivity with a couple of combo mic/instrument inputs.

And talking of mics, the last bundled piece is an M7 large-diaphragm condenser microphone, which is a good all-rounder and will do a decent

• Native Instruments Maschine Mikro
Not a bundle, but if you are looking for a small but perfectly formed controller, the Maschine Mikro comes with full versions of Massive, Monark and Prism thrown in and represents excellent value.

job of capturing your vocals. OK, it’s no Neumann, but when you add it to the other hardware, it gives the Producer Pack another level of flexibility, making it a great bundle for using both in the studio and on the road. But that’s not the best bit.

The bundled price for all three is just £175, which is impressive given that Atom alone sells for well into three figures on its own. If you’re starting out, then, this will do everything you need, and some, for very little outlay. Just add monitors or headphones.