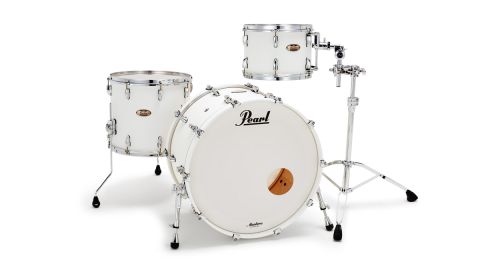 Pearl goes on tinkering with and refining its longstanding Masters line and in this latest Maple Reserve version we see a genuinely effective blend of the vintage and the cutting edge.

In the world of Pearl you have the Masterworks and Reference series right at the top.

Designer series with umpteen choices of shells and finishes. Then you’re into the Masters, a series that’s been going forever and has so many variations it’s easy to get completely befuddled.

Now Pearl has trimmed the Masters down to just two variations - Masters Maple Reserve (MRV) and Masters Maple Complete (MCT). These are equally professional quality drum kits, but cheaper largely on account of the variations being restricted. In particular MRV has thin shells with reinforcing rings, while the MCT has straight sided shells.

Often when drum companies say maple they mean maple with various fillers. The Masters Reserve is 100 percent maple of that North American variety so beloved of drum builders. It’s also taken off the same stack that Pearl uses for its Masterworks shells.

MRV is a 4-ply shell, 5mm thick, with a 4-ply reinforcing ring, top and bottom. This means the basic 4-ply shell is thinner, at 5mm, than that of the MCT, which has a straight-sided (no re-rings) 6-ply shell of 5.4mm thickness. The shells are built using Pearl’s scarf-jointed Superior Shell Technology (SST) and the interiors are as attractive as the exteriors. Lightly sealed, natural honey-coloured maple with carefully finished 45° slopes rising up to the sharp, waxed edge, with a single-ply counter-cut.

Other differences between MRV and MCT include the MRV’s 1.6mm FatTone hoops where the MCT has beefier 2.3mm Superhoops. And the MRV is bumped up to Reference-style hardware where the MCT makes do with the old Masters hardware. This means the MRV has aluminium OptiMount tom suspension, while the MCT has the heavier black, steel version.

Where the MRV edges it too is in the choice of finishes. Both MRV and MCT have just four standard colours, but the MRV has the further option, at no extra cost, of 28 special order colours taken from the Reference inventory. These range from Red Wine, through Black Gold Sparkle to Antique Walnut, to Purple Craze and so on.

The MRV’s stock finishes are Bombay Gold Sparkle, Saphir Bordeaux Sparkle, Twilight Burst and the review kit’s Matte White, which has a satin chalk appearance, but is super-smooth to the touch. It should be, as Pearl boasts a 31-step lacquering process.

Lugs are Pearl’s familiar CL bridge design and if you’re willing to pay extra you can even get your hardware nickel, black or gold-plated. Thus the MRV is veering close to the sort of personalised designer choice offered by the Masterworks and Reference series.

Thin maple ply shells with maple reinforcement rings is a vintage lay-up. Especially when constructed the way that Pearl’s are, with overlapped scarf joints.

This was common in shells from the 1960s and earlier. The difference with the MRV shells is the bearing edges, which were rounded in the old days, whereas these new ones are 45 degree and pretty sharp.

Accordingly the MRV shell gives a sound which has elements of old and new. There’s the warm, reverberant timbre of the thin-shelled maple, the focusing of the re-rings, plus the accurate tuning and snappy assault enabled by the precise edges. Although the MRV is advertised as fitted with Ambassador tom batters, this kit came with Clear Pinstripes. We admit to being a bit sniffy about twin-ply Pinstripes since their 1980s heyday passed and we all got preachy about single-ply Ambassadors and the joys of open, un-damped tuning.

But a funny thing happened. Out of the box the floor tom had been left quite slack and the Pinstripe coped fabulously well. It had a dark, rattling slap, but whereas that might be followed by a dead (slack-tuned) thump from  a lesser shell, it unleashed a rounded deep and throaty roar from this one. Due no doubt to that thin, high quality build and precise edge again.

Pearl’s 1.6mm FatTone hoops are triple-flanged steel, but look more like double-flanged stick-choppers. This is because the top lip is folded over and in and then flattened, not fluted out as is usual. So your sticks are cushioned by the flattened folded steel on top of the hoop.

You may never play rim-shots on the toms, but the hoops look cool and they have a touch of extra resonance which animates the drums. Now for that big beautiful bass drum, which has much in common with the sort of kick that went out of fashion in the 1970s. A modern 18"- or 20"-deep bass drum will never produce the classic big band clout and fast tonal response of a Rich, Paice or Bonham. This is for several crucial attributes.

For starters it’s a vintage size, 24"x14" - ie: large diameter with shallow depth. And second it’s because of that thin maple shell with maple re-rings and the overlapping scarf build. These are the structural elements that Rogers, Slingerland and Ludwig drums had up to the 1970s. The difference again is the modern, sharpened bearing edges. Something which, incidentally, restorers are sometimes asked to apply to vintage drums that have uneven, rounded edges to make tuning easier. Butchery or practical sense, you decide. But Pearl has obviously done this to add a modern clarity to a vintage sound.

This is all a long way of saying that here’s a drum that has a properly vintage construction, with modern touches. And yes, it translates into the desired sound. A big, loud blast, a little one-dimensional and hard because of the shallow depth. Reverberant, but with a tidy decay, as you’d expect from a shallow drum. Great for those big band - or more likely big rock - pushes and accents.

Granted there are other modern touches - the Powerstroke batter head, the front head with a mic hole, the full-sized, adjustable internal pillow. But these don’t detract, they just help to shape the basic sound to suit the circumstances. Maybe you’re close miking for live or recording, etc. But you could easily go for full single-ply coated heads and felt strip dampers if you wanted to go the whole vintage hog.